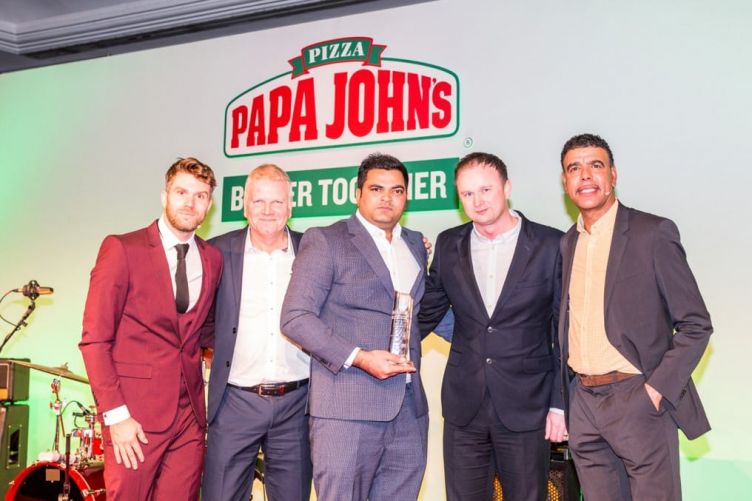 Abid Hussain has won the prestigious award, which is for franchisees with five stores or less.

He was officially recognised for his achievement at Papa John’s biggest ever UK franchise conference, which was held in Birmingham recently.

Abid, who runs Papa John’s in Bedminster (Bristol), Eastleigh, Fareham, Newbury and Taunton, says: “I wasn’t expecting to win an award at all.

“My success is down to my staff. I have great managers working in all my stores and the team behind each of them ensures we deliver fabulous service and top quality pizza every time.”

Motivating his teams and ensuring they have what they need in terms of equipment, plus good training, is key to keeping the best people, according to Abid.

He adds: “I’m proud that all my managers have been with me since I joined Papa John’s in 2016 and we have grown the business together. I know that if my people are happy, so are our customers - it makes good business sense.”

Before investing in Papa John’s, Abid worked in advertising and marketing in London and was also a consultant for an internet company.

“Papa John’s was something a bit different,” he says.

“I was looking for a new challenge and a friend of mine ran a Papa John’s store. I did some research and thought buying a franchise could be a great move for me. The rest is history.

“I have plans to open several more stores in the future, so am looking forward to growing my portfolio of outlets with the help of my great team, plus the support of Papa John’s.”

“I know several of his managers were also nominated for awards, which is a testament to the strength of his training and management skills,” Phil explains.

“It’s great to be able to recognise the hard work and dedication of Abid’s whole team in this way.”

Start your own Thérapie Clinic franchise

Send a free enquiry to Thérapie Clinic for further information!

Start your own Kidslingo franchise

Send a free enquiry to Kidslingo for further information!