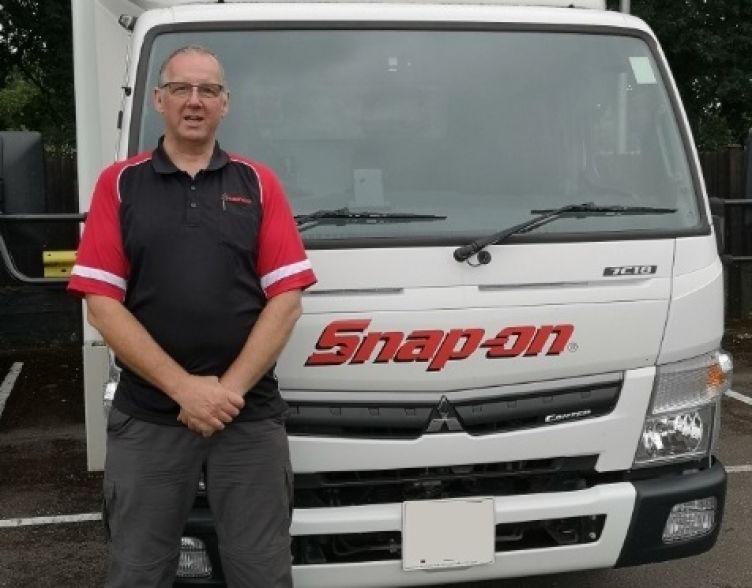 With yet another national award shortlisting in the bag and a network that’s going from strength to strength, it’s no surprise that people are ready to join the global tool giant. In the last month, 23 ambitious franchisees have either hit the road or will soon be training to launch their own Snap-on franchise businesses across the UK.

Former construction manager, Jonathan Garside, is just one of the brand’s newest recruits. Like many who choose to become Snap-on franchisees, Jonathan had no automotive experience and had never run his own business. So, what prompted him to take the leap into business ownership, and why Snap-on?

“I reached a point in my career where I felt that the construction industry was getting a bit too cutthroat for my liking,” said Jonathan. “Everything was becoming more and more cost orientated and less and less about quality and customer service. Two things which I’m passionate about and which, coincidentally, are synonymous with Snap-on!

“I was first introduced to Snap-on in 1990 when I bought some tools from my local franchisee. I was so impressed with the quality. I’ve been a raving fan since that day! And I’m finding that my customers now still feel the same way. The products are of top quality. It’s my job to provide the best support possible and to be a genuine service to my customers – they trust the tools and now, they trust me too.

“When I joined the franchise, I came in with a grand plan for the future in terms of earning and financial stability down the line. To date, I’ve exceeded my goals with a manic first few weeks. If you’re prepared to put the hours in, then the rewards are there. I’m only sorry I didn’t do it years ago!”

As national franchise manager, Lisa Law, explains, demand for the Snap-on franchise continues to rise: “As more and more people are determined to take control of their future, we’ve seen a near-constant stream of enquires for the franchise from the Highlands of Scotland down to Bournemouth and in between. Even with a network of over 400 franchisees, we have opportunities for vacant territories, where people can launch and build their own business from scratch, as well as resales, where an existing franchisee is looking to move on, and their business is for sale. The opportunity combined with the level of support we offer is clearly resonating with people, now more than ever.

“Eight new starts hit the road in September, we have nine more in for training in November and another eight already booked onto our January training course. I’m so proud that we’re continuing to do extraordinary things, given what the nation has been through.”

Snap-on Tools is a finalist in the bfa HSBC British Franchise Awards 2020. Shortlisted in the category, ‘Franchisor of the Year’, the brand is in line to receive the most prestigious award in the country. Franchisor of the year recognises every aspect of franchising, from the support offered to franchisees, innovation, financial performance, ongoing growth and of course, most recently, the steps taken to insulate and support franchisees during the pandemic. Winners will be announced on 30 November at a virtual awards ceremony.

Start your own Miss Millie’s franchise