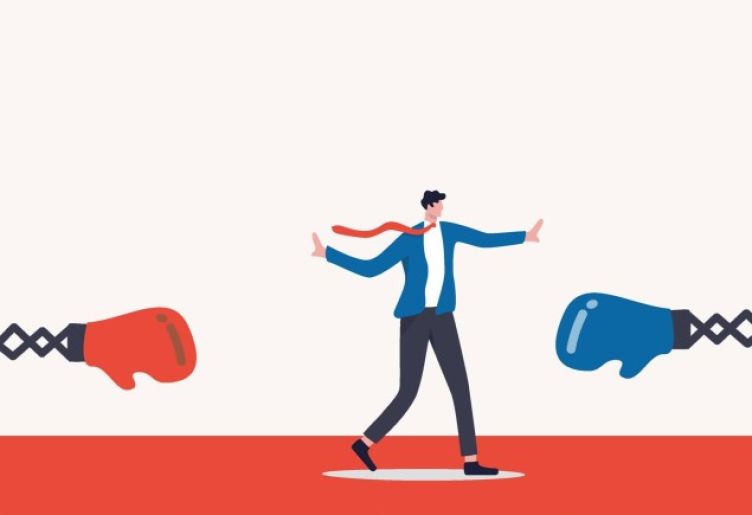 Expert advice on the warning signs, managing of disputes, and why conflict can be a force for good

Franchisees often find themselves as the head of a team for the first time, but conflict is something that affects even the largest businesses. How can small businesses resolve disputes in their team without a multi-million pound HR department?

No one wants to work in a hostile environment but there will always be disagreements in the workplace. It can be financial, such as pay disputes with the cost of living rising, or it can be about work-life balance with hybrid work schedules now the norm, but according to experts the most common source of conflict is something timeless.

Our treatment of others or perceived treatment of others has been driving conflict in and out of the workplace since time began. Marie Coombes, principal resolution consultant at The TCM Group of mediators describes it as being “the root cause of every single case I deal with because the first thing that goes is effective communication”.

James Vincent, UK performance director at ActionCOACH, explains: “That’s where the disputes happen. Because when you think about it, everybody’s different. And there are different personality types and different ways that people communicate.”

Vincent explains: “Imagine if when you started I asked you this: what’s your preferred management style? In order to get the very best out of you? What’s the best way of communicating?” Clarity of communication, particularly from a position of leadership, is vital. Coombes agrees, “It is about getting to know the people that work for you. And adapting your style to suit that person.”

Marie’s own top tip to avoid harmful conflict at work is not about delivering messages but listening. “We need to listen to hear more,” she explains. “More often than not, we listen to respond.”

Especially as the senior party in a dispute, franchisees and managers can go a long way to making employees feel safe to air their views if they feel they are really being listened to. George Karseras, author of Build Better Teams: Creating Winning Teams in the Digital Age and founder of management consultancy firm Team Up describes this as giving team members ‘psychological safety’; one of the three key elements in his formula for a successful team. With psychological safety, George explains: “We can speak our mind, we can be honest, we can say how we feel.”

But how can business owners and team leaders help employees feel safe? “You have to feel like you’re not going to get punished for saying something,” George explains. If team members are berated often and put down, they won’t volunteer their ideas and contributions even if they are excellent.

George also implores leaders and team members to use good ‘technique’ when communicating. He says: “Describe rather than judge, use statements about your own feelings: ‘I feel…’ instead of ‘you are…’.”

The third element of safety George lists is courage. Good teams have people willing to have a tough or awkward conversation. In her mediation work, Coombes agrees: “It’s very important not to allow things to fester.” Always get things out in the open.

During her time as a mediator, Coombes has grown strong feelings about one particular word: “Anything that is termed as banter for me is a red flag.” Of course, part of being a good team involves having meaningful relationships with the other members, but misunderstandings, particularly easy in a hybrid working model, mean relationships can sour quickly. Things can quickly escalate to a toxic situation.

All hands on deck

When things escalate to the point of crisis, this is where teams really look to their leaders. As an ActionCOACH, Vincent has seen plenty of crises come and go, what’s the best way to deal with them? “It requires you to respond. Not react, respond,” Vincent says, “and there’s a big difference between responding and reacting.

It means you’ve got to pay attention. You’ve got to be focused. When the tides are against you, you work smart… and we deal with this now. We get together and we strategise. We look at what needs to change.”

At its very worst conflict can have a devastating effect on our mental health. Toxic work environments can exacerbate pre-existing conditions and change behaviour. If not disclosed this can cause issues, poor performance and widespread tension. For Coombes, the answer to this comes from creating the right work environment.

“It’s about making sure that the employee feels they can speak in confidence,” she says, “it’s being able to have trust in the people that they are sharing that information with, if they can’t trust people or they are sharing information, then they won’t share it. Employees need to know that they’re going to be treated in a respectful way, then a fair way so that they can put their hand up and go, today’s not great.”

Conflict is not a dirty word. Without conflict teams find themselves lacking autonomy, creativity and challenge. Vincent describes it as “an essential part of success. It’s a myth that we need harmony as a team. Actually, we need constructive challenges. So that everyone is challenged at the right level.”

Vincent explains that without challenge teams can actually develop something worse than tension: apathy. “It’s just a bit of fun. Those who aren’t really bothered are rarely competitive.” Karseras agrees: “without any tension. The team is flat. It’s too harmonious. We have groupthink; people are violently agreeing with everything, but maybe we’re not working as efficiently or as creatively as possible.”

Andrew Sansom is a content writer for What Franchise.