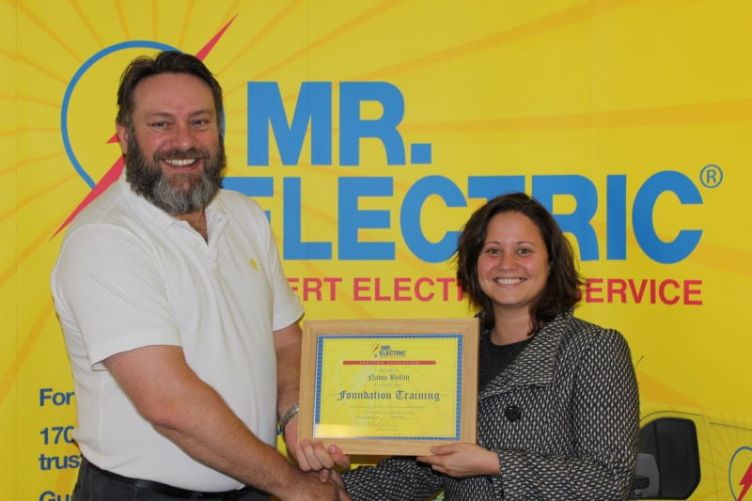 Mr. Electric franchisees Nadia and Rachid Bellili say consideration for the customer is what sets them apart. Trevor Johnson reports

Mr. Electric franchisees Nadia and Rachid Bellili say consideration for the customer is what sets them apart. Trevor Johnson reports

Mud on the carpet, brick dust on the shelves, rings from tea mugs on a polished table. Who hasn’t such tales to tell about clearing up the house after the workmen have finally gone?

“I remember the arguments I’ve had with people who have done work and then left the place looking like a tip,” Nadia Bellili says. “I was determined that after we had done a job you wouldn’t have known we’d been there - apart from remedying the problems, of course.”

It’s a philosophy that’s already paying off. Only four months after Nadia and her father, Rachid, took over the Mr. Electric Canterbury and South Kent electrical services franchise, there’s enough business to keep three electricians and an apprentice busy, while Nadia is already working on plans for further expansion.

“Consideration for the customer is what sets us apart,” she says. “Before our electricians go into a house, they put down a mat and change their shoes for clean, soft bootees. We drum the routine into our staff and even show them videos of how it’s done.

“They must keep their tools on dust sheets and clean up afterwards to make sure everything is exactly as it was. I check with customers to make sure the job was done properly and the electricians stuck to our rules. People seem to like the way we work and we’re getting more and more return business.”

If Nadia’s bringing a fresh new approach to franchising, it’s hardly surprising. Not long ago she was doing something very different - singing in a magic show in remote regions of China.

Perhaps she should explain: “Show business had been a childhood dream and so had gymnastics. When I was 18 I went to dance college in London for two years. I wanted to see something of the world and after college worked on cruise ships as a singer and dancer and thoroughly enjoyed it.”

Then followed two years singing and dancing in a top Greek hotel, before Nadia had the chance to go to China as a vocalist in a magic show and toured remote regions of the country for seven months.

“It was an extraordinary experience,” she says. “Several of the girls in the company were blonde and audiences had never seen anyone with fair hair and blue eyes. Some children were so upset by it that they ran crying out of the theatre.

“One of the worst things about the trip was the cold - I never expected China to be like that - and I won’t be going there again.”

Nadia travelled the world as a singer and dancer for 10 years but began to miss life in the UK and eventually returned to be with her family. After jobs in property management, she joined her father in an insurance loss assessment franchise.

“I haven’t heard of many daughters who can work with their fathers, but we get on well and when we were looking for another challenge we both agreed Mr. Electric was the one to go for,” Nadia says.

“I had worked with electrical contractors in the insurance industry and the franchise wasn’t a complete mystery to me.

“My dad and I have our separate areas of responsibility - I take care of the business management and he looks after the day to day running of the company and deals with electricians and customers.”

Established in 1994, Mr. Electric is based in Waco, Texas and is a subsidiary of the Dwyer Group, which has 13 service franchise brands involving 2,500 franchisees in 10 countries serving over 2.5 million customers.

Mr. Electric now has over 200 franchisees. The company says: “There’s a growing demand for domestic and commercial electrical work and the market is predicted to reach £20.6 billion by the end of next year.

“A franchise owner will have the potential to achieve a turnover of more than £1 million and the estimated time to break even is 12 months.”

Nadia’s franchise supplies electricians for all aspects of commercial and domestic electrical servicing and maintenance work - from basic repairs to rewiring, installations, upgrades tests and inspections, right up to complete support services for large scale businesses.

Many Mr. Electric franchisees already worked in electrical contracting, but others, like Nadia and Rachid, had no previous experience. Franchisees get full training and technical and marketing support.

The company points out: “If you’re a skilled electrician, you are well placed to carry out the work, but you may not have the skills to grow a profitable business. Our system is ideal for an electrical contractor in this position, because we provide you with all the business support you need.”

But whatever their background, buying a Mr. Electric franchise invariably turns out to be a life changing experience. For instance:

• Mark Ryland felt he was unfulfilled in his job as an IT professional.

“I sat down with my wife, Liz, and she asked me why I wasn’t happy at work,” he says. “She pointed out that as an electrical engineer with an MBA, I ought to be running my own company.”

• Lee Ives had been a qualified electrician for 19 years and worked for Mr. Electric for nine years before he bought the franchise from his boss. He now has five technicians in his team.

“You’ve got to be a bit of a salesman - you can’t just be an electrician,” he says.

• Jeff Longley had nearly 30 jobs before he decided franchising was for him. Although not an electrician, he saw the potential in a Mr. Electric franchise and now has a 12-van business turning over £1 million a year.

“Success is all about having the right attitude,” he says.

• Gloucester franchisee Bob Gibson says: “I chose Mr. Electric because it’s more than just a man in a van. It married up electrical work and franchising perfectly and the marketing and support has been great. Other franchises might struggle to provide that level of support.”

“One of the great things about owning a Mr. Electric franchise is the lack of competition in the market - you won’t be an independent contractor battling with other independents, but will be part of a sought after brand,” is how the company puts it.

“And studies have shown 66 per cent of customers said they would always choose a franchise over an independent contracting firm. Mr. Electric has the proven track record of going that extra mile for customers, whatever the electrical or energy problem.

A Mr. Electric franchise costs around £18,000, which includes on-site franchise training, marketing and operational support. Once up and running, a franchisee receives leads for the territory, information exchanges and access to key regional accounts.

“This means we can concentrate on looking after our customers,” Nadia says. And if this sometimes goes beyond the call of duty, that’s fine with Nadia and her dad.

She adds: “We get calls from elderly customers who are sitting in the dark and don’t know what to do.

“Often all it needs is for an electrician to flick the main switch back on and how can you charge an old person for that? If we can help out in these small ways to make someone’s life a little easier, that’s all the reward we need.”