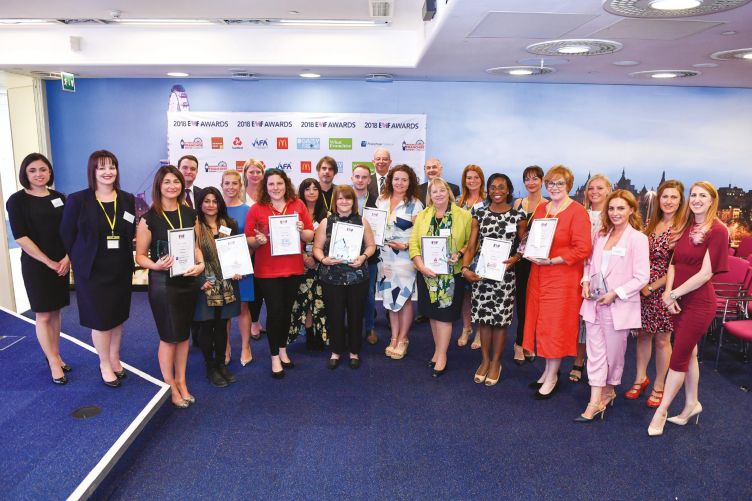 The 8th NatWest EWIF Awards, held on May 15 at the NatWest building in London, was electric with excitement. So in case you haven’t heard, drum roll please…

Jo started franchising Dog First Aid in December 2016, establishing it through 2017, when she exceeded the projected number of franchisees.

Jo says: “From being notified I was a finalist, to the finalists’ black-tie reception and the awards day, I’ve been on an incredible journey.”

Despite opening her franchise less than 12 months ago, Julie made a substantial impact on the Right at Home network and her local area. She more than doubled the average amount achieved by her peers within her first year and receives excellent reviews on homecare.co.uk.

Fiona had an impressive year, attracting new franchisees and devising programmes for business growth. She also moved her headquarters to larger premises with better training facilities. Fiona says: “I am over the moon. It was an honour just to be shortlisted, but to win was amazing.”

Shweta, through the success of her ActionCOACH business, speaks to franchisees worldwide at franchise exhibitions and business conferences. She’s grown her business to a million pound-plus turnover.

Along with some of her clients, Shweta partners with charity ‘Buy1Give1’, providing education for 40 children in rural India.

Ali has been with Puddle Ducks for 13 years. An expert in baby swimming and a respected member of the Swimming Teachers’ Association, she contributes to Puddle Ducks’ ongoing development and creates new initiatives for her network.

As a British Franchise Association Young Franchisee of the Year award winner, Hannah continues to inspire. She implements initiatives for her franchisees, meaning they can connect better with customers and the local community.

Hannah says: “To be recognised for my achievements, in a room of incredible business women, was an honour.”

Passionate about women in franchising, Fiona offers support to 24- plus female-led businesses.

As one of EWIF’s regional chairs, she’s a great advocate for women in franchising, using every opportunity to speak about it.

She says: “A fellow franchisor filmed me winning; it’s unbelievable to watch it back. I was physically shaking and so shocked. I was completely overwhelmed.”

As part of the EWIF 10th anniversary celebrations, Louise Harris from Wilkins Chimney Sweep was awarded a one-off Special Recognition Award, sponsored by Coconut Creatives, for her services to franchising.

“It was an awesome feeling,” Louise says. “I’m delighted to have been given this special award.”

The Overall Woman in Franchising Award was won by Ali Beckman of Puddle Ducks.

Congratulations to Ali and all the NatWest EWIF winners 2018.