Does In-N-Out Burger franchise in the UK? 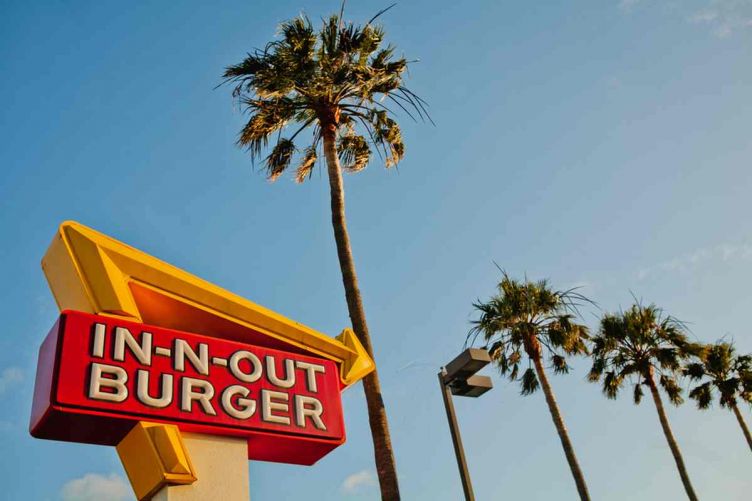 In-N-Out Burger is an American fast-food chain that’s most well known for its burgers. The company is also famously regionally-focused and almost exclusively keeps its stores in California and the American southwest.

And even as fast-food restaurants have struggled in today’s health-conscious world, In-N-Out seems to be doing better than ever. If you understand the intense fandom around this fast-food chain, or have ever tasted one of the burgers yourself, you may very likely be asking yourself: “Does In-N-Out Burger franchise in the UK?”

Well, don’t worry. We’ve got that answer and much more. So, continue reading and we’ll walk you through everything you need to know.

A brief history of In-N-Out Burger
The first-ever In-N-Out Burger was opened in 1948 by Harry and Esther Snyder in Baldwin Park, a suburb of Los Angeles. It would make for the first drive-thru burger restaurant in California. Prior to drive-thru restaurants, carhops were typically used to serve food and take customers’ orders.

The second In-N-Out was constructed just across town a few years later. Up until the 1970s, the Synders worked to keep their business small and inside southern California. By the time Harry Snyder died in 1976, In-N-Out had 18 establishments.

Secret menus and bible scripture
While most fast-food chains are busy expanding their menus and adding in all sorts of exotic items, In-N-Out has decided to keep their menu fairly plain and simple. That is, until you learn about the secret menu.

Using clever word-of-mouth promotions, In-N-Out has developed an elaborate secret menu that remains shrouded in mystery. There are various blogs, websites, and underground magazines that purport to know the true secret menu but nobody really knows for sure what’s real and what’s not.

One of the most beloved and well-known secret features is “Animal Style”. When you get your fries or burgers cooked Animal Style, that means your dish is cooked with mustard and topped with grilled onions and cheese.

Another interesting quirk that people are surprised by is that there are bible verses lightly printed on all of the restaurant’s cups and burger wrappers.

Second generation
After Harry’s untimely death, his 24-year-old son, Rich, would become the president of In-N-Out. Over the following two decades, Rich expanded aggressively. By the early 90s, In-N-Out had 93 restaurants to its name.

It took the company over 30 years to finally expand outside of the Los Angeles metropolitan area, which it did in 1990 in San Diego. In 1992, it opened in Las Vegas, Nevada - its first out-of-state burger joint.

Shortly after opening its 93rd store, Rich Snyder and four others died in a plane crash as they were flying over Orange County, California. Rich’s brother, Guy, then took over as president and oversaw an aggressive expansion of In-N-Out until he died in 1999.

In his short six-year reign as president of the company, Guy expanded their restaurant count from 93 to 140 establishments. Esther Snyder then took over as company president.

21st Century
As the new millenium rolled in, Esther expanded the chain to Arizona, Utah, and Texas. Esther then died in 2006 and passed the presidency onto the former vice president of operations, Mark Taylor. Esther’s granddaughter, Lynsi Martinez, then took over control of the company in 2010 when she was 28 years old.

In-N-Out would open its 300th restaurant in Anaheim, California at the start of 2015. Today, there are currently 347 In-N-Out restaurants serving in six American states. The company currently has plans to expand to the state of Colorado.

There are four major reasons that Lynsi Martinez has given to why she refuses to franchise.

First, there’s quality control. In-N-Out doesn’t ever use microwaves or freezers. The company has a strict policy where it only serves fresh food in its restaurants. This means that In-N-Out need all of its restaurants to be within 300 miles of the business’s distribution facilities.

In-N-Out Burger is responsible for making all of the patties in-house and then transporting them to the individual restaurants.

Second, there’s the appeal of exclusivity. When something isn’t so easily available, it makes it more desirable. It’s this belief that has led to what some would describe as a rabid fandom for the burger chain.

Third, there’s a lot of competition out there. The farther east that In-N-Out expands, the more vulnerable the brand will be to already established burger restaurants.

And lastly, it simply refuses to consider franchising. In-N-Out is a family company through and through, and it would only franchise for financial purposes, which is not enough of a reason in the owner’s eyes.

That being said, the burger chain does run “secret” pop-up events, and in 2018 it set up a small operation at the Carob Tree restaurant in High, north London, for a small group of lucky, in-the-know, burger fanatics.

The fast-food market in the United Kingdom
Over the last few years, restaurant-goers have really started to prefer affordable and on-the-go food. And thanks to advances in technology, ordering food for pickup, delivery, or even just using touchscreens at the location have become both easy and convenient.

In the last decade, there has been a 34 per cent increase in fast-food outlets in the UK. And those numbers are expected to grow.

Fast-food opportunities with What Franchise
While In-N-Out may not have any plans to franchise in the UK anytime soon, there are still many great alternatives worth investing in. Let’s look at the top burger franchises that you should consider being a part of below.

Burger King
Burger King is often ranked among the most beloved fast-food chains in the UK. The chain serves 11 million happy customers worldwide every day. And 90 per cent of its UK stores are franchises, making this an excellent investment opportunity.

A big reason for Burger King’s franchise success is its incredible training programme. Franchisees start off by attending a two-week franchise orientation and then have to complete 440 hours of on-site training in a current Burger King establishment.

If you’re able to sign a franchise agreement, you’ll be given full support. And you can even directly contact the sales profit and operations coach, real estate manager, and director of franchise performance.

If this is something that appeals to you, it’s advised that you start out with at least a £250,000 investment. You’ll also have to pay a one-time franchise fee of £42,951. You’ll also then have to give five per cent of your total sales to the Burger King marketing fund and an additional five per cent in royalty fees.

In order to start the process of becoming a franchisee, you’re first going to need to complete a pre-qualification questionnaire. This will assess your available assets, proposed site, and how compatible you are with the brand. You’ll then go through several interviews to make sure that you’re proper Burger King material.

In general, you can anticipate it taking about one year from starting the application process to opening up your first Burger King franchise.

Start your own Burger King franchise

Send a free enquiry to Burger King for further information!

Five Guys
While Burger King is usually ranked in the top five best burger chains in the UK, Five Guys is usually ranked at the number one spot. Similar to In-N-Out Burger, Five Guys has a pared-down menu and only uses fresh ingredients. Five Guys store meat in freezers and kitchens don’t use microwaves.

Five Guys’ teams prepare burgers at their locations every day and cut and cook their fries from fresh potatoes.

While Five Guys was originally founded in Arlington, Virginia in 1986, the brand hit the UK with a splash in 2013. The Five Guys UK headquarters are currently based in London.

You’ll also be expected to pay a monthly six per cent royalty fee and you may have to pay additional advertising fees as well.

Wimpy
Originally founded in the US in 1934, Wimpy has been serving the UK since it opened in London in 1954. Before you have your own Wimpy, you’ll have to participate in a two-week skills programme. You’ll also get ongoing support in areas such as customer relations, sales, advertising, and marketing.

Which franchise will you pick?
Opening a franchise and having a restaurant to call your very own is an exciting and potentially lucrative opportunity. Although it doesn’t seem like there will be an In-N-Out Burger franchise in the UK anytime soon, there are still plenty of other great alternatives to choose from.