“I didn’t set out to have my own company – I was just in that much demand and someone said, ‘You need more Charlies’!” 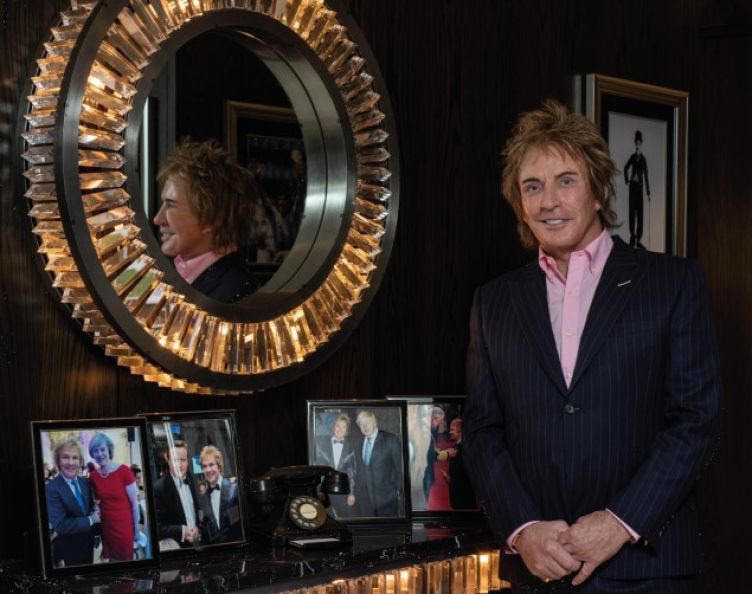 Charlie Mullins OBE sold his £145m business last year to focus on property, politics, and the music industry. Angela Sara West talks to the outspoken entrepreneur about his journey from rags to riches

You may recognise him from BBC’s Question Time or Channel 4’s series The Secret Millionaire or How’d You Get So Rich?, where he took Canadian comedian Katherine Ryan villa-shopping around Marbella…in one of his £300,000 Bentleys.

Or maybe his face is familiar because he once popped round to repair your dishwasher, in between fixing David Cameron’s dripping tap and Simon Cowell’s leaky loo.

The former celebrity plumber to the stars tells me he’s passionate about politics, apprenticeships, and his coveted OBE. “Receiving such an honour from Prince Charles at Buckingham Palace was great! I’m still living off it today! That’s a day I will never, ever forget.”

However, Charlie’s not your stereotypical multimillionaire. He hails from a poor background and says growing up on a rough south London estate drove him to achieve. “At nine, I bunked off school and helped a local plumber, Bill Ellis. He had money, when we, as a family, had nothing. He was the only guy I knew who had anything in life – nice cars, clothes, holidays, a motorbike, a house – all of which was very inspirational. It’s what I wanted to have!”

Bill taught Charlie the value of hard work. “And to do what you say you are going to do and never overcharge.”

He was also influenced by former PM, Margaret Thatcher. “She inspired people like me, who didn’t have the best start in life, to get up and do something. She lit the entrepreneurial spark in a lot of people with the message that self-starters can have a good life. For me, the flame still burns!”

Charlie left school at 15 with very little education and no qualifications. “That was a big mistake,” he says. “I should have left at 14!”

Following a four-year apprenticeship, he became self-employed and worked in Pimlico with Samantha Fox’s dad, a carpenter. “People started calling me the Pimlico Plumber,” says Charlie, so in 1979 he launched Pimlico Plumbers from an estate agent friend’s basement. “I didn’t set out to have my own company – I was just in that much demand and someone said, ‘You need more Charlies’!

“When I was an apprentice, there was such a bad stigma about plumbers – turning up late and scruffy, old vans, not finishing a job, ripping people off. It’s a trade where you need trust, and I didn’t want to be tarred with the same brush. So, I did the opposite – I’d turn up early, wear a uniform, had a good van et cetera.”

Establishing a reliable reputation was key to Pimlico Plumbers’ phenomenal success. “We were very proud of our vans, our uniforms, our image. I think we changed the plumbing industry because a lot of plumbers have upgraded their uniforms, vans, and transparency.”

As a patron of the Prince’s Trust, Charlie is passionate about the provision of apprenticeships, keeping alive his entrepreneurial spirit and commitment to helping young people into employment.

“I’m proud of the work I did with the government to increase the social status of apprenticeships,” he says. “It improved a lot, although there is still more work to do to make them equal to – if not more valuable – than a university education.

“Going back to the very start of my life in plumbing, working with Bill Ellis, I remember him telling me: ‘Get an apprenticeship and you’ll never be out of work again’. He was right, and it’s something I always said to the youngsters at Pimlico. That’s been the most rewarding thing – seeing my apprentices learn from the best in the business, realising they can have a good life if they work hard and gain the skills. I’ve seen kids with similar backgrounds to me complete an apprenticeship with Pimlico and go on to earn a very decent living with the company.”

Every plumber needs a break from pipework and Charlie found the perfect escape plan – and business opportunity – when Pimlico Plumbers grew and he could afford holidays in Spain. “A few friends owned places there and once I saw the incredible lifestyle they were having, I wanted some of it!”

The hunt for the perfect property in a prime location began, and he finally found it in a gated community of nine villas, just 500m from the beach. He bought the villa, as well as the one next door.

Following in Charlie’s footsteps, a few of his crew decided they, too, wanted their own slice of Spain, so Charlie set up Pimlico Marbella, covering the whole Costa. “Doing up my two villas, it was impossible to get the right people here to carry out the work so I used some of my guys from Pimlico Plumbers. A few wanted to move there and now do a lot of work for very wealthy ex-pats, many of whom are London customers with second homes.”

Teamwork for a top franchise

So, what does it take to be your own boss, particularly by investing in a franchise? “The assumption is that an entrepreneur is a loner, but that should never be the case,” explains the great British businessman.

“Yes, they’ll be a visionary and someone who can lead from the front, but they will also need the right people around them. The support of a good team is the difference between a good entrepreneur and a successful one. And the same is true for franchises. If you’re a solo ‘man in a van’, having the backing of a proactive franchisor and the support package they provide is essential – for those running larger franchises where they employ people, surrounding yourself with good people is a no brainer.”

There have been huge challenges on this past plumber’s path to success. Among the biggest? “Undoubtedly, making it back from near liquidation, but also navigating through several recessions and, most recently, the pandemic. They were all tough times, but on each occasion, we came back stronger and won more business. We adapted quicker than competitors, outliving many of them too, to win more of the work out there.”

After building it into a highly profitable enterprise, Charlie sold Pimlico Plumbers last year for a cool £145 million. “I didn’t want to be carried out in a box,” he explains. “Don’t get me wrong, I loved every minute of setting up, growing, and running the business, but I got it to the point where I could move on and try new things.”

Charlie’s now basking in his new role as a business advisor in the music industry. “I’m as busy now as when I was running Pimlico,” he reveals. “I’m working with a fabulous singer called RaRa – she’s a great singer-songwriter who has new music coming out later this year. I love music, and although I can’t sing a note and have never worked in the industry, I am fascinated by it. However, I do know about business, and that’s what I am advising her on. I’ve helped put a great team together for her and her management is really excited. Watch this space!”

Charlie also has big plans for our capital city. “I plan to run for London Mayor,” he discloses. “It’s a big job, but London is my city and has given me so much that I’d like to give something back. I’m good at solving problems, and I see plenty!”

• Don’t try and be the cheapest in the world but certainly aspire to be the best
• It doesn’t matter if you are the best at what you do, but if no one knows about it, it’s pointless. Profile is key
• Have a good team around you and don’t try and do everything yourself. If you want to grow your business, employ more people. One man can only do so much work. But one man can employ 10 and earn more for himself and income for his workers
• Don’t borrow money if you really can avoid it
• Trust your instincts. Get advice, but ultimately make the decision yourself. And always trust common sense…but remember, it ain’t always that common!