INTERNATIONAL WOMEN’S DAY: Why There’s Never Been A Better Time For A Woman To Become A Franchisee 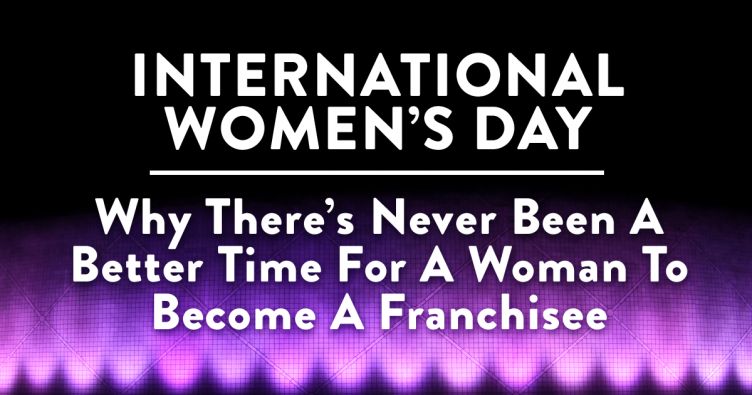 Franchising can prove an easier path to business ownership for women...

There’s no denying it, when you’re a woman in business it can feel as though you have to work twice as hard to get half as far. It can be harder to access funding, more difficult to enter male-dominated sectors and, whether you choose to have children or not, you can feel held back from promotions at child-bearing age. Which is why, with International Women’s Day (8th March) upon us, now is a great time to consider why franchising can be such a brilliant route for women to own their own business.

What is franchising?
If you’re new to this idea, franchising is a pretty simple concept to grasp. It’s simply a route for a company to expand by allowing entrepreneurs to buy a license to run another branch of their brand, provided they adhere to a very strict way to run it (to ensure the company’s success). It means a franchisee is able to run their own business without many of the headaches involved with a start-up (like having to build up a loyal customer base).

A female-friendly industry
But what is it about franchising that is such an attractive career opportunity for women? Whilst some sectors of business are still very tough for women to succeed in (just seven of last year’s FTSE 100 bosses were female), franchising is a different story. Just ask British Franchise Association chief executive Pip Wilkins, who says: “Whether they aspire to flexible hours to fit around family commitments or the potential for greater business growth to reap larger financial rewards, this flexibility is what makes franchising a fantastic route into business ownership for women in particular.”

And, she goes on to explain, as franchisors are looking for people with business acumen rather than necessarily the skills of that particular trade, it can be an easy route for women to break into normally male-dominated sectors, such as automotive industries, building maintenance, courier services and more.

A family-friendly career path
Women already run 30% of UK franchises, whereas only 17% of start-ups in 2017 have a female founder. And running a franchise can be particularly attractive to women of childbearing age, who either feel they’ve become less hirable around this age (whether they want children or not) or who lose out at work by taking time out to have a baby.

As Helen Venables, managing director of franchise House of Colour, says: “It’s estimated women in Britain lose nine per cent of their wage after their first child and 16 per cent after their second child. Suddenly, having a franchise, where you have your own business, a good wage and ultimately flexibility, with the unwavering support from a formal and established business model in your franchisor, seems extremely attractive.”

The right support
Sometimes in work, it can feel like you have to overcome a lot to reach your career goals. Whether it’s blazing a trail in a male-heavy industry or smashing through your company’s glass ceiling, it can feel twice as hard to get half as far. But this isn’t the case with franchising. In this exciting and forward-thinking industry, there aren’t just brilliant opportunities to own your own business, but an organisation willing you - as a woman - to become a franchisee. Encouraging Women into Franchising (or EWIF) runs regional meetings, annual awards and conferences dedicated to supporting women finding a path into franchising.

Now’s the time!
So, if you’d like to be your own boss, work hours that suit your lifestyle and find an easier route into a male-dominated area, franchising could be perfect for you. And what better way to celebrate International Women’s Day is there than taking the next step on your dream career path?