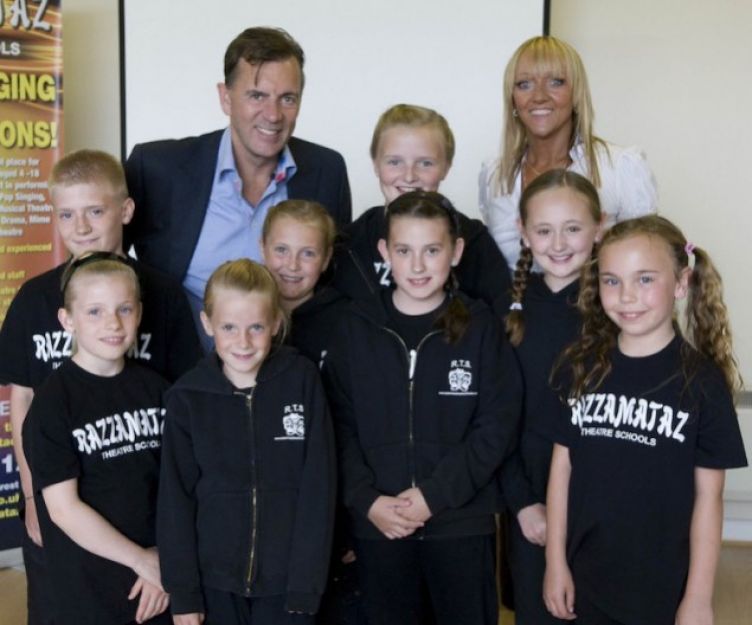 Razzamataz launched across the UK and abroad following £50,000 investment from Duncan Bannatyne

Razzamataz Theatre Schools is one of the most successful companies to have appeared on Dragons’ Den, according to online comparison website money.co.uk.

The BBC TV series sees budding entrepreneurs pitch their business ideas to five multimillionaires willing to invest their own cash.

As part of its Innovation Investment Index report, the experts at money.co.uk have compiled a list of seven of the most successful applicants from Dragons’ Den and revealed how their Dragon-backed businesses have become national and in some cases international success stories.

Razzamataz, which was established in 2004 and has 44 franchised outlets in the UK, ranks a very creditable 5th:

1. Levi Roots
Dragons: Peter Jones and Richard Farleigh
Investment amount: £50,000 for 40 per cent equity in the company
Back in 2007, Reggae singer and chef Levi Roots pitched his spicy Reggae Reggae Sauce to the Dragons’ and successfully managed to secure £50,000 to manufacture his product.

In return, Levi was offering 20 per cent of the equity in his business.

The sauce is a secret recipe from Levi’s grandmother and must be hot stuff because despite being told there’s “no future for this business” by Duncan Bannatyne, Peter Jones and Richard Farleigh invested £50,000 for 40 per cent equity in the company.

Reggae Reggae sauces are now stocked in all major UK supermarkets, taking Roots’ worth to an estimated £30 million, according to the Sunday Times Rich List.

Peter Jones remains a shareholder and advocate for the brand, claiming: “It’s one of my most successful investments from the show.”

2. Magic Whiteboard
Dragons: Deborah Meaden and Theo Paphitis
Investment amount: £100,000 investment for a 40 per cent share of the company
Set up by husband and wife team Neil and Laura Westwood in 2006, Magic Whiteboard is basically a roll of A1 whiteboard sheets that will stick on anything thanks to static. It’s now stocked in all major office supply stores with a global customer base.

The product is said to be Deborah and Theo’s most successful investment, with the portable whiteboard achieving impressive growth since appearing on the show.

3. Skinny Tan
Dragons: Kelly Hoppen and Piers Linney
Investment amount: £60,000 for a 10 per cent stake in the company
Self-tan brand Skinny Tan went from start-up to global success after founders Louise Ferguson and Kate Cotton pitched to the Dragons in 2013 - and it didn’t take long before it became one of the fastest selling tanning products in the UK.

Launched in 2012, Skinny Tan boasted profits of £600,000 in its first year. Not surprisingly, all five Dragons showed an interest in investing in the company, with Kelly and Piers sealing the deal with an offer of £60,000 for a 10 per cent stake in the company.

The company was sold for an undisclosed sum in June 2015. Both co-founders and Kelly and Piers remain shareholders.

In April 2020, Kate and Louise revealed that they plan to launch the brand in Spain and South Africa next.

4. Wonderbly
Dragon: Piers Linney
Investment amount: £100,000 for a four per cent stake in the company
Founded by dads Asi Sharabi, David Cadji-Newby, Tal Oron and Pedro Serapicos in 2012, the creative fiction books for kids were pitched to the Dragons in 2014.

Originally named Lost My Name, Wonderbly creates personalised children’s books that feature its readers in the stories. The idea impressed Piers Linney, who invested the full £100,000 requested for a four per cent stake.

The company has gone on to sell more than two million books across the globe, with Piers describing it as “The most successful business to have ever passed through the den’s walls” in 2015.

5. Razzamataz Theatre Schools
Dragon: Duncan Bannatyne
Investment amount: £50,000
Denise Hutton-Gosney pitched her dance schools to the Dragons in 2007 and secured an investment of £50,000 from Duncan Bannatyne.

With the Dragon’s support, the company was able to launch across the UK and abroad.

She says: “Dragons’ Den was a huge springboard for Razzamataz and almost overnight gave us more brand exposure than we had ever had.

“Even now, all these years on, new franchisees often tell me they remember watching the show, even though some of them were only children at the time.”

Denise’s pitch featured four of her students, who demonstrated to the Dragons what it means for children to be part of the theatre school.

“Razzamataz is all about teaching performing arts to create confident young people and I realised it was better to show the Dragons what this actually looked like rather than explaining it,” Denise says.

“The children were so enthusiastic and full of joy about performing arts that it was hard not to get swept up in their energy.”

After the children left the Den, Denise was grilled by the Dragons about why the school was a good business proposition.

And following a series of probing questions, Duncan offered the full investment.

“The memories of that day stay with me forever because it was a truly unique experience,” Denise adds.

“It was absolutely terrifying, especially being grilled on the numbers, but the one thing I knew for certain was that Razzamataz was so well loved by our customers and the few people that had taken out a franchise with me.

“That gave me all the confidence I needed to show the Dragons what a good investment opportunity we could offer them.”

6. Chocbox
Dragons: Duncan Bannatyne and James Caan
Investment amount: £150,000 in return for a 36 per cent stake in the business
After Peter Moule invented a plastic cable device as a way to store electrical wires safely, he pitched his idea to the Dragons’ in 2007.

Following a successful presentation, the entrepreneur secured the support of Duncan Bannatyne and James Caan, who invested £150,000 in return for a 36 per cent stake in his business.

Since first appearing on the show, Peter’s gadget has netted £25 million in global sales.

In an interview with North East Exclusive magazine in 2013, Bannatyne described Chocbox as one of his best investments from the show.

7. Mainstage Festivals
Dragon: Piers Linney
Investment amount: £100,000 in return for 15 per cent of the company
Founded in 2011 by Rob Tominey and Aden Levin, Mainstage Festivals offered “once in a lifetime” low-cost clubbing holidays for the 18-24 market.

When Rob and Aden pitched the Dragons, the business already had revenues of £1.6 million.

The entrepreneurs received multiple bids and accepted Piers Linney’s offer for £100,000 in return for 15 per cent of their company.

Start your own Glasstech franchise

Send a free enquiry to Glasstech for further information!