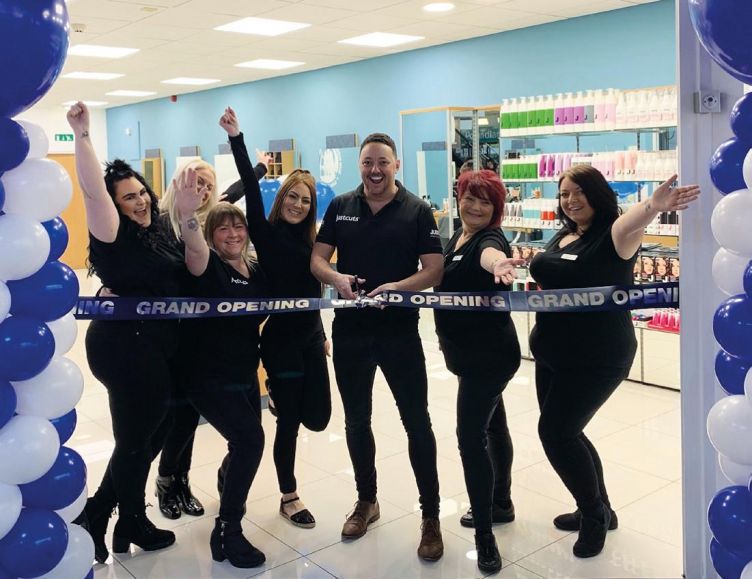 Just Cuts is going from strength to strength in the UK, despite the obvious economic challenges

Two years on and eight salons later, David Mathie, UK general manager, and his team are on a mission to replicate the brand’s prominent standing in Australia and New Zealand.

“In my native Australia, Just Cuts is quite literally a household name,” David explains. “We’re the largest hairdressing brand in the southern hemisphere and perform 100,000 Style Cuts every week.

“We celebrated our 30th year in franchising in July, having launched the first franchisee owned salon in the suburb of Engadine, Sydney in July 1990. We’ve launched new salons in Australia, New Zealand and the UK this year, so despite the obvious economic challenges our brand is going from strength to strength in the face of adversity. And we have so much more in store for the remainder of the year.”

Just Cuts kicked off 2020 with a new, fast paced strategy for nationwide growth, whereby key, sought after sites are preselected and invested in by Just Cuts corporate.

Once these locations have been established, Just Cuts invests in the site and brand it up with its unique Aussie style, usually within a matter of weeks. Once operational, these salons are available for new franchise owners to invest in.

The pilot location to launch under the new scheme opened in Crossgates shopping centre in a bustling suburb of Leeds in January 2020 - almost two years to the day after the opening of the first salon in Essex.

Less than six months later, Just Cuts Crossgates was acquired by one of Just Cuts’ existing franchise owners, completing the sequence the company had devised to rapidly increase its market share.

By March the second corporate investment location opened, in the Liberty Shopping Centre in Romford. Three months later, the team leader Just Cuts had recruited to manage operations of the salon invested in the franchise, becoming the fourth UK franchise owner.

“In line with the structure of our network in Australia and New Zealand, where over half of our franchise owners have multiple salons, our UK franchise owners are following in their footsteps,” David says.

“Every single one of our UK franchise owners already own multiple locations or are planning on significant expansion before the year is out. The demand for our value driven services and affordable haircare range, JUSTICE Professional, are real drivers for our clients.

“Even when taking into account the enforced three-month closure period due to the COVID-19 pandemic, all of our salons are thriving. So much so that there were record downloads of the Just Cuts app when salons were allowed to open again on July 4.”

Recent launches months in the making

The brand’s two most recent launches, in Sunderland and Middlesbrough, were months in the making. Due to the obvious and unavoidable limitations, the UK franchise development team had a significant amount of time to locate and fit out the perfect sites for salons number seven and eight.

And although the appeal of Just Cuts’ ‘no appointment, just walk in’ service would translate well on any UK high street, market research established the north as the most significant region for expansion.

“It just makes financial sense for us to replicate our initial success in the south and market our services to a new demographic,” David says. “Just Cuts’ salons perform well in busy shopping centres and on key high street locations because, thanks to the convenience of our no booking system, clients can pop in during their lunch hour or once the kids are at school.

“For the weeks leading up until the launch, we invested significantly in building momentum in the north east, initialising marketing and PR campaigns that would raise awareness of a brand new hair salon coming to the area all the way from Down Under.

“When we finally opened the salon doors at 9am on what is now being referred to as ‘Super Saturday’, the people of Middlesbrough and Sunderland certainly didn’t disappoint. At this point, people had waited over three months for a haircut.

“We were also very upfront and communicative in terms of sharing the new social distancing procedures we’d established to ensure our clients’ health and safety. This put clients’ minds at ease and encouraged them to try us on the first day we were open, resulting in our busiest day in 2020 to date.”

One month on, the Middlesbrough and Sunderland salons are bustling hubs of the community. While they are currently operated by a fully trained team leader and team of stylists, the brand is on the hunt for passionate and hungry franchise owners to take the reins.

“With all eight of our UK salons back up and running, we can look forward to the future of our brand and the goals we’ve set for the remainder of this year,” David says.

“It really is going to be a record year in terms of our ongoing global expansion. From a business development perspective, plans are well underway for the launch of salon number nine.”

Just Cuts’ next salon investment is set to move forward in the industrial town of Blackburn, Lancashire. These turnkey investment opportunities are perfect for those looking to make financial gain from the UK’s recession proof £6.1 billion hair and beauty industry.

And the best part? You don’t need to have hairdressing experience to own a Just Cuts franchise. As an owner, you don’t style or cut - you manage a team of qualified stylists, while planning for the future of your franchise.