“We want to bring fitness and health to more communities” 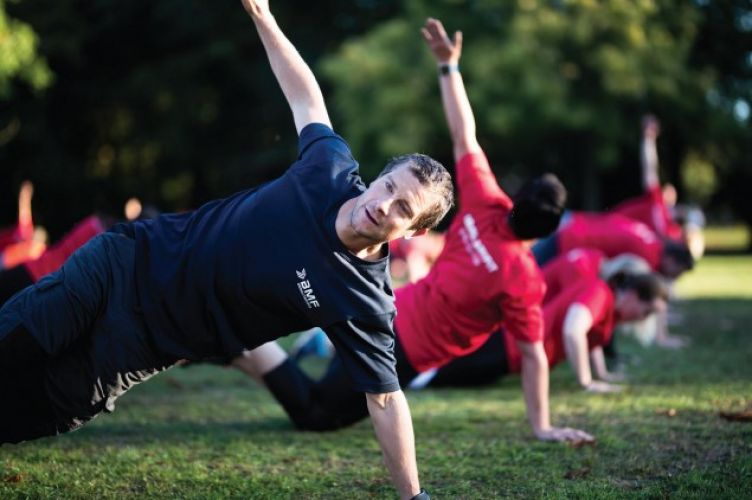 What inspired you to get involved in be military fit?

Both Bear Grylls and I have a long connection with Be Military Fit (BMF). I was an instructor and Bear trained with BMF during his time in the military.

We share so many values and became excited about the prospect of owning a business with great heritage and exponential growth potential. Getting people outdoors, active and healthy also provided us with a purpose we felt very positive about.

How did bear grylls get involved?

Bear had trained with BMF to prepare himself for SAS selection and we have been friends for 25 years - we first met while we were serving in the army.

I’m also a former army officer and the opportunity to buy the company together fitted with Bear’s aspiration to get more communities active in the great outdoors.

Bear’s role in the business is to promote the efforts of great franchisees, instructors and veterans who are changing lives on a daily basis.

He believes BMF has a special heritage with military personnel and many veterans. Bear says the mission to build a BMF franchise network that connects local entrepreneurs and veterans with fitness and communities is one he’s proud to champion.

Tell us about your partnership with the british armed forces

The establishment of BMF Human Performance, a sister business of BMF Franchising UK, specialises in the delivery of performance programmes to a range of public, commercial and sporting organisations.

One of the largest programmes supports the physical and psychological preparation of 30,000 army recruits candidates per annum.

The army programme’s primary means of delivery is through a bespoke digital system, but it is a hybrid model, with training teams being deployed throughout the UK to educate and train candidates to the required standard.

Many of these teams are provided by our top performing franchisees, thereby acting as a means to incentivise performance across the network and raising franchisee profile.

BMF was initially invited to run a six-month pilot in 2020, but the project’s overwhelming success recently led to a three-year contract.

BMF Human Performance is already in discussion with the Royal Marines to develop a similar proposal and we hope to extend the value provided to the army across all three services.

Give us the lowdown on your training programme?

We’re a fitness movement for anyone and everyone.

We have a ‘train anywhere’ philosophy and ethos and train outdoors in parks, on hills, at the beach, archways, streets, sports clubs, business parks and indoor and urban locations.

We’re mobile, bringing fitness to the workplace, the community and to individuals at any location and at any time that suits the customer.

Our proprietary, military-based workouts cater for people of all ages, abilities and backgrounds

When and why did you franchise the business?

The short answer is that BMF was failing as a centrally owned and operated business when we bought it out of administration.

Its cost base, with regional managers and salaried employees, was failing to compete with the rapidly expanding affordable fitness offers.

We were passionate about the business, its history, members and commitment to veterans.

We saw immediately that developing the UK’s most affordable fitness franchise with very low capital investment, rapid speed of entry to market, a low cost operating model endorsed by Bear and designed to train anyone anywhere could take BMF into a new environment where it could reinvent itself and grow exponentially.

Unsurprisingly, the first wave of franchisees in 2021 were the most enterprising employees, with a passion for BMF coming from the owned business. Most recently, as we expected, entrepreneurs from all backgrounds - as diverse as banking and retail - have become BMF franchisees.

What type of franchisees are you looking to recruit?

BMF is a sustainable, ethical business with a commitment to empower communities to change lives.

We’re seeking firstly to attract investors with a desire to generate wealth through a business that can make a contribution and difference to the health and wellbeing of people from all ages and backgrounds.

If the pandemic has taught us anything, it’s that reducing weight and improving general fitness levels is essential for well-being and resistance to infection.

Entrepreneurs with the ambition to develop multiple sites across prime territories are of primary interest. They can reach more people, more rapidly and grow profitably to the highest levels through economies of scale.

Our franchisee community, however, also encompasses people from all walks of life. These include, for example, an investment banker, a mining entrepreneur, a policewoman, fitness professionals and personal trainers, as well as entrepreneurs from all backgrounds and people just wishing to change their lifestyle.

The low capital cost of entry and low operating cost means that with our expert training programmes and franchise systems anyone with modest capital can start by opening a single franchise territory.

The value of a franchise is that it provides franchisees with systems, support and training that enables them to develop a business without having previous business or product expertise.

A comprehensive training programme backed up by technology, sales and operating systems means any individual with an appetite for hard work, a willingness to learn and a passion for the business can become a BMF franchisee.

How much does it cost to become a franchisee?

The lowest point of entry provides a franchisee with access to the BMF brand, operating systems and intellectual property, with exclusivity in territory for 10 years.

The cost of that franchise is a modest £20,000 and a franchisee would expect to have approximately £20,000 of working capital to support purchases such as equipment, a BMF van, etc.

This we believe provides the lowest point of entry to a fitness franchise in the UK. It compares to the cost of £200,000 to £400,000 for most traditional gym franchise entry.

The larger investor would wish to develop venues with mobile units and possibly indoor urban programming, which provides greater versatility and protection across the winter months.

These investors would expect to make an investment of anywhere between £60,000 to £150,000 to develop a multifranchise model with higher levels of return on their investment.

What does a franchisee get for their money?

They get access to an established brand promoted by Bear Grylls, which systematically features positively in the national media and press.

Franchisees meet the operations director fortnightly to articulate their needs and prioritise the support they need to deliver a great business. The franchise also becomes part of a network that shares best practice.

Essentially, the franchisee becomes part of the BMF family, committed to helping each other succeed.

How many franchisees do you have in the UK?

We have 100 sites open across the UK. We believe we’re the fastest growing franchise in the UK, having opened 20 new venues since January despite COVID-19 restrictions.

The venues are owned and operated by 35 individual franchisees and 10 new franchisees are set to expand their territory in the coming months.

Given that the franchise business was launched in January 2020 in the most difficult trading period in the UK, we consider demand for the franchise and the fact over 100 venues are now open to be truly exceptional.

How many would you like to have established by the end of 2022?

We plan to open an average of two-three new venues every month until December 2022.

In 2023, we expect to double the number of BMF venues across the UK, while concurrently driving international expansion.

Are there any particular areas of the country you’re looking to expand into?

We’re very well established in London and the south east.

Although we have venues all over the UK, including Scotland, Wales and the north and west of England, we want to bring fitness and health to more communities.

We particularly want to target communities where there are limited fitness venues and higher levels of deprivation and health concerns.

We plan to be more proactive in promoting franchise opportunities in areas outside London and the south east in the year ahead. We’re also looking to expand abroad and have a franchise in California opening very soon, as well as possible sites across Europe and the Middle East.