Working with your partner: secrets of success revealed 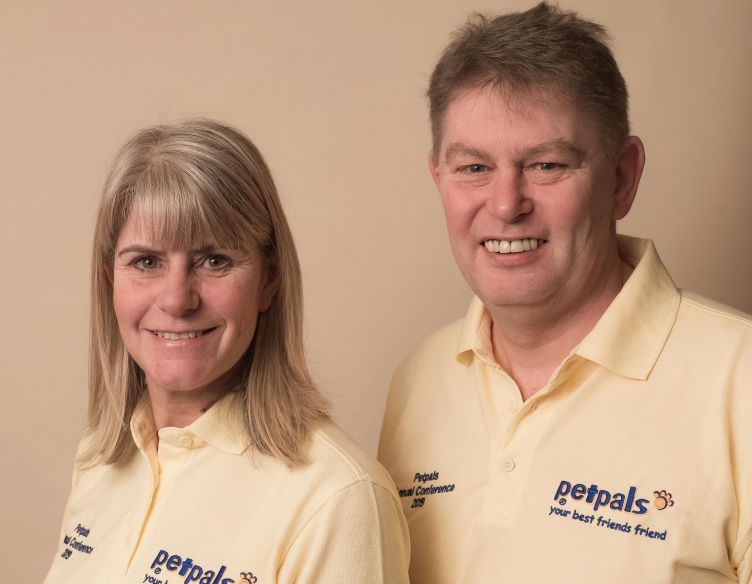 David and Sally Ann Gray own one of the largest Petpals franchises in the UK. Sally Ann left her job in education in 2006 to buy her first territory, Petpals Darlington & Yarm, and was followed a few years later by former police officer husband David, who left his job as head of security for a high street chain when he bought the territory adjacent to hers, Petpals Tees Valley.

Since 2012, they have run their businesses together. Today they employ over 20 members of staff and service approximately 3,000 clients a year. David and Sally Ann are just about to buy their fourth territory, Petpals Stockton.

Petpals is the biggest multi-service pet care franchise in the UK. Its franchisees walk and board dogs, plus visit puppies and elderly dogs. They also visit cats and board or visit all small pets.

David and Sally Ann know a thing or two about working successfully together. We spoke to them to find out their top tips for a successful and profitable working relationship.

David says: “The most important thing, above anything else, is that you communicate openly with your partner about the business.

“If you can’t discuss all aspects of the business together, resentment can build until the issue, whatever it is, becomes too big to deal with, ultimately causing the partnership to fail.

“Alongside talking about things on a day-to-day basis, we also take ourselves off to the beach for a long walk if we have something big to tackle. It has become our go-to problem solving, walking and talking release and we can highly recommend it.

“Equally, we try not to talk about work all the time, especially when the children were younger. Many was the time we’d be out for a meal and they’d ask us to stop talking about Petpals.

“On the plus side, they had a house full of wonderful pets to play with for many years and our daughter Natalie now works in the business, so we don’t think they did too badly.”

Divide up the roles and play to your strengths

Sally Ann advises: “David is very good on the admin side of our business. He sorts out the bookkeeping, vans, trackers and office administration, whereas I’m happier in a customer-facing role.

“I deal with our staff on a daily basis, the customers and of course the animals. Our staff know that ultimately they can come to either of us with a problem, but equally, they know where our strengths lie.

“Employing as many staff as we do, HR is important and a role we divide between us. David looks after contracts and standards, whereas I deal with training and pastoral care.

“I always said I aimed to be the employer I wanted to be employed by, so we work hard to make sure our staff are happy. It seems to be working as three more members of our staff recently celebrated their 10-year anniversaries with us, making seven in total, something we’re really proud of.

“I would never ask a member of staff to do something I wouldn’t be willing to do myself and they know that. If you put a lot of energy into recruiting staff, you want to put the same amount into retaining them too.”

Just four months after buying her first territory, Sally Ann employed her first dog walker, adding an additional one or two members of staff just about every year.

She says: “When you’re running a franchise as a husband and wife team, it’s easy for it to become all-consuming. With staff on board, it gives you the freedom to still have a semblance of normal life, which was important to me.

“My children were 11 and 13 when I bought my business, so they still needed me to drop them off at the stables, take them to clubs, etc. While David was cooking and I was being taxi mum, having a reliable member of staff made it easier to manage.”

David recalls: “We used to run the business entirely from home.

“For 10 years we had up to 14 walkers arriving at our home every morning to collect keys before going out on the walks. Inevitably, they would end up having a cup of tea in the kitchen, until the point that our street couldn’t cope with any more vehicles and our kitchen ran out of chairs.

“Getting the office was one of the best things we’ve done and possibly something we should have done a lot sooner. It allows us to truly separate our work and home lives. If it isn’t done by 6.00 pm, it can wait until the morning.

“Previously, one or the other of us would have been on our laptop in the sitting room every evening working when we should have been having family time.

“You do need space to run a business and although the end of the dining room table will do for a while if you don’t want it to swallow up your family time, get an office or at least use a spare room if you have one.”

Sally Ann says: “When you work together as a couple, you have a unique insight into your partner’s day. In many jobs, maybe for security reasons the husband or wife can’t come home and offload about their day. We don’t have that problem.

“If one of us has had a tough day, the other one is there to support, which is so nice. We never feel alone in the business, as we are very much in it together.

“We also get to know where our partner’s strengths lie, which gives our personal relationship even greater depth. David knows I hate change, be it becoming VAT registered or introducing new software, and I know he needs reining in when he’s had a new idea that maybe he hasn’t thought through from all angles.

“We’re like two pieces of a jigsaw and our skills complement each other well. Not perfectly, as no partnership is perfect, but as long as we can talk openly about things, which we do, we’ll be fine.”

Start your own Petpals franchise

Send a free enquiry to Petpals for further information!