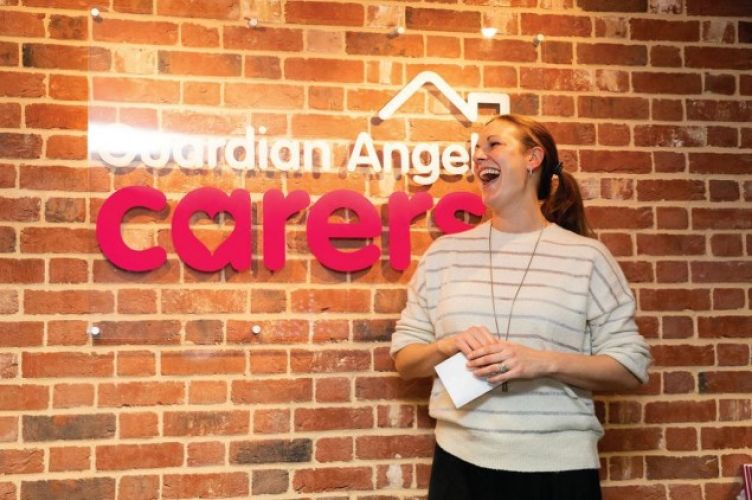 Although Christina Handasyde Dick, founder and CEO of Guardian Angel Carers, took a detour to represent Britain in two Olympic games, she was always destined to be an entrepreneur

Taking care of the elderly and sailing are Christina Handasyde Dick’s (formerly Bassadone) two big passions. And when the time came to choose between one or the other, she decided to pursue both.

Growing up on the South Coast as part of a sailing-obsessed family, it was inevitable Christina would catch the sailing bug.

For several years she proved her sailing chops, even winning the 420 Ladies World Championships in 2000. But Christina had her sights set on something bigger – the Olympics.

Now it may seem unusual for a competitive sailor to then end up founding a home care business, but Christina’s passion for looking after the elderly stemmed from her childhood.

“My parents divorced when I was 12 and my mother and I lived with Granny Gardiner in her house by the sea while my father moved in with his mother. So I grew up living with both my grandparents from my early teens,” explains Christina. It was this period of her life that her fondness for older people began. “I think that gave me heart and compassion for seeing them as they got older and needed more support,” she continues.

“My mother’s mother went from having companionship and light touch care through to having lived-in and life care until she eventually passed away in her own home.”

Although heart-breaking, Christina felt privileged to have been part of that journey as a teenager. Her compassion for the elderly was so strong that when the time came to volunteer at school, she chose care over cadets. “The choice was easy,” she says. “I chose to volunteer at the local elderly home. I used to visit a lovely lady named Doris and we would play Scrabble, do her weekly shop, have cups of tea and go through her photo album.”

Christina was on track to pursue her degree at university when one day she had an epiphany.

“It was the summer before I started at Southampton University. I had won the 420 Ladies World Championships and it was also the Sydney Olympic Games. I was sitting on the sofa watching the British sailors win their gold and silver medals and one of the silver medalists had also coached me in youth sailing.

“I felt inspired by everything that they had achieved and just decided there and then that it was what I wanted,” explains Christina.

Fearing her father would “kill” her if she dropped out, Christina juggled university and training for the Olympics for two years.

“It was very close between me and a couple of other teams and it felt like a make or break moment – I had to make a decision if I was all in or not. So I postponed my final year of uni,” she says. “I kept my student loan and took out a credit card to pay for a private coach, Tom Saunt, to give us a jump ahead of our British competitors.” And that made all the difference.

Despite being the underdogs, Christina and her partner went on to qualify and compete in the 2004 Athens Olympic Games. Apart from her grit and determination, this out-of-the-box thinking led Christina to later establish Guardian Angel Carers.

After taking another year off to compete at the Olympics, Christina went back to university “to keep her father happy” and got her degree in 2005, with her focus on entrepreneurship, small business management and new business development.

Still only 22, and not having won a medal in her first Olympics, Christina decided to give it another shot at the Beijing Olympic Games. However, a medal was not on the cards for her, having placed sixth overall.

By anyone’s standards, representing your country twice at the Olympics is an outstanding achievement, not to mention an amazing life experience. However, what was to come would “break” her.

“Shortly after that Olympics, three weeks after we returned from Beijing, my father passed away,” says Christina.

This was the beginning of a painful personal year: her father’s death, the split from her sailing partner, coupled with breaking up with her boyfriend of many years while also having to deal with the comedown from the Olympics.

“If I’m really honest, it broke me,” reflects Christina. “Whether you win or lose at the Olympics, recovery is not quick. You’ve been working towards this big goal for so long and it’s all that you focus on. It’s kind of your everything, your purpose – you. It was a massive comedown.”

Makings of a leader

At this moment when many would give up, Christina decided to work through it by moving to New Zealand for six months. “I went to life leadership college, which essentially was a bible school, and I came back calmer as I had made the decision not to continue Olympic sailing,” she says.

This was also the time of the 2008-09 financial crisis and employment was not easy to find. She says: “My confidence was not hugely strong after everything I had been through over the previous year. But I’d been talking to a friend who helped me to see that what I loved was helping people. I needed to find a way to do that and combine it with my love for ‘organising’ and problem-solving.”

So, she established Task Angels in 2010, the sister company to Guardian Angel Carers. “We were mostly doing domestic cleaning and looking after people’s second homes,” explains Christina.

The lifestyle home management company grew quickly from her mother’s kitchen table into a team of three, she laughs: “Mum told me it was time to get an office”. Christina then bought a modest houseboat on the nearby canal, which flourished into a “proper office” and a team of 25 within two years.

“We also ended up doing quite a lot of elderly homes – cooking and cleaning. I recognised that there was a real opportunity in this area for a good professional and compassionate local home care company. But it needed to be regulated by the Care Quality Commission (CQC) so we started a separate business – Guardian Angel Carers.

“I had a colleague at the time who had worked in home care and she gave me the confidence that we could do this and we haven’t looked back since,” says Christina triumphantly.

No resting on your laurels

When Guardian Angel Carers was launched in 2012, there was already a long client waiting list. “We had several of our Task Angel clients who we were providing daily meals, companionship and shopping, but a couple of those clients were getting to the stage where they needed more personal care.

“Their families were so keen to continue with us that they were happy to wait until we achieved our CQC licence. They had to wait months as we went through the application process,” explains Christina.

It was then that she knew she was on to a winning concept. Christina and her HQ team have continued to use her out-of-the-box thinking to gain that edge in an already crowded home care market. Her 200-plus head office team and franchise family are growing strong, with franchisees ranging from nurses to former RAF pilots.

“I am not intimidated by the crowded market. You don’t walk up to an Olympic race as the only boat at the start line and it is exactly the same in care. You win the race by constantly moving forward and looking for marginal gains,” she says.

Innovation and using technology in care is what has helped Guardian Angel Carers stand out, especially since the pandemic. “We have always been an early adopter with the use of technology to improve business efficiency. For instance, it has been several years since our carers have had an app on their phones to clock in and out,” says Christina.

“There was no change in the ways of working for our care team when the pandemic hit. We already had a system of working in bubbles, which we then called ‘cells’. I am happy to say that we have had no deaths from COVID of clients or colleagues.”

Christina is laser-focused on growing the brand through franchising across England. She explains: “Given the complexities of care with regulatory requirements, I am not pushing an international focus for the next few years.

“I really want to make sure we do an ‘outstanding’ job in delivering an excellent support service to our franchisees within England before we push the limits anywhere else.”

THE AUTHOR
Amanda Peters is a staff writer for What Franchise and Global Franchise.