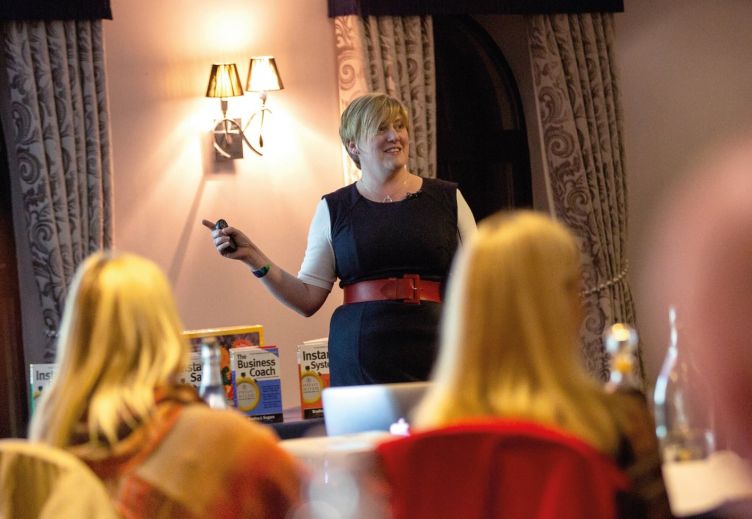 As a former fast-track graduate on the Mars Incorporated trainee scheme, Jenni Morgan was introduced to coaching as a line management style, which left a lasting and positive impression on this young professional. In the following 15 years, her career with Mars Inc. took her into every business function before finally finding her calling.

Jenni explains: “I’d always felt a pull to support young people who were struggling in school. I strongly believe that a good education can improve your chances in life, but I soon realised I wasn’t the right fit for a school environment and my skills were going to be better used elsewhere.

“I took the opportunity to think again about my career. I’d studied chemical engineering at university, so I decided to move into manufacturing, which soon led to me winning one of less than 20 places on Mars Inc.’s graduate scheme from a pool of thousands of applicants.”

Jenni finally grasped what she wanted. She identified her strengths lay in coaching, marketing and her wide understanding of business operations in large corporates. After the scheme, she was settled in London with her husband, Henry, and was contemplating her next career move. She could thank her lucky stars, as an old colleague from Mars Inc. reached out to her with an offer that just made sense.

“He’d been consulting for a company that needed someone to implement the marketing elements that had been identified within his project,” Jenni says. “I started my own consultancy, so they could pay me for the work. This was the first time I had worked with smaller companies and I had a major breakthrough - coaching was my opportunity to make a difference.”

In Spring 2018, Jenni wrote out her wish list for her future career. What did she enjoy? What were her skills and values? She knew success was linked to education, so working somewhere that valued ongoing professional development would be important this time around.

“I thought I could find a job where I could help companies grow by coaching them,” Jenni says. “After extensive research, it turned out there weren’t any jobs that did that - I’d have to create my own.

“In the past, I’d registered with a franchise search website and had been ignoring their daily emails advertising different franchise opportunities. I’d just finished formulating my wish list when I decided to open one of these franchise opportunity emails - it was ActionCOACH. It seemed to answer my coaching wish, but I didn’t know enough about them to match anything else. I shortlisted similar franchises and registered for their discovery days.”

After all of her meetings, Jenni talked things over with Henry, but her mind was made up - ActionCOACH was the one. She would be the first new franchise partner to sign up to their exclusive territory Firm Builder licence. In September 2018, Jenni was ready for her initial training week at ActionCOACH University.

“It was a whirlwind,” she says. “Each session was led by experts from the UK team, including long-term franchise partner, Andrew Kureishy, giving real-life examples of client coaching techniques, and sales guru, Jon Asquith, from their exclusive client generation centre.

“They put all the practical nuts and bolts in place and I was ready to launch my new business. All the planets had aligned to bring me to this point - the start of something big. In October 2018, ActionCOACH Wakefield was going to take everything I had made of myself so far and up the game so I could be the best I could possibly be.

“I’d spent four weeks rounding prospects up using networking, ‘bold calling’ and direct mail campaigns and I had 30 people sat in my first 6-steps seminar. My coach’s coach, James Vincent, presented part of the seminar with me. It was a great confidence boost and, at the end of the seminar, I booked 12 follow-up appointments, which resulted in one group coaching client and a one-to-one coaching client.”

Jenni decided to stretch her first 12-month goals, planning to reach a six-figure client income through a mixture of one-to-one and group coaching clients. She found a combination of networking, seminars, telemarketing and direct mail campaigns brought in a good level of enquiries and led to a good conversion rate into paying clients.

“I employ the equivalent of one full-timer, with three people split between marketing and telemarketing activities,” Jenni says. “I also receive qualified leads from ActionCOACH’s client generation centre. This gives me a pipeline of prospects, which puts the business in a good position to finish our first year and move in to the next. I plan to reinvest any profit back into the business to begin the expansion of the firm during the first quarter of 2020.”

Jenni and Henry moved to Yorkshire to improve their work-life balance, spending more time with friends and family. But starting a new business, even with the help of a dedicated franchise support team, takes a lot of time.

“I’m the sort of person who will put in a lot of hours to make something successful and my new business has been no exception,” Jenni says. “If you speak to a few ActionCOACH franchise partners, you’ll find they all grow their businesses at different rates due to personal goals and motivators, so you don’t have to be exactly like me.

“It’s only recently that I’ve started to keep my weekends entirely work free. I’ve began my mission to get fit - keeping space in my diary for aqua aerobics and going to the gym several times a week.

“What’s really important to me is that I’ve found a career that ticks everything on my wish list and more. ActionCOACH’s 14 Points of Culture overlap with the values I wrote down back in Spring 2018. The culture statements aren’t just a list of phrases, you see them walking and talking every time you meet someone in the ActionCOACH family.”