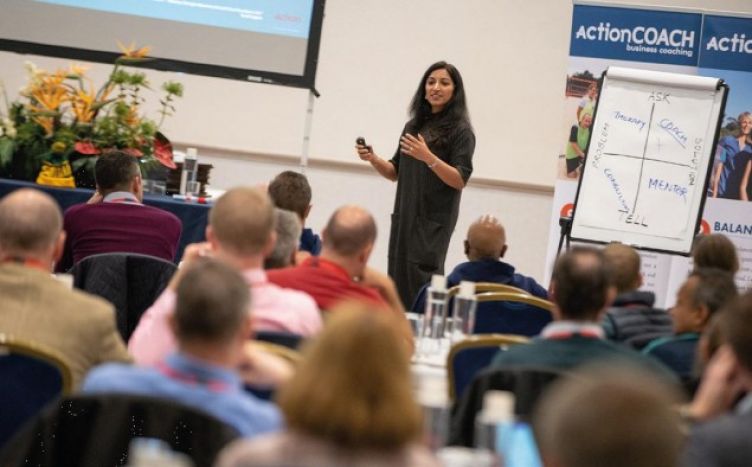 With over 32,000 cleaning businesses in the UK all vying for a slice of the market, this forward-thinking business owner decided to take action and has now reached over double the industry standard profit margin and a 650 per cent increase in turnover.

As a natural entrepreneur, he wanted to grow the business quickly and become the biggest and best in the Greater London area. For the first nine months, growth was impressive - but, not one to rest on his laurels, Luke simply wanted more.

He explains: “The first client I secured was a hotel, which gave us a contract of over 120 hours a week. With that, I gave five mothers and a father employment and that was just the beginning.

“As things started to build momentum and an increasing number of clients came on board, I realised I required some refinement to my business operations. I’d established my foundations and I had big dreams - I just needed someone to point me in the right direction.

“I went to an ActionCOACH seminar with Mitali Chopra, where she opened up my eyes to business coaching.

“I think a lot of people would be apprehensive to have someone come into their business and make suggestions for change, but I knew this was the way for me to take things to the next level.

“I arranged a one-to-one meeting with Mitali to discuss the work that we would do together.”

Opening up my eyes

“Mitali understood everything I wanted to achieve from our sessions - I required a more robust structure, stability, a sense of order and to be held accountable for my actions.

“She spoke clearly and concisely, which I appreciated. The first things we focused on were the goals of the business - where did I envisage it would be in five and 10 years’ time? “I put these all in a plan and laid them out clearly, so I could see exactly what I was aiming for.

“We also worked on setting out significant targets and key performance indicators.

“I’d always had it in my head where I wanted to be, but having things written down and documented so I could refer back to them was extremely useful, as well as Mitali holding me to account to reach my targets.

“I could see where some months I might have needed to do an extra push with increasing our cleaning hours or recruiting people to the team. I’m results driven and having this process in place helped me stay on track.”

With Mitali’s help, Integrity Cleaning started to generate a lot more interest. And, with that, Luke felt confident he was achieving his goals.

“Not only did I have more selfconfidence, but the team started to feel it too,” Luke says. “They began taking responsibility for their actions and delivering a much better service.

“It just goes to show how getting the foundations right will impact the day-to-day operations of the business. I was filtering down all the wisdom and knowledge Mitali was sharing with me to everyone else.

“We pride ourselves on the great work ethic and the environment we operate in. As a result, we’ve all drawn closer together and the way we communicate has only got better.

“Mitali calls me her ‘champion’, so I call her the ‘champion of champions’. She’s not only helped me to achieve my goals, but has also allowed me to focus on the future and strive for further growth.

“Mitali isn’t just a coach to me any more, she’s become my friend - she celebrates my little victories and, in any business, that’s so important.”

“Almost immediately after beginning my coaching sessions with Mitali, Integrity Cleaning secured a six-figure contract with the largest construction project in London.

Alongside that, we had multiple housing developments, a London university, House of Fraser on Oxford Street and The Shard signing up as clients. New business was coming in faster than ever before.

“To manage the influx of new clients, I’ve supported 39 mothers and five fathers back into work.

“The results have been astounding, as we’ve seen a 650 per cent turnover increase in 12 months and a 114 per cent increase in gross profit. This places our profit margin at around 43 per cent, which is over double the cleaning industry standard of 20 per cent.

“Perhaps the greatest thing that’s come out of my coaching is being crowned ‘UK Entrepreneur of the Year’ in 2019.

“I had always dreamt of entering the Business Excellence Awards, but it was Mitali who gave me the confidence to apply.

“I’ve got Parkinson’s but I don’t suffer with it, I excel with it. In fact, I use it as my inspiration every single day and it’s actually one of the main things that drives me forward.

“Off the back of the award, my confidence has sky rocketed and I’ve now become a passionate public speaker.

“In my first year, I booked 18 international gigs where I would share my story and offer advice regarding business ownership.

“I have a lot to thank Mitali for in that sense, as I wouldn’t have been able to do this without her. She’s certainly helped open a lot of doors for both myself and the business and, for that, I’m grateful.”

Mitali explains that Luke is a coach’s delight and adds: “He’s really started to take ownership of his business and the pay-off is very impressive. It’s been an absolute privilege helping him to realise his potential.”

If you want to change lives like Mitali and you’re the kind of person who:

A. Loves learning and helping people;
B. Has enjoyed success in your career, business or a sport; and
C. Is willing to invest if you see substantial returns can be made…

Then find out more by watching the overview video at actioncoach.co.uk/overview.