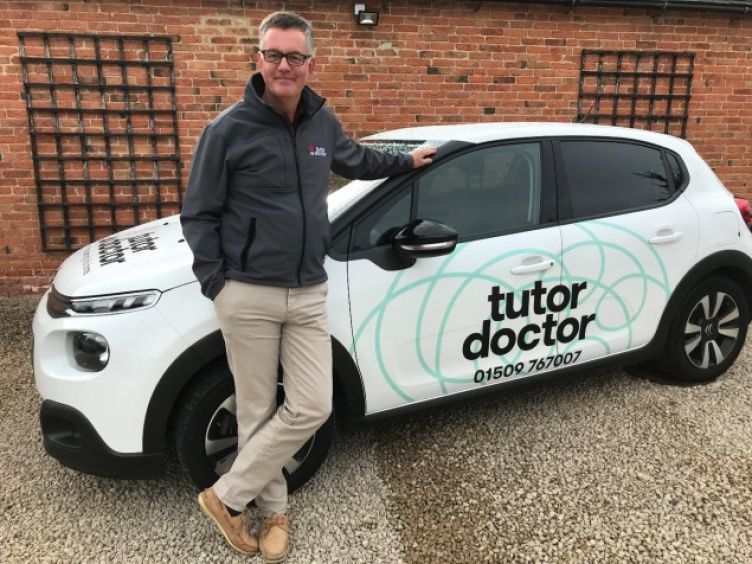 The drive for autonomy, combined with a shift in the tech-sales industry spurred Stephen Woolley on to look for something new

Stephen Woolley is something of a sales veteran – having enjoyed a very successful career spanning three decades. However, he eventually began to tire of the role and the nagging desire to be his own boss became increasingly insistent. This drive for autonomy, combined with a shift in the tech-sales industry spurred Stephen on to look for something new. He discovered he could utilise his past experience, fulfil his dream and make a difference at the same time. He launched his Tutor Doctor business in Loughborough in 2017 and started his new life.

“I was working in the very fast-moving tech industry which meant that I had to keep ahead of the curve at all times,” he says. “With the rise of cloud-based self-service software and technology, clients’ spending patterns changed forever and it dawned on me that it was time to leave it all behind. I grew bored of the rat race and needed a new goal. I’m passionate about delivering customer service and making good things happen for people, and my Tutor Doctor business allows me to focus on the only thing that really matters – giving my customers a great experience.”

Stephen graduated from Manchester Polytechnic (Manchester Metropolitan) in 1983 with a degree in Economics. His career encompassed sales roles at various multinational IT companies – including NCR, DEC, and Sun. Responsible for high-value contracts and managing relationships with large clients, Stephen’s sales experience underpinned his consistent ability to secure multi-million-pound contracts. When the time came to move on, Stephen’s natural business acumen led him to seek out low-risk opportunities in which he could leverage his wealth of transferrable skills.

He explains: “I wasn’t entirely sure what I wanted to do, but I did my own research on the types of opportunities that were available – things like B2B coaching and sales training. I’d always dreamt about working for myself and franchising provided a happy medium. At the age of 57, starting with a completely blank sheet wasn’t realistic or attractive – I needed something that was turnkey with a proven model. I went to a seminar hosted by NatWest in Manchester that showcased the benefits of investing in a franchise.

“Tutor Doctor was one of the brands to give a presentation and they piqued my interest. It struck me as a clever concept but, without a teaching background, I initially dismissed it as a viable option for me. I soon realised that I didn’t have to have that to get involved. My background in sales and my ‘customer-first’ values would provide the foundations of my business, while the franchising model would fast-track me with the rest.”

Ever methodical, Stephen continued with his search for business opportunities but found himself constantly drawn back to Tutor Doctor. After being approached by a member of the team, he concentrated his efforts into researching the business – and he wasn’t disappointed in what he found.

“Tutor Doctor offered a lot of things that I was looking for,” says Stephen. “Obviously, there was the sales aspect that I felt very comfortable with. The emphasis on the customer experience and service, making a real difference and the fact that it’s a truly local, community-focused business – I felt very strongly that I was the right person to do that and make a success of it.”

In August 2017, Stephen flew to his one-week intensive training in Toronto with his fellow new franchisees. Since then, over the course of just two and a half years, Tutor Doctor Loughborough has grown considerably, not just from Stephen’s own efforts, but with the support of the home office team too.

“Loughborough is a sought-after area, with an aspirational population that wants the best education for its children. And with a UK Top 5 University close-by, I saw that it was crying out for a private tuition service that would cater for a wide range of subjects and age groups – all whilst being professional, personable and accessible,” says Stephen.

“Although I never stop looking for good tutors, I have built up a core team that I know I can trust. They are extremely dedicated and I know that can depend on them as and when I need them. We’ve had situations where tutors haven’t been able to continue working, and a student and others have been on hand to save the day – I’ve even been the Tutor Doctor taxi in some cases where I’ve driven tutors to ensure they can meet their client obligations. It’s those special touches that really resonate with parents and families.”

Stephen believes that his local knowledge has proved vital. He brought his own children up in the area and says that being able to leverage opportunities within the community has helped his business to thrive.

“I’ve struck up a partnership with a local magazine where I write a blog each month. It feels great to be able to contribute with my expertise whilst promoting the business at the same time – it’s a double whammy! I’ve also worked with one secondary school in the area to provide tutoring to two students. They paid to send a tutor to their home and support them with their studies. It’s a great feeling to feel appreciated and be a trusted service. The fact that I’m able to concentrate on the area where I’ve lived for many years is what makes my service so personal. I currently employ 30 tutors providing tuition to over 40 families – I’ve worked with over 140 families since launching,” he says proudly.

After spending 18 months building the foundations for his business, Stephen focussed on the next phase of development – sustaining his growth. He moved into his own office space which gives him the chance to create a better work-life balance and allows Stephen to enjoy the freedom he never experienced before.

He says: “Now the business is in a good place, I don’t have to be in the office to manage it. The business can carry on without me. My laptop has already been to various European countries, including Bulgaria, Poland and Belgium – as long as I’ve got a good Wi-Fi connection, the wheels can keep on turning and I can relax knowing that everything is under control back at home.

“I see this as a long-term business venture that will support me up to and beyond retirement, and I want to create an asset that has real value. My ultimate goal is to become the go-to tuition company in Loughborough – providing fulfilling work opportunities for local people and helping students on their journey towards achieving their own goals.

“I’d spent 32 years working for larger companies and, although the perks were great, I always had somebody telling me what to do. Now, I get up in the morning and think: what can I can today to grow my business, make the service better and help more children?”