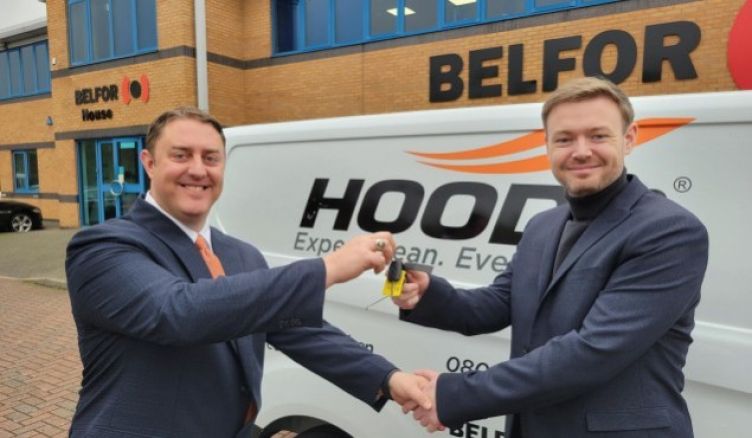 HOODZ has been established for over 40 years. Although a name not known to the general public, it is a name revered within the food industry, as we remove grease and buildup inside the extractor ducts.

HOODZ is the market leader in the U.S. and Canada in commercial extractor cleaning and in 2021 BELFOR Franchise Group UK started franchising the highly successful HOODZ Franchise in both Ireland and the United Kingdom.

Stephen Farrelly, our first U.K. franchisee, was quite excited to learn that the BELFOR Franchise group was expanding into the U.K., as he knew what an exciting opportunity it was and became the U.K.’s first HOODZ franchisee.

Stephen shared why he chose HOODZ: “I always wanted to be a business owner so have been focused on that goal. As soon as I heard that HOODZ were coming to the U.K., I knew it was the business for me.” Since he has joined Stephen is not only very busy but profitable.

Farrelly continued, “Commercial kitchens are always going to get dirty and any business with high standards will always want them cleaned to a high standard. The potential for repeat business is what initially interested me. It then became clear that the bigger draw to the business is actually to help keep people safe from fires, both employees and the residents in the flats above.”

Built on decades of experience

At HOODZ, we find that most restaurant owners and kitchen managers work very hard to keep their premises clean and compliant with the regulations, but not all of them are aware of their responsibilities under the TR19 standards that cover extractions systems and ducts.

BELFOR has decades of experience helping clients clean up and rebuild after devasting fires, thus HOODZ understands the gravity of cleaning and keeping the restaurants and those that live above them safe. In the event of a fire, the consequences are unthinkable as it could threaten lives and destroy homes.

As a customer of a restaurant, you don’t really think about what’s going on behind the scenes, nor does the person that resides in the flat above it. The reality is that if there is a buildup of grease in the kitchen hood, specifically the exhaust system, the potential for fire is high.

Samantha DesRoches, who is the U.K.’s operational coach, says “HOODZ is an amazing franchise built on the solid foundations of BELFOR Franchise Group. Stephen’s commitment to his customers is second to none. His passion and tenacity are what make him a brilliant business owner and I have no doubt his business will go from strength to strength.”

Joe Manuszak, vice president of global development for the BELFOR Franchise Group, shared “Steve is the perfect franchisee, as he has vision, goals, innovative ideas, energy and a well-stated business plan that we are quite sure he will execute fully. We look forward to our growth and expansion in the U.K. and E.U. with an array of brands we are bringing from America.