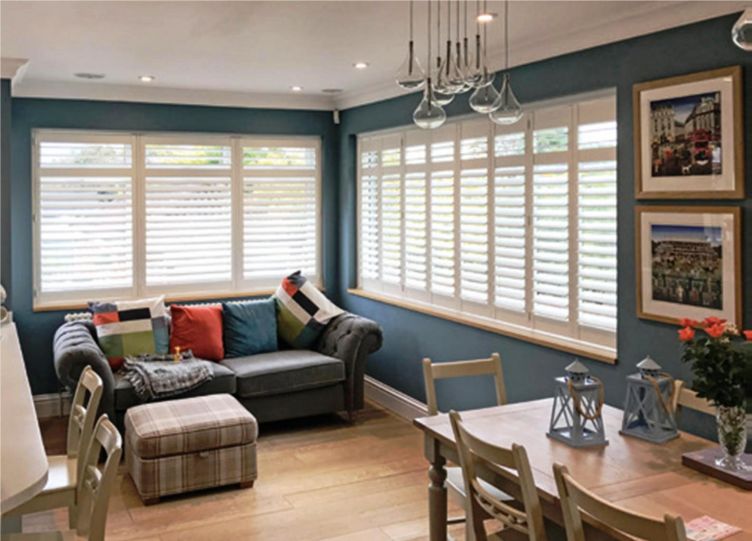 We have designed one of the most ‘franchisee friendly’ management franchise models in the market.”

This was the message from Sean Goldsmith, the Franchise Manager of Shuttercraft, who has taken Shuttercraft to new heights with an innovative franchise model that is shaking up the industry.

The Shuttercraft franchise is the consumer facing division of S:CRAFT, the UK’s largest (and oldest) importer of premium window shutters. The company was originally founded by a brother and sister in London, who recognised the potential of shutters in the UK.

After sourcing locally for a number of years, it became evident that the growth in demand would necessitate changing suppliers who could cope with the scale of demand and so a highly successful relationship with Nien Made, the world’s leading manufacturer of shutters, was born.

The Shuttercraft franchise network started as an ‘owner operator’ model, which rapidly grew and expanded. The first franchisee took to the business like a duck to water and quickly established a foothold in Gloucestershire, where he has dominated the market from the day he launched.

Bristol and Northampton quickly followed and both territories are still incredibly successful and are the dominant shutter supplier in their territories.

“We are doing very well as a network,” Sean says. “We have seen exceptional year on year growth across the board and this is despite many other industries reporting a downturn in sales.”

When asked why this is, Sean simply states: “We sell a premium product and offer exceptional service to go along with it. The customers we sell to tend to be people who demand a quality product and who are more resilient when it comes to the ups and downs of the economy.”

This certainly seems to be the case when you look at the hundreds of five-star reviews across the franchise network.

With this positive outlook, Shuttercraft made a bold move and reinvested in its people and infrastructure. In 2016 Sean was brought in to drive the growth of the network.

“Within a week of joining Shuttercraft, it became clear the business had to transform into a management model,” Sean explains. “Several of the franchisees were making profits that outperformed some of the best known international franchises in Britain. Their main limitation was that they didn’t have more hours in the day.”

In January 2017 the first of the ‘new breed’ franchises was launched in Winchester. Nigel Luke had come from a project management background and hit the ground running. In his first year he achieved £250,000 in sales with outstanding margins.

Nigel was quickly followed by Charlie Scott in Nottingham, who also exceeded his targets to the extent that he is already ranked seventh in the company’s franchisee league table.

This is an extraordinary achievement from the Ex-divisional Head of HomeServe, who decided to join the franchise based on his previous experience as the Head of Marketing for Rainbow International, a highly respected disaster recovery and specialist cleaning franchise.

“Charlie’s growth has been strong and steady,” Sean says. “He had a plan from the start, he stuck to the model and is now reaping the rewards. He has grown to the extent where he now has two fitters and is looking to take on a second territory.”

The success stories continued to roll in, with Alan and Paula Hibbens taking on Shuttercraft Cornwall, while saying goodbye to senior positions in the corporate world. Alan and Paula have made an incredible success of the territory and have tapped into the holiday home market.

When asked about her clients, Paula says: “Approximately 70 percent of our business comes from people who have second homes here in Cornwall. In fact, it’s such an important market for us that we advertise our services in magazines in London.”

Interestingly, Shuttercraft has also seen a big rise in franchise enquiries from existing shutter professionals. In recent months Shuttercraft Warwick launched under the leadership of Martin Jones, who had previously cofounded and run a successful shutter company with his wife.

Martin’s first five months of trading have been exceptional and he’s on track to break all first year sales records within the Shuttercraft network.

He says: “I have a vision and I’m willing to work hard to achieve the goals I set myself in the short term. After a couple of years, I will start handing over responsibility to my team, so that eventually the business runs itself.”

Shuttercraft’s ‘franchisee first’ approach has also extended through to its management service fees, marketing fees and product discounts too.

In an unprecedented move, Shuttercraft has implemented a management fee structure that reduces based on hitting sales targets - this happens in tandem with an increase in the percentage discount the franchisee receives.

The result is a reduction in fees and an increase in discount just at the point where franchisees are thinking about expansion.

“Ultimately, you’re paying a management fee of only three per cent, which is unheard of in the franchise industry,” Sean says. “We have also taken the bold move of putting a cap on the management fees, which gives our franchisees a massive incentive to grow.”

Shuttercraft has also invested heavily in new staff and has a dedicated Consumer Marketing Executive, as well as an exceptional SEO Manager on board. It’s particularly strong on the SEO front and all franchisees are at the top of the Google listings.

When asked about the role of SEO, the company’s Marcus Scott says: “We have developed a system for ensuring our franchisees are very highly ranked on Google. The impact of it is far reaching and can have a direct impact on everything from your map’s ranking to the cost of your PPC.”

Shuttercraft has certainly taken things to a new level when it comes to supporting the growth of its franchisees. From the structure of the management model through to the marketing and training, it’s invested in the infrastructure and resources to make a seemingly ordinary business into something distinctly extraordinary.