“It’s so much more rewarding than my other jobs” 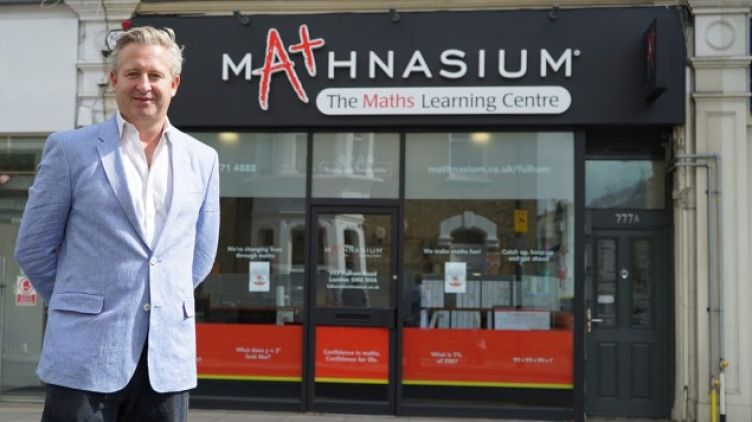 Experienced businessman, Dan Tregoning, explains why Mathnasium was exactly what he was looking for

It shouldn’t happen to a franchisee – but, in Dan Tregoning’s case, it did. He was only eight weeks into the launch of his maths tuition franchise in Fulham when coronavirus swept the UK and he was forced to close his doors.

The situation could have been catastrophic but Dan, a highly experienced businessman, found it propelled his business forward in a way even he could never have expected. With no one coming through the doors, his only option was to take the tuition online – and that’s when he discovered the true benefits of being part of a successful international franchise operation.

Brand power
Instead of struggling alone to find a way of converting his business from face-to-face to online and picking his way through a minefield of software options while his income dropped through the floor, Dan had the solution at his fingertips: Mathnasium had spent years piloting an online model that retained the proven exceptional quality of its in-centre tuition.

Mathnasium’s experts trained Dan’s instructors to use it and enabled it to go live in double-quick time.

“We helped our students progress to online learning instead of coming into our centre,” Dan recalls. “Their parents were extremely supportive and we’ve had terrific feedback as a result. The response has been fantastic. Having the online model all ready to go was transformative for us. It would have been so different if we’d been an independent company and suddenly had to transform without any help.

“Traditional schools have had to resort to Zoom or Microsoft Teams just to do their teaching, and the results have been very clear. They just aren’t as productive, whereas our online system is almost a complete replication of what we do face-to-face in the centre.”

Dan also had to rethink everything he knew about marketing – or, rather, Mathnasium’s experts did it for him.

“When nobody’s walking the streets in lockdown and nobody’s really going out, some of the typical marketing methods vanished overnight,” he says.

“Before the pandemic, our key marketing assets were our signage and the frontage of our unit, but all that disappeared and we weren’t getting any drop-ins or walk-ins. We had to re-focus our marketing online, through Facebook, Instagram and other methods, so it’s been great to have the team at Mathnasium’s head office here in the UK to help us out with that.”

The relaxation of lockdown allowed Dan to reopen his doors in June, and he had a good response to the mixture of online marketing and leaflet drops he did in his target area, with numbers growing consistently ever since.

“It’s hard work,” he says, “and it’s certainly something you’ve got to throw yourself into – but that’s easy when you’re enjoying doing something,”

As if launching a franchise and coping with the coronavirus curveball weren’t enough, Dan managed to squeeze in having a new baby in April, saying, with some understatement, that he’s been “fairly busy with that”.

From property finder to franchise owner
Dan’s resilience and determination developed years ago when he trained as a chartered surveyor and set up a partnership to advise education-sector businesses on their real estate. He went on to acquire a business brokerage dealing with mergers and acquisitions - or transfers of educational businesses - and Dan keeps that going alongside his Mathnasium franchise.

“A member of Mathnasium came to me looking for real estate for prospective franchises,” he recalls. “I’d always been looking for a way into the operational side of education and the opportunity was suddenly presented to me. I started doing a bit of digging, then spoke with a former employee who demonstrated the top-level figures to me.

“The franchise model was the reason I chose Mathnasium. I didn’t want to spend too much time setting something up from scratch. It appealed to me because although it wasn’t quite an oven-ready business, it was certainly a very good package, and the support network for setting up my franchise here was highly attractive. I told them that if I were to become a franchisee, I really wanted Fulham as my territory. I know it extremely well, I used to live there, and I’ve got a lot of friends who live here, too.

“I know the retail pitch and I know the demographic – and, as I told them, I knew all that long before Mathnasium knew it! Needless to say, I managed to get this unit in this location and we‘ve progressed from there.”

Community focus
He describes the journey to opening the doors as hugely important, involving securing bank finance, finding a property, fitting out the premises, marketing, and recruitment.

He says: “When we opened our doors to the public for the first time, we soon realised we were there to help parents, those parents wanted us to be there, and we very quickly became part of the community as more and more parents began coming in. It very quickly became a very fulfilling way of life for me, and having another business sitting alongside it worked really well.

“Apart from what I was able to offer the local community, the financial side of things made it an attractive proposition and ticked all my boxes of where I wanted to go. You don’t realise how fulfilling it will be until you see the smile on the kids’ faces when they go out the door. It’s so much more rewarding than my other jobs. That’s the stand-out thing I enjoy about the business and the most satisfying element of it.

“We may be small and early in our journey, but I’m confident we’ll become increasingly important to the community as our name gets around.”

Dan hopes eventually to own many centres and territories – something that most Mathnasium franchisees tend to do – but he’s taking it one step at a time, focusing on success in his first before branching out.

He’s already ahead of his projections despite the three-month interruption and has a growing number of children using his service, so thinks it won’t be too long before he launches his second centre.

Useful insights for anyone hoping to follow in Dan’s successful footsteps
• Be prepared to work hard. There’s a lot of hard work to be done. And I’m speaking as a centre owner with a manager in place.
• Know your location. That will help in the way you go forwards.
• Be organised and adaptable.
• Ensure you have a genuine affinity with parents and children. Being able to engage with children is hugely important. When a mother and child walk in, my focus goes directly to the child and I’m starting to engage with them before even acknowledging the parents. If I can strike a chord with the child immediately, the parent is going to feel extremely comfortable.
• Being able to turn an interested party into a customer is important, so know your product. But it’s an easy product to sell in some ways because you’re selling improvement, you’re selling a positive thing, and it’s also the most important skill in school: the ability to do maths.

So, does Dan have any regrets about becoming a Mathnasium franchisee? Apparently not. “It’s been a rollercoaster ride,” he says, “and it’s been an interesting time in which to open a business, certainly. But the support from Mathnasium and the look on the children’s faces as they lose their fear of maths makes it all worthwhile.”