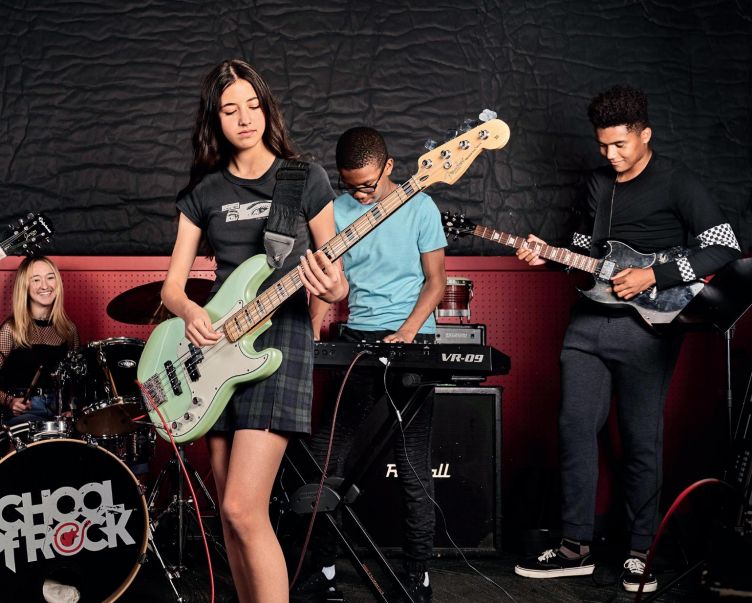 As School of Rock comes hot off the heels of a record-breaking year, the musical franchise favourite sets its sights on further success

Last year was instrumental in the development of School of Rock. The worldwide music phenomenon, which specialises in teaching kids of all ages how to play like their favourite rock stars, has been on the up for over two decades now… and shows no signs of stopping.

“Both on the domestic and on the international scales, we feel like we’ve had a very successful year in development,” says Anthony Padulo, chief development officer for the franchise. “This has been, historically, our most successful 12 months since we began franchising around 13 years ago.”

That’s much more than just a bold claim; School of Rock signed 35 new franchise agreements in the U.S. in 2019, which is a huge milestone, as the brand would traditionally cap off at around 25.

This number is further bolstered by School of Rock’s overseas achievements, as it signed up four entirely new country license agreements – taking the toe-tapping concept to young rockers in Columbia, Paraguay, Spain, and Portugal.

“The thing that makes me happy about those countries is that all four agreements were signed with existing master franchisees,” explains Padulo. “To work with an existing franchisee who already understands the business, opportunities, and challenges of the franchise – and are still willing to expand with us? For me, that’s the best validation you can get.”

Existing franchisees make up a big part of School of Rock’s steadily growing portfolio, as across the last two years, an estimated 25 to 30 per cent of new franchises have been awarded to entrepreneurs already a part of this melodic family.

So what’s the secret behind School of Rock’s consistent success?

“I think the reason we’re doing so well is that music has such a universal appeal,” says Padulo. “Unlike a food business where you may have to adapt the concept for local taste, we don’t have that issue. Whether you’re in the U.K. or South Africa or Brazil, there might be variations of local rock, but the basic premise of English-sung rock music is universally accepted.”

And while local flair is certainly included in the School of Rock curriculum, some legends transcend borders: The Beatles, David Bowie, and Bruce Springsteen are heard at every location, taught by veterans of the industry. Not just heard, mind you, but thunderously echoed through the hallways: “We’re definitely looking for somebody who doesn’t mind the noise,” laughs Padulo. “That’s always our first criteria because while it’s music, it is noisy!”

If tolerance of noise is one of the primary criteria for a School of Rock franchisee, what else is important when joining one of the most successful and exciting education franchises in the world?

“Because 85 per cent of our business is children, you want somebody that enjoys being around children,” says Padulo. “Of course, you also look for people who are financially well qualified, and who can put together the required infrastructure for the model.”

When looking for international master franchisees, as opposed to domestic franchise partners in the U.S., School of Rock favours individuals with prior experience. Not just with music, but with business development as a whole.

This is something ingrained in the franchise’s culture, as Anthony Padulo has been in franchising for almost four decades; working in numerous industries and mastering the art of taking a concept overseas.

“You might say, ‘Why do you want an existing master franchisee?’” says Padulo. “In my experience, having an existing master of another business is very helpful, because that person or group already understands franchising. It’s all about creating trust, creating relationships, and understanding the differences and intricacies of working between a franchisee, master franchisee, and franchisor.”

The only way is up

School of Rock may be flying high, but it’s far from done. In 2020 alone, the brand predicts an even stronger year that will see 35 new domestic openings and around 20 international locations. These overseas schools are set to take the brand to entirely new shores, as School of Rock targets Ireland, the U.K., Italy, Germany, and South Africa. The latter has a single unit in the country, but the others are completely new ventures for the globetrotting franchise.

Looking beyond that, School of Rock plans to grow from between 35 and 50 new schools every year, domestically, and at a rate of two to three new countries. Ambitious? Sure. But it’s got the track record to back it up.

The franchise is far from foolhardy, however. “We’re not the kind of franchisor that comes out, says we’re going to do 150 locations a year, and then five years later they all start closing,” says Padulo. “We’re looking for sustainable, solid growth; growth at a rate which allows us to not jeopardise or compromise on the level of quality and support that we’ve been providing over the last few years.”

For Padulo, the message is clear: “We have plans to be responsibly aggressive. We’re very bullish, but we plan on growing at a reasonable rate that we can sustain.”