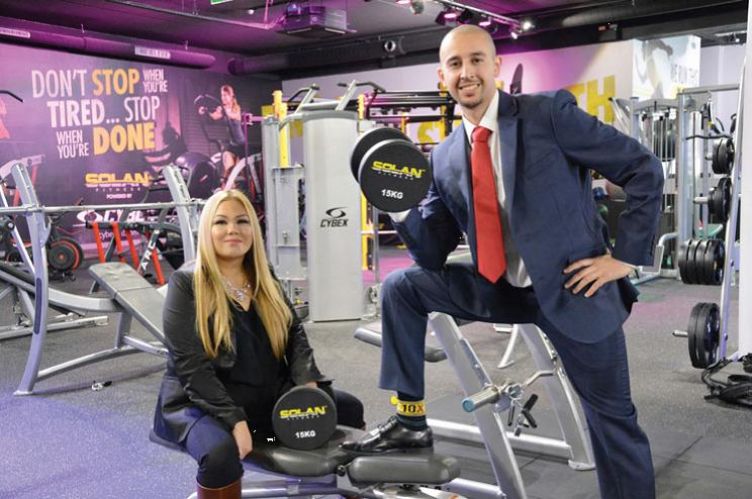 After establishing multi award winning gyms, the founders of Solan Fitness are launching their franchise concept in the UK

Due to the success of its clubs in the South of England, Solan Fitness has recently launched its franchise model in the UK.

Owning multi award winning gyms, as well as having an extremely profitable business model, the founders of the brand decided to scale the business and franchise the Solan Fitness concept, as they’re committed to helping entrepreneurs become financially free.

Husband and wife team Rachelle and Josh are dedicated to spreading their knowledge, experience and mentoring their franchisees to help create wealth and success.

Rachelle says: “We believe entrepreneurs can turn their passion into profit and we can show them how.

“We have got first-hand experience in every aspect of running your own club from a business owner’s perspective and we understand the frustrations and problems. However, if you have the solutions and systems in place, business is profitable, rewarding and fun.”

Solan Fitness is a true ‘rags to riches’ story within the fitness industry. The duo embarked on their journey with just £400 back in 2008 with no financial funding and support, no formal education and no industry experience.

However, throughout the years they worked hard and studied their industry, competitors and thriving businesses. Their passion, resilience and relentless work ethic was the drive behind the success of their first club, based in Orpington, Kent, which funded their second club.

Rachelle and Josh have built Solan Fitness from a start-up that was organically grown, developing it into a turnkey business that’s producing healthy, profitable results. Because of this, they’ve won multiple titles for having one of the UK’s best gyms. Now their focus is on scaling the company nationally and internationally.

Rachelle and Josh are not from privileged backgrounds. Rachelle was originally born in a deprived part of the Philippines and up until the age of four was raised in severe poverty.

Her single mother was a qualified nurse. However, the opportunities for work were not great in the Philippines, so her mother left Rachelle in her grandparents’ care and came to the UK to work as a nurse for a few months.

Rachelle arrived in the UK when she was four to begin a new life and appreciated the opportunities the UK offered.

Josh grew up on a council estate in South East London and came from a working class background - his mother was a cleaner and his father had various manual labour jobs.

Suffering from dyslexia, Josh left school at 14 and was labelled a school dropout. He put all his focus and energy into becoming a great martial artist.

Sharing a passion for fitness and business, when they met the couple aimed to create clubs that are results focused and where everyone meets to train as a squad.

Josh explains: “We build gyms around the members’ needs, focusing on achieving results and only believe in delivering the best equipment with the best service.

“Being priced within the middle market and adding value to the members’ experience, our first club grew from strength to strength, which allowed us to open our second club.

After spending four years developing the concept, the duo launched a second club in East Grinstead in February 2017. With strength and combat at the core of Solan Fitness, the gym offers a mix of Cybex resistance equipment; a Jordan rig, with monkey bars, squatting stations and battle rope; a functional zone with a 20 metre sprint track; and a HIIT circuit.

There are also three studios, one of which is a combat zone, as well as boutique classes and The Fuel Hub, which sells protein shakes and supplements.

Solan Fitness’ flagship club recently won the UK’s Best New Comer Gym of the Year 2017 award, while its Orpington club won multiple awards in 2015, 2016 and 2017 for having the Best Strength Training Gym, Best Combat Zone Gym (two years in a row) and the Best Gym Team of the Year.

“Many people underestimate the fitness industry,” Rachelle says. “As people love training, many think it’s easy to operate and run a gym - that’s far from the truth.

“There are many gyms closing daily. Even if you are a business person in other industries, fitness is very different as trends are changing and you must constantly be upgrading and studying your industry closely.”

Solan Fitness launched its franchise model in October 2017. The company has already had several hundred enquires and recruited four franchisees, who will be opening their businesses in 2018.

Solan Fitness is the only fitness franchise to offer a Millionaire Mentorship programme.

“Just like training, business is all about mindset,” Josh says. “If the mindset is strong and capable, you can achieve anything - nothing is limitless.”

Rachelle adds: “We’re on target to open over 200 clubs in the UK and have had interest from Europe and the Middle East to open more clubs. We aim to dominate the UK market, spread to the EU, Middle East, Asia and then go global.

“We know there are many fitness franchises out there, but all are lacking and missing key ingredients to ensure their clubs are profitable, which we have with the Solan success formula.”