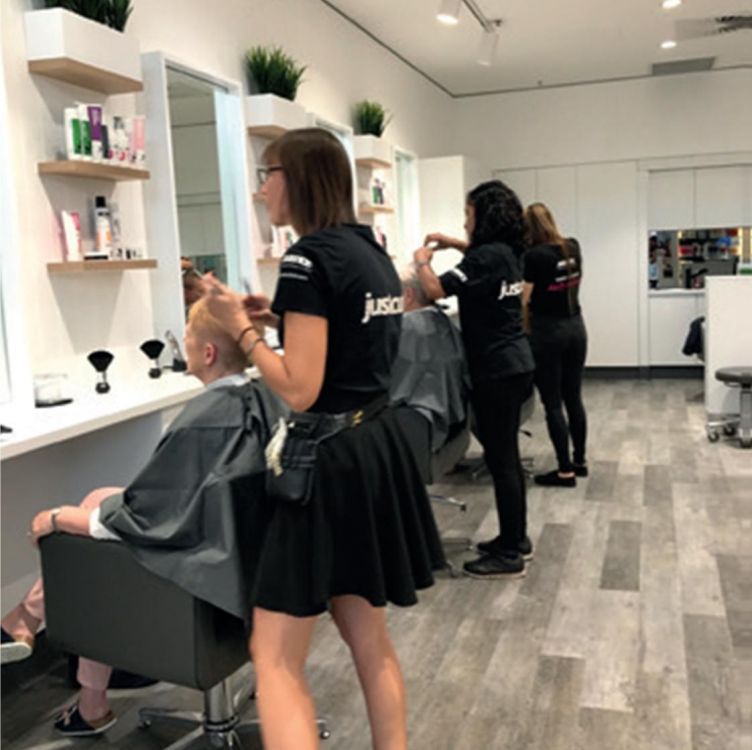 Just Cuts, the biggest hairdressing company in the southern hemisphere, has brought its opportunity to the UK

What’s the first thing that pops into your head when someone says: “Australia”? It could be a kangaroo. Maybe it’s a barbeque. Or possibly the Great Barrier Reef. But you would be forgetting about one of the biggest things from Down Under since Neighbours brought us Kylie and Jason: Just Cuts.

Just Cuts is the brainchild of Denis McFadden, starting when he decided that everyone should have the chance to benefit from a no appointment, no fuss $6 haircut.

After a brief spell as a hairdresser and salon owner in London, the place he called the ‘centre for hair fashion’, he returned to Australia in 1979, where he began to formulate the idea in more detail.

In 1983 he hosted a single promotion to boost business at his humble salon in Sydney, where he allowed his customers to benefit from the special $6 haircut offer. After it proved a big success, Denis wanted the whole world to get a piece of the action.

Now over 30 years later and having franchised the business, Just Cuts has grown to be the biggest hairdressing company in the southern hemisphere and has brought its opportunity halfway across the world to the UK. While you still don’t need an appointment at a Just Cuts salon, today’s charge is closer to £20 than $6.

At the beginning of 2019, Denis and his franchise team were welcomed back to the capital and the hairdressing giant opened its first franchised salon in the UK, having already proven the concept in the UK at a company-owned salon in Essex.

Utilising Denis’ ingenious business idea, franchise owners can open their own salon and bring the Just Cuts’ buzz to their local community. It’s individuals like Magda Deaconescu, who jumped at the chance to open her dream salon in Wandsworth, who will help the franchise model be just as successful in the UK market.

This forward thinking 38-year-old previously worked in the corporate sector.

After spending a few years away from the rat race raising her two beautiful daughters, she decided to take up the challenge of business ownership, but was a little nervous about being completely on her own.

Magda explains: “Ask any mum, work-life balance is really important, but now my girls are a bit older, I’ve realised the time had come to chase one of my dreams.

“Just Cuts is huge in Australia and New Zealand, so when I found out they wanted to expand across the UK, I sent them an email.

“The whole business is very family oriented, so it aligned nicely with how I felt. Since launching, the support has been phenomenal. I’ve never once felt left out on a limb and I know the phone line is always kept open for me.”

But Magda is just the beginning of the story for Just Cuts’ 2019; the company’s plans to open 10 more salons in the next year is ambitious, but achievable. Franchise owners will have the opportunity to run a salon their own way, incorporating personal flair into the way the business works and giving the local community an injection of fun.

If you’re thinking that you need plenty of hairdressing experience, you would be wrong.

Franchise owners are not the ones who will be cutting the hair - their job is to get the salon up and running. But they also won’t be on their own for any of this either. With the investment, they get the help of a dedicated Academy Team. Whether it’s the grand opening marketing campaign or the recruitment of stylists, rest assured you’re not doing it alone.

This means you don’t need to worry about how to get your salon doors open or how to best develop a system to ensure your customers leave satisfied. You don’t even need to worry about creating training programmes or nailing down operational processes for accounts and stock inventory. All this is included when you make your investment and the Academy Team share the fundamentals to get your business up and running smoothly.

Just Cuts wants the focus on providing the best service to your customers, ensuring they keep coming back. Your team of stylists will be taught the best techniques, but it’s your responsibility to deliver them.

The market for Just Cuts in the UK is huge - and constantly growing. Not only is there a demand for a new salon experience, but who doesn’t want a premium cut at a not so premium price?

Just Cuts aims to revolutionise the way in which we get a haircut. Its loyalty-based incentive scheme allows customers to get points from their cuts, which when they have accumulated enough can be used for a free cut.

The company’s commitment to ‘no appointment necessary’ still stands.

Through a bespoke smartphone app, customers can view wait times at their nearest salon and join the queue at the location of their choice, meaning they don’t have to wait for their slot to become available. They can complete other errands after they’ve booked their space in the queue and turn up at the salon when it’s their time.

Just cuts gives the customer the opportunity to take control.

Amber Manning, the UK CEO of Just
Cuts, feels privileged to bring the opportunity to the UK: “It’s amazing that we’ve come full circle to where it all started for Denis.

“We have the chance to revolutionise the salon experience for a lot of customers and that’s really exciting.

“For franchise owners, it’s a real opportunity to build a profitable business with great personal satisfaction. Our Australian franchise owners feel proud of their businesses and we are sure that Brits will too.”