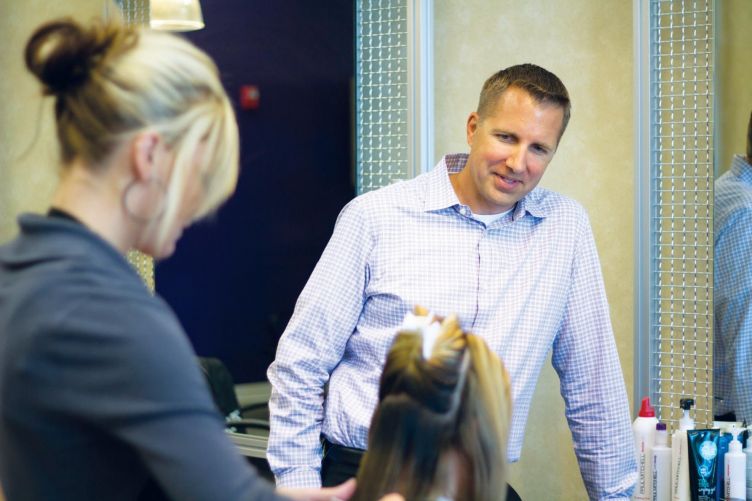 Brian Papenberg had the dream, just like many people with an entrepreneurial drive. Highly educated with a good job and young family, he wanted to not only balance work and family life, but also act on his desire to build and eventually own his own business.

He says: “I’ve been working in corporate America for a little over 15 years, currently as an IT project manager in a large corporation. I always felt like I was missing something.”

And he’s not alone. Brian wanted to find a business in a sector that met many of his criteria, but which was truly a manager-run business, not just appearing to be one.

Going into business for yourself and investing your own money is risky enough, but giving up a full-time income with a young family may be too much for people to overcome.

“Goals for me were ultimate financial freedom,” Brian says. “The haircare industry is unique in that it’s not capital intensive. It allows you to build a business within a reasonable budget.

“You would think that holding down a full-time job at the same time as you’re trying to run a franchise like Supercuts would leave you bogged down on time between the two. I’ve been able to manage that time and still make it to my children’s baseball games and spend time with my family. Things have really come together for me.”

Leading high street salon brand, Supercuts, owned by Regis UK, launched its franchise programme last summer, following the success of a similar model in the US.

There are three important points you need to know about owning a Supercuts franchise:

Supercuts is one of the most recognised and popular salon brands in the UK and caters for over one million clients annually. In the US, Supercuts is the number one haircare franchise.

With 30 years’ of experience, the company has a tested platform and has streamlined salon operations to deliver a turnkey solution to franchisees.

It also has effective marketing strategies; with more than 200 salons across the UK and 2,500 more worldwide, Supercuts knows how to market its brand proficiently in both traditional advertising and on digital and social media platforms.

Supercuts offers continuous training and education to all stylists, so the franchisee can stay focused on the business.

As a franchisee, you will benefit from being able to keep your full-time job and open multiple units, as shown by Brian Papenberg.

Supercuts’ franchise model follows a simple yet effective format that provides individuals with the opportunity to benefit from a high demand, high repeat cash business with potential for growth and development.

Start your own Supercuts franchise

Send a free enquiry to Supercuts for further information!