Close
Did you know?
Belvoir has outlets available across the UK 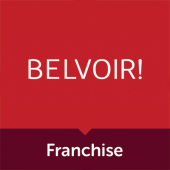 Belvoir has grown in recent years to become the UK’s largest property franchise group, with a total of over 300 lettings offices nationwide.

Many of these franchised offices have now also branched into selling as well as letting and more are planning to follow suit in the future.

Belvoir has been named ‘Lettings Franchise of the Year’ at the Lettings Agency of the Year awards six times in seven years.

Belvoir is committed to providing a quality, professional service to landlords, tenants, vendors and buyers and especially to its franchisees through the support of its central office teams.

Belvoir is a full member of the British Franchise Association - Belvoir’s chairman, Mike Goddard, was also chairman of the BFA for from 2008-11. It is also a founding member of SAFEagent, an industry-recognised mark denoting that firms are members of a recognised Client Money Protection (CMP) scheme.

What is the history of the Belvoir franchise?

Belvoir was founded in 1995 by Mike Goddard, who had spent seven years as a teacher in Kenya and, in 1979, returned to England, taking up a commission with the R.A.F. During his 17 years of service he rose to the rank of Wing Commander, but left when he decided that his role had become more administration than educational.

With his wife, Stephanie, he set up Belvoir, but had no plans to turn it into a franchise until it was suggested to him by a friend working on the resettlement of former military personnel. With many soldiers looking for new opportunities when they returned to civilian life, Goddard opened his first franchise in Moray, Scotland, in 1996, and soon had a network of 12 franchisees, all ex-military.

Belvoir was the first specialist residential lettings agency to be listed on the AIM market at the London Stock Exchange. Floated in February 2012, this attracted shareholders to the franchise network, allowing the company to invest in Belvoir’s ambitious expansion plans.

In 2013, Belvoir began exploring the estate agency market and a pilot scheme with ten of its franchisees was set up. To Goddard, this move into selling was inevitable, as when clients had previously wanted to sell properties, they had to be referred elsewhere and the client was often lost.

The purchase of firms Newton Fallowell and Goodchilds in 2015 added 40 additional sites and valuable sales experience to help diversify Belvoir’s holdings and the successful integration of property sales has been rolled out across the network.

The various acquisitions and continued expansion has taken the company to over 300 branches nationwide.

How does the Belvoir franchise model work?

Belvoir’s initial aim for its franchisees is to match the right person to the right territory in the right premises and develop a solid business plan. The area in which the business is to open is thoroughly vetted so that the franchisee not only knows the potential market but also what obstacles they may face.

Access to reliable statistical data for the whole of the UK means that Belvoir can prevent a franchisee from the costly mistake of setting up in an area that cannot sustain the business.

The initial Belvoir franchise fee is £22,500, for which the franchisee receives an exclusive territory and a tried-and-tested business model, comprehensive training, and ongoing support for the extent of their franchise.

The full cost of a Belvoir franchise will vary depending on the area and the franchise model chosen, but is typically in the region of £150,000-200,000. There is a management service fee of 12 per cent each month.

In some cases, Belvoir will assist franchisees by providing up to 50 per cent of the funds required to acquire additional sales and lettings portfolios to grow the franchisees business.

What support and training does Belvoir offer its franchisees?

An enquiry to Belvoir Recruitment will begin the process for potential franchisees to meet with the company at one of the franchise’s discovery days, which are held at the headquarters in Grantham, Lincolnshire. This is when franchisees will learn about the Belvoir business model, meet the support team and other franchisees and learn everything you need to make an informed decision to proceed.

Once an agreement is reached, the franchisee will undergo a three-week intensive training course at Belvoir’s HQ that will put franchisees on the path to earning a BTEC Level 2 accreditation. The expert trainers and the Belvoir support team are on hand to provide training and support on an ongoing basis.

Quarterly business meetings will keep you in touch with other franchisees.

Belvoir assigns each new franchise partner with a business development mentor with in-depth industry knowledge, who works closely with the franchisee to prepare their business for trade and, once open, to help achieve a solid base from which the business can grow.

A premises co-ordinator will help franchisees seek out a suitable property, negotiate on the franchisees behalf to get them the best terms possible, prepare any legal negotiations and contracts for leasing and refitting of the premises, and offer ongoing advice on everything from rent reviews, lease renewal and expansion planning.

Did you know?
Belvoir has outlets available across the UK

Belvoir offers ongoing training and support, and runs over 40 courses a year, giving franchisees the chance to train in any of two dozen different subjects. All the support team personnel are available by phone to answer questions and to discuss business problems and opportunities. Any changes to legislation is communicated to the network by Belvoir’s legal team and templates for new legal documents are provided to make sure that franchisees are compliant with current legal requirements.

Belvoir also offers support with marketing and IT. Centrally promoted through traditional and digital media, national advertising promotes the brand while marketing materials will be available to franchisees to keep them one step ahead of the local competition.

Each office has its own microsite on the main Belvoir website. A rental software system will be installed for which the franchisee will receive three onsite training sessions with the software provider.

Each franchise operation is audited after 12 months of trading, and checks on various processes within the office ensure the franchisee is compliant in areas including client account procedures, deposit balancing, EPCs, gas safety checks, tenancy agreements and more. The audit, which is then carried out annually, acts as a health check for the business and will make it easier when you choose to move on.

Is financing support available to help set up a Belvoir franchise?

The amount necessary to invest in a franchise will depend on its size and location of the office, but will generally be between £150,000-200,000. Once the true capital requirement has been established, how this is to be raised and deployed can be discussed. However, whatever the amount required may be, Belvoir has a selection of franchise partners, including high street clearing banks, who will help in raising up to 70 per cent of that amount. Belvoir say that franchisees have a 97.6 per cent chance of success, compared to only 50 per cent of independent new businesses succeeding.

What are the potential profits of a Belvoir franchise?

A Belvoir franchise is expected to reach break-even point in around 12-18 months. Bank loans have been repaid after five years, which should increase profits, after which the capital value of the business is expected to rise at around a rate of 1.2 times the business’s turnover, valuing a franchise with a £500,000 turnover at £600,000 — a substantial asset for the franchisee when he decides to retire.

Are any existing Belvoir franchises for sale?

A mature network will sometimes have franchise offices for sale — four resale opportunities have appeared in recent months, priced between £100,000 and £600,000.
Opportunities can be discussed with Belvoir’s franchise support team who will have up to the minute information on franchises for sale. If one is not currently available in the area of your choice, they can place you on their database and inform you should something suitable come up in the future.

Does Belvoir have any further plans for growth?

Belvoir plans to continue targeting areas to establish new franchise businesses. Based on the high levels of market intelligence gathered by the company, the franchise has identified a number of areas that the company believes will prove profitable but in which they have yet to have a presence.

Belvoir is keen to find franchisees who wish to work with the company to establish the Belvoir brand in those locations and any others they believe to be viable.

There has been a significant growth in the residential lettings market in recent years and it is estimated that there will be more than one million more renters looking for properties in the next five years.

In the UK, 4.6m of the estimated 23m households rented their homes from a private landlord. This is expected to rise to 35 per cent by 2032, according to a 2014 Intermediary Mortgage Lenders Association (IMLA) report, which also predicts that the number of households will increase to over 33m and that private and social renters will overtake the number of owner-occupiers.

As Belvoir handles both lettings and sales, franchisees will also benefit from the steadily increasing house prices, which have seen a slowdown in the past couple of years, but are still increasing.

How can I get started on setting up my own Belvoir franchise?

You can introduce yourself to the Belvoir franchise system by attending one of the company’s discovery days. The whole process begins with an enquiry to Belvoir Recruitment. To find out more, or to request further information on franchising with Belvoir, click on the ‘Send Enquiry’ button now.

Send a free enquiry to Belvoir for further information!