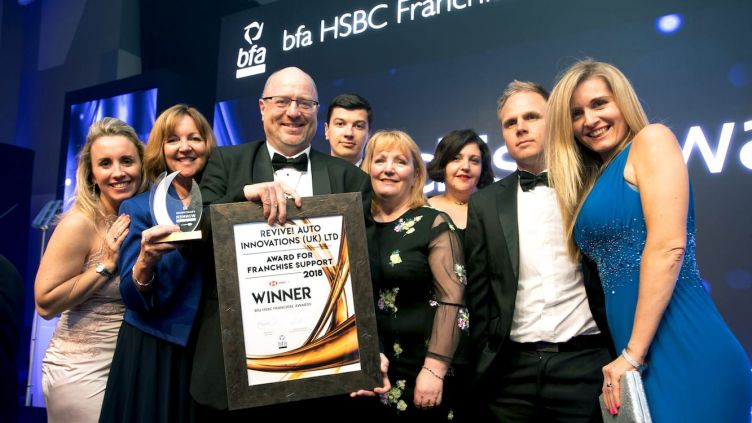 Revive! provides franchisees with the training, business advice, technology and mentoring necessary to grow and sustain a successful business

The award recognises the exceptional levels of ongoing support delivered by head office to its network. Revive! provides its franchisees with the training, business advice, technology and mentoring necessary to grow and sustain a successful business - not just be a man in a van.

Revive! is keen to recognise success within the franchise too and every year at the annual conference a number of franchise awards are made.

At this year’s conference, Mike Haselden from Revive! Chester won the High Performer Award for the northern region for achieving 40 per cent growth. He was also named Revive! Franchisee of the Year.

Steve Thatcher from Revive! Portsmouth won the High Performer Award for the southern region in recognition of his 25 per cent growth year on year.

Mike bought his franchise 13 years ago. He now employs four technicians and runs a fleet of five vans. He previously worked in sales for a tool hire company, but was ready for a new challenge and the chance to give his family a secure financial future.

Mike says: “Being my own boss was ideal for me. I liked the idea of organising my own workload and diary as well as gaining flexibility, but the light bulb moment came for me a few years later when I realised I could achieve even more by taking on more people and expanding the business.”

As his business grew, Mike was invited to join the Revive! High Achievers Group, a mentoring and training initiative run by the company.

“This has been great for me, as you get to see how the larger franchisees are running their businesses and learn how they got there, as well as giving you the extra push to keep moving forward,” Mike says.

He says: “My dad owned his own business and I gained inspiration from him. At the time, I had an IT degree and was working in IT sales, but didn’t want to be on that career path.

“I just had my first child and a mortgage, so it was scary thinking about starting a business with no income coming in, which was why I chose franchising.”

At first, Steve worked on his own. But when the young father found himself working six days a week, he decided the time was right to expand the business, add another van and take on staff.

Steve has been mentored by the Revive! business support team every step of the way.

“We now have five mobile units, with plans for more in the immediate future,” he says. “Part of our ongoing success is down to the fantastic support given by the head office staff at Revive! UK.”