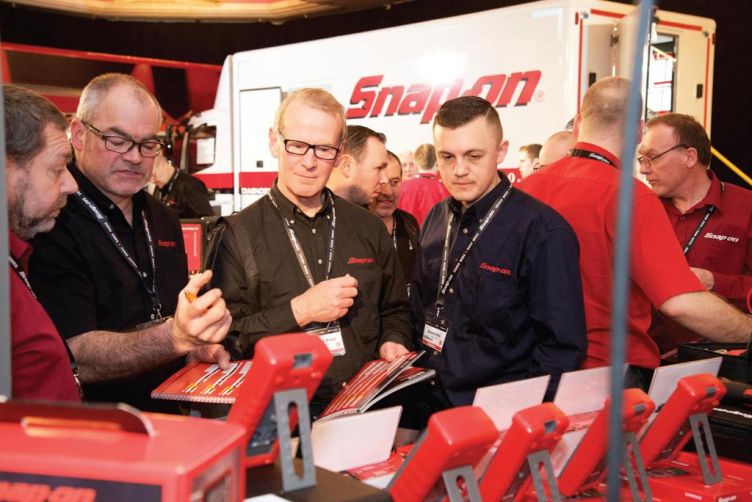 The Snap-on network is enjoying record performance and growth

September 2016 saw Snap-on welcome its 437th franchisee into the network, cementing the business’ place as one of the UK’s largest and most successful franchisors.

In the last three months alone, 17 ambitious business owners have joined the ranks of the Snap-on franchise family. From ex-police officers to mechanics and even former franchisees of other brands, all have found their perfect fit with the tool giant.

Perhaps surprisingly, you don’t need to be a motor enthusiast or even have any motor trade experience to own and run a profitable single or multi-van franchise with Snap-on. Thanks to an award-winning training and support programme, people from all walks of life are maximising their potential through good old-fashioned hard work and the determination to succeed.

Franchisee Luke Hodgson says: “I’m a software engineer by trade. Before I started my franchise, I went to University and took a Bachelor’s degree in Software Engineering. I knew nothing about cars, wasn’t a mechanic, but when I became a franchisee I followed the system, gave it my all and look at me now - one of the most successful franchisees in the network.”

The franchise prides itself on the success of its franchisees - as a testament to its ‘all-for-one and onefor- all’ ethos, Snap-on franchisees reached a National Delivered Sales Average (that’s off the van product, sold to customers in their territory) of a whopping £6,200 per week network wide.

Snap-on is a progressive and supportive franchisor. Its franchisees are encouraged in every way to build their businesses as much as they can. 57 franchisees now own two or more territories and perhaps surprisingly, it’s the under 30’s who are the real diving force of this multi-owner model.

After almost 10 years as an employed mechanic, 28-year-old James Rygor decided it was time his hard work started to benefit him and not someone else. After just one year in business, James ranks fourth in the country for sales, averaging over £11,000 per week. And he has no plans to slow down any time soon.

After graduating from Sixth Form College, James qualified as a mechanic and went straight into full-time employment. Like so many others, after nine years in the same role, he grew weary of working with limited career prospects.

“I was tired of lining someone else’s pocket to be honest; working hard and never seeing the benefits,” James says. “Even with side jobs at the evenings and weekends, I still wasn’t what you would call ‘well off’ and I knew that I could achieve more for myself.

“Once you start thinking about being your own boss, it’s hard to accept staying in a job. I wanted to work for myself, set my own goals and make things happen. That’s when I looked at Snap-on seriously.”

Snap-on is the world’s number one professional tool brand. It’s the leading global manufacturer and distributor of tools for the professional technician. Franchisees deliver gold-standard, premium products to technicians up and down the country. This fantastic business opportunity offers you the chance to be your own boss, whilst being supported by an elite team of industry specialists.

James considered going it alone, but after chatting to his local Snap-on franchisee he realised that this was his ideal route to business ownership. He began his research in March 2015 and by October he was out on the road as a fully-fledged business owner.

James says: “At the beginning it’s a bit daunting, but it’s bound to be, isn’t it? But as with anything, you get used to it and pick things up as you go along. Grahame, my Development Manager, was great. He was with me for about 12 weeks solid.

“He started off with me for three days a week at first, then two, then one and then it got to a point where I was ready to be off on my own. I think the main thing though is that even after that, I could ring him any day, any time and he’d get any problems resolved and help me however he could.

“That’s a massive positive with our franchise. Even though it’s my business and my money at the end of the day, if something needs to be sorted out, Snap-on are really good at helping you.”

You’d be forgiven for thinking that launching a hugely popular and successful business would be enough excitement for most people - and you’d be right. But not James. In addition to his professional dreams, he’s been achieving some personal ones too, having welcomed his daughter into the world just one year ago and marrying the love of his life.

“Snap-on has had a positive impact on my family life, for sure,” James says. “If I was still a mechanic working Monday-Friday, 9-5, doing a bit of cash work on Saturdays and in the evenings, I’d maybe earn about £26,000 a year. That would mean my wife would have had to go back to work without a doubt.

“But now she helps out with some admin for me and the business can pay her a wage, so she doesn’t have to go to work. Thanks to my business, we’re financially better off, my wife won’t have to go back to work and money isn’t an issue.

“I’m still passionate about my business, so I don’t like having days off, but the point is I could if I wanted to and I know I’ll have the flexibility in the future as my family grows.”

At 28, James may seem like a young business owner, but in the Snap-on network being in business by 30 is proving to be a popular and hugely successful theme. James and his young entrepreneur colleagues are taking the UK by storm.

Fellow franchisee, 27-year-old Jonny Nassau has been running his Snapon franchise in South Leicester and Hinckley since April 2015. In just over 18 months, he’s become the top performing franchisee in the UK, taken on an assistant and has just expanded into a second territory.

Despite already being the most successful franchisee in the country, Jonny has grand plans for the future: “My long-term goal is to get to five or six vans before I’m 35 and spend my time working between them, making sure things are running smoothly and eventually get to a point where I can just oversee everything and focus on business development.”

27-year-old Luke Hodgson joined Snap-on in 2011 with no automotive or tool-trade experience. He funded his purchase with the help of Snap-on finance and paid his loan back in under 12 months.

Now, five years later, Luke has expanded into three territories, has average weekly sales of over £10,000 and in 2015 turned over half a million pounds. He was a finalist in the recent British Franchise Association Franchisee of the Year Awards, where he ranked in the top four of all young franchisees in the UK.

“I’ve had some personal hardships to overcome, there’s no denying it, but I’ve got my dream business, I’m carrying on my dad’s legacy and providing for my family’s future,” Luke says.

“I love Snap-on and being a franchisee, so to be up for an award for it was just a cherry on top. I want to get the message out there that you don’t have to have business knowledge or experience to make it big with a franchise business. Age and experience isn’t the key to success - hard work and determination is.

“My plans for the future are big. My business plan sees me constantly increasing turnover and profits. I want to buy a bigger truck, but one thing’s for sure, I’m always aiming high,”

For anyone hoping to replicate their success, James has a few words of wisdom: “Be prepared to work hard. If you want the business to work for you, then you have to commit to it - it’s just common sense. I have to say though, the potential to earn money is unbelievable. I couldn’t get a job earning this much money.”

And the best thing about being a franchisee? James can name a few: “There are so many positives that go along with the franchise you don’t get if you’re working for someone else.

“The products for a start, the support, the knowledge and being part of a network that support you. On a day-to-day basis, you meet so many different types of people - you can have a laugh and genuinely enjoy the work. I think that’s pretty special.”

James, Jonny and Luke are all part of Snap-on’s prestigious ‘£10k club’ - they’re three of 13 franchisees in the UK whose average weekly sales exceeds £10,000.

Since 2015, the club has more than quadrupled in size, going from three to 13. Thanks to Head Office funded initiatives, such as the company’s fleet Rock and Roll Trucks and the brand new TechKnow Express, franchisees continue to enjoy boosts to sales that have a significant impact on their business growth.