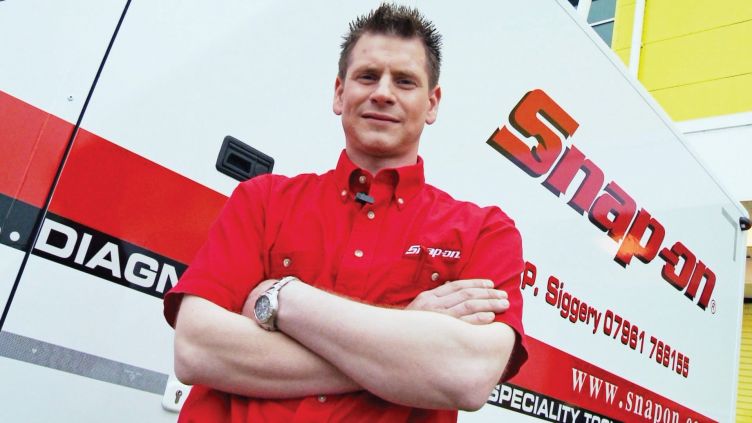 For Paul Siggery, the Snap-on Tools franchise has turned out to be an opportunity like no other

Experience in computing might not seem like the most appropriate skill set for a mobile tool salesman, but Snap-on Tools franchisee Paul Siggery, 29, has found it invaluable.

“When I left school I worked for my Dad in South London, who as well as owning a few different shops, also ran a computing business,” says Paul. “A big part of the Snap-on product range revolves around diagnostic and electronic products, so the experience has come in really useful.”

Aged 18, Paul moved on from the family business and over the next nine years worked first as an apprentice technician at a major car dealership, before being quickly promoted to workshop manager, then moving onto a motorbike dealership to work with a friend.

“Snap-on franchisees came into both places of work, so I knew that the tools were good quality and I liked the idea of running my own business,” says Paul. “Working for someone else means you’ve always got someone looking over you and I didn’t want that any more. I’d also got tired of working with motors.”

Paul didn’t want to take the risk of starting up on his own, so did lots of internet research into different franchises, but decided to go for Snap-on. “Other franchises needed me to invest around £60,000,” says Paul. “For me, that financial outlay was impossible. Snap-on have got various levels of investment, which I found a lot more appealing.

“I also liked the fact that Snap-on products are really good and they have such a strong name. They’ve been around a long time - they’ve been trading since the 1920s - so I knew they weren’t a one-minute wonder. It helped too that the franchisees I’d met had been in the game for 10 or 15 years; they’d obviously stuck around because the business works.” As well as providing tools for customers, Snap-on also helps them with financing, warranty support, service and product education.

“Snap-on are brilliant at finding ways to make the business work,” says Paul. “They say they aren’t recession proof, but they are recession resistant and they really know how to resist it. After all, they survived the Great Depression and the Second World War. They are constantly coming up with ideas to improve sales.”

Snap-on has a dedicated promotions and marketing team who put together weekly promotions with all supporting literature for their franchisees. This includes anything from competitions to feature prices on products. These campaigns are designed to create excitement and increase sales potential.

This allows franchisees to focus on selling tools - the job that delivers the profits. Paul says: “Customers love a bargain. As soon as they walk in they want to know what’s on offer. I make sure I do my own promotions too.”

Other sales incentives include an interest-free weekly payment scheme for customers - for which the franchisee gets paid in full by Snap-on when the tool is sold. Says Paul: “Who wouldn’t want to go for that? It makes what they do affordable. Snap-on are full of clever ideas.”

Paul found the first year of business hard work, but now has things on more of an even keel. “My area is South London and it’s a tough, inner city area,” he says. “But once I’d built up a reputation, things were fine.

“The secret is to make yourself a highlight of your customers’ week. To talk to people, you have to go in there smiling and happy. They have to look forward to seeing you. It’s a big part of the business.”

Paul admits hours can still be long, but he knows he’ll get to a point where it will level out. “Most of it comes down to time management,”

says Paul. “But I’ve more than been rewarded financially for my efforts. Most franchisees are expected to make their target or slightly over, but I’ve doubled on mine. In the first year I turned over £450,000.”

Paul has found the support offered by Snap-on highly beneficial. “You’re not alone,” he says. “You’re not just given a truck with some tools and some stock that you have to go out and sell. There is a training programme. It’s exciting because you learn so much and there’s quite a lot to take in, but it’s never rushed. Everyone is completely clear on how things work when the training’s over.

“There are also sales evenings and sales days. Snap-on constantly finds ways to help you grow your business.”

In fact, Snap-on is so good at helping franchisees to expand Paul has now taken on a second franchise in West London. “It’s being run by what is basically my apprentice,” says Paul. “I’ve funded the business and I help him run it - and we’ve already paid Snap-on back after just six months. Depending on how much money it’s made by the end of the year, I’ll let him take it on. The aim is then to take on a third franchise.”

Another turn-up for the books for Paul is that his family is also involved in helping him out: “The person who puts the most in is my other half, Vicky. She does the banking, the Post Office, helps me out with the stock, on deliveries and other odds and sods. I would say it’s become a family business.”

So does Paul have any regrets? “I’ve been a franchisee now for two and half years,” he says, “and I’m really happy in my job. Every day I get up and enjoy going to work. There’s a lot to be said for that. It’s the fact the business is growing and I’m behind it. It’s having that goal. It’s changed my life, it’s an amazing programme and I would encourage anyone who has a passion like I have for being successful to consider the Snap-on franchise.”

If the Snap-on opportunity is something you would like to explore, why not visit a Discovery Day at the Snap-on headquarters in Kettering, Northamptonshire. This will give you the opportunity to learn more and see for yourself the set up and support Snap-on offers its franchisees.

Snap-on – Be in Business with the Best.