Close
Did you know?
FASTSIGNS is eligible for funding support! 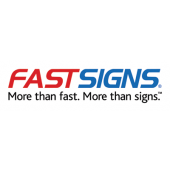 FASTSIGNS specialises in signage, graphics and visual communications solutions, and is at the forefront of the signage sector for technological advancement, high quality...
About
News
Success Stories
Request Free Information

Easy business start-up with a choice of franchise packages – launch a new business, incorporate into a complementary business or convert an existing business. Assistance securing funding up to 70%, with reduced first-year fees to kickstart profit. No technical experience required – comprehensive training in the UK and US provided. A six-figure income is achievable for established businesses - net profit is over 20%.

FASTSIGNS has been making signs since 1985, when company founders Gary Salomon and Bob Schanbaum opened their first store in Dallas, Texas.

Due to the demand for its service, the company began franchising the concept in 1986. It started franchising in the UK 10 years later. Today, FASTSIGNS has around 675 centres around the world, 20 of which are in the UK.

FASTSIGNS is a full member of the British Franchise Association.

How does the FASTSIGNS franchise model work?

There are three ways to join the FASTSIGNS franchise network.

The first option is to open a new FASTSIGNS centre in a protected territory that contains 5,000 potential business clients.

A Co-Brand franchise involves an already established company in a complementary industry operating a FASTSIGNS centre within its premises. The established company would retain its original identity, but would be able to expand its offering to customers and increase turnover and profit as a result.

Co-Brand franchisees also benefit from a royalty fee reduction during their first year of trading.

The types of businesses FASTSIGNS would consider for a Co-Brand partnership include small format printers, graphic designers, photographers, videographers, lithographers and embroidery shops.

Do you already own a sign and graphics company? FASTSIGNS’ Conversion Opportunity means you could convert your business into a FASTSIGNS centre. If you decide to do so, you will be entitled to a reduction in franchise fees and royalty payments, as well as a conversion allowance.

A management franchise, franchisees use the latest digital signage technology and printing techniques identified by FASTSIGNS to fulfil orders for companies working in the manufacturing, retail, sports and leisure, education and healthcare sectors.

How much does a FASTSIGNS franchise cost?

The cost of a FASTSIGNS franchise depends on centre size and the type of franchise opportunity you decide to invest in. However, as a guide, the minimum personal investment required for a new FASTSIGNS centre is £36,000.

Funding for the initial cost of opening a FASTSIGNS franchise is available from banks familiar with franchising - they can lend up to 70 per cent of the cost. FASTSIGNS can help prospective franchisees secure funding, if necessary.

As well as support and training, franchisees get help with selecting a suitable site and negotiating a lease, fit-out drawings, architectural planning, a protected territory containing 5,000 business customers, a pre-opening marketing plan, access to FASTSIGNS’ online management system and an invitation to the company’s annual convention and supplier showcase.

For the first 12 months of trading, franchisees pay a royalty fee of four per cent of their monthly gross turnover, plus a one per cent contribution to FASTSIGNS’ central marketing fund. This rises to seven per cent and two per cent respectively after year one.

How much profit do FASTSIGNS franchisees receive?

In return for their investment, franchisees can earn a net profit of over 20 per cent.

What FASTSIGNS franchises are currently for sale?

Franchises are currently for sale in the south west, north west and north of England, Exeter, Plymouth, Scotland, Ireland and Wales.

Did you know?
FASTSIGNS is eligible for funding support!

What is the typical income of a FASTSIGNS franchisee?

A franchisee can earn a six-figure income once their business is established in its local area.

Where in the UK is the FASTSIGNS franchise based?

What support and training do FASTSIGNS franchisees receive?

Training lasts for four weeks and is broken down into three phases:

• One week at a FASTSIGNS franchise in the UK.
• Two weeks at FASTSIGNS’ global headquarters in Dallas, Texas.
• One week at your new centre.

The support provided by the franchisor is tailored to individual franchisee’s needs. It starts during the opening of your centre and continues via regular contact with a personal mentor and FASTSIGNS’ business consultants, who can advise on finance, marketing, sales, production and managing staff.

Franchisees also have access to the company’s franchise advisory committee.

You don’t need any experience of the signage industry or running your own business to become a FASTSIGNS franchisee. FASTSIGNS wants to recruit franchisees who have managed people in the past and are self motivated, hard-working and want to be their own boss.

The investment allows a franchisee to operate under the FASTSIGNS banner for 10 years.

How in demand are the services provided by FASTSIGNS right now?

All types of professionally produced and cutting edge signage is in high demand by companies in almost every sector you can think of.

Projects a FASTSIGNS franchise business typically assists customers with include:

• Boosting awareness of their location.

• Creating enhanced user experiences of facilities through the use of wayfinding signage.

How can I get started on setting up my own FASTSIGNS franchise?

You can contact FASTSIGNS either by clicking the enquiry button on this page, or by phone or through its website.

Would-be franchisees are asked to complete a short profile form, which will help FASTSIGNS to evaluate your suitability for becoming a franchisee.

You can then attend a discovery day at FASTSIGNS’ head office in Stafford, where you can meet the company’s management team, including managing director John Davies, and have any questions about the franchise opportunity answered.

After the discovery day, FASTSIGNS will arrange visits to the centres of your choice in order for you to get a first-hand feel for how the business operates.

Before you sign the franchise agreement and embark on your career as a FASTSIGNS franchise, you’ll have the opportunity to speak to Mark Jameson, the company’s executive vice president of franchise support and development, who’s based in America.

FASTSIGNS says your franchise can be up and running within six months of your initial contact with the company. However, this timescale will depend on the time it takes to negotiate the lease on your chosen premises, secure funding, complete training and fit out your centre.

To find out more or to request further information on franchising with FASTSIGNS, click the ‘Send Enquiry’ button now.