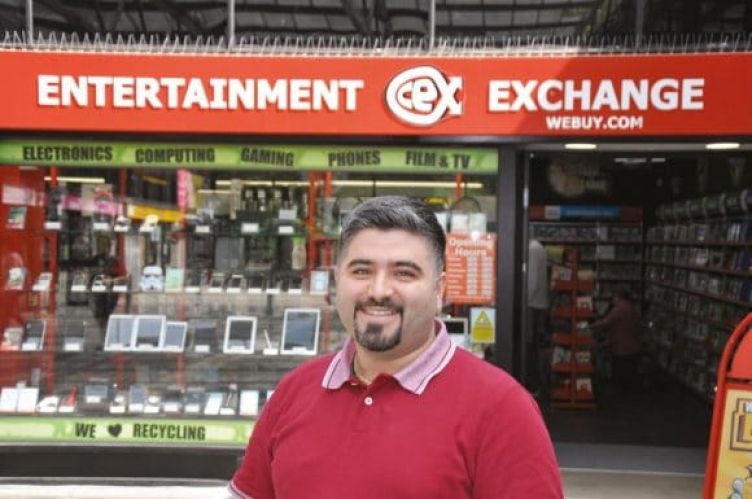 CeX is the gadget lover’s dream franchise. Based on the buy, sell and exchange concept, the business focuses mainly on trading in digital entertainment products.

Goods are tested before they’re bought in and then resold with a 24-month warranty, offering customers value for money and peace of mind.

With so many consumers choosing to upgrade and update their favourite technology on a regular basis, it’s a market sector that will continue to benefit from exponential growth.

In fact, a recent study by professional services firm PricewaterhouseCoopers concluded that over the next five years the UK digital and entertainment industry will grow twice as fast as UK GDP and will be worth £72 billion by 2021. It’s good news for anyone in the technology and entertainment sector.

CeX franchise director Frank Orchard explains: “The brand is publicly acclaimed as a technology and entertainment specialist, where gadgets and tech can be exchanged for credit or cash in store or online at www.webuy.com.”

A CeX franchise offers exceptional returns, with a typical new store generating a return on investment within three years and generating average annual turnover of £1 million.

“Over the past two years we have opened a new store nearly every week in the UK,” Frank says. “And since the business was first formed in 1992, we’ve expanded our network from the UK into Europe, North and Central America, Asia and beyond.

“There are currently opportunities for new franchise partners to roll-out the CeX retail brand in territories around the world.”

Many of the company’s franchisees say they’re happy with the better worklife balance a CeX franchise provides. Others talk of the desirability of being their own boss.

“I love the atmosphere in a CeX store, helping people, and technology,” says franchisee Matthew Freeman, who has been working for CeX for the last 11 years.

“To get all these under one roof and for me to be my own boss had great appeal.”

Former professional athletes Nicholas Atwell and Peter Phillips, who run a store in London, explain: “We’re both passionate about technology, gaming, films and music, so a CeX franchise is perfect for us.

“The culture here is really positive and we’re in an environment that removes much of the everyday boredom and stress you normally get when working in retail.

“We would recommend the franchise to anyone who is not afraid of hard work and loves technology - it’s a hands-on business and a passion for the products makes all the difference.”

Potential franchisees would ideally have a strong interest in technology and a high regard for customer satisfaction, together with business acumen.

The investment requirement for a CeX franchise is from £40,000 capital, plus the ability to raise the balance (total investment is from £150,000 up to £250,000, of which most will go towards stock and shop fitting).

Should the franchise not meet the franchise owner’s expectations, subject to conditions, CeX will refund stock, shop build and fit costs and take over the store management and running costs.

There aren’t many franchises that offer that level of peace of mind.

Start your own CeX franchise

Send a free enquiry to CeX for further information!