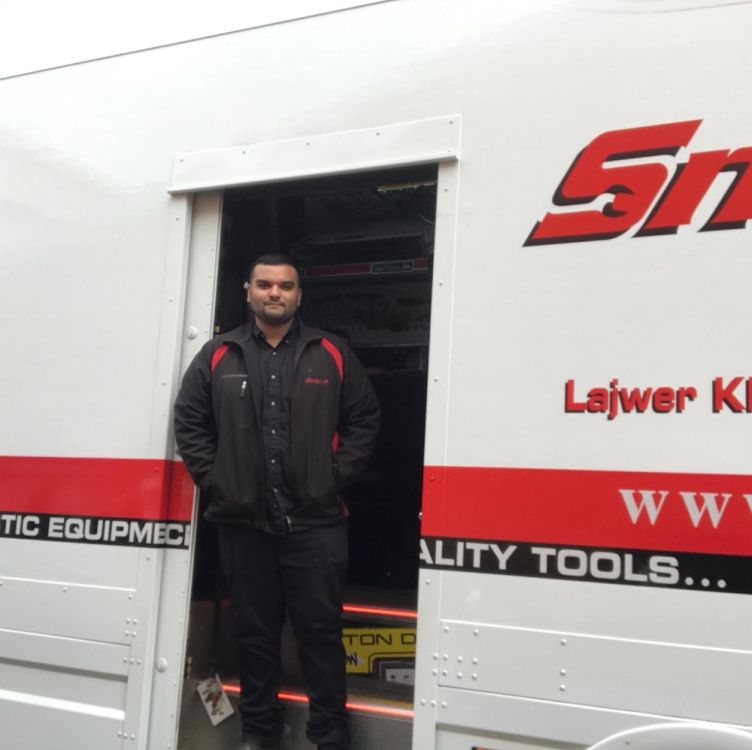 Although Lajwer Khattak has one Snap-on franchise right now, he plans to become a multi-unit franchisee by the time he is 30

Three things motivate 26-year-old dad of one and Snap-on man, Lajwer Khattak – known as ‘Laj’ by his family, friends and customers – to succeed. His desire to earn a good living for his wife and young son, his dream to stay out from behind a desk and his passion for the Snap-on brand. And the former workshop technician knows exactly where he’d like to be in five years’ time.

Laj says: “I might only have one Snap-on franchise right now, but my goal is to become a multi-unit franchisee by the time I reach 30. I launched in my territory less than a year ago and have already doubled my weekly income – not bad for someone with no previous business experience. I’m also not far off buying our first family home, something I would have never been able to afford on a technician’s salary. I definitely made the best decision for my family by buying a Snap-on franchise.”

After finishing school, aged 16, Laj did what so many young people do when they’re a little unsure of what to do next: “I enrolled on a college course, thinking that was expected of me from my family, but my heart was never truly in it. I’ve always been quite a hands-on, proactive person, and felt as though my skills would be put to better use in a workshop environment. So, in the end, I left and started an apprenticeship as a workshop technician. That turned out to be much more my style! It was really encouraging to find something I was good at, in my own right, after years of feeling frustrated in a classroom environment. After three years of hard work, I was fully qualified and ready to move up the ladder.”

The next opportunity soon presented itself, as Laj took on a full-time position with the Japanese brand, Toyota. But, after four years, he felt something was missing and began to feel frustrated by the lack of future prospects. Something had to change.

“When you first start working for an international brand, you assume that there are no real limits to where you can go,” he says. “In reality, I felt as though I’d just become a number – a cog in the wheel. I kept thinking about how much I’d like to work for myself. I’ve always been a hard worker, so motivation wasn’t going to be a problem, and with a wife and a baby to provide for, I knew now was the time to just go for it. I considered opening my own garage, but with no experience of running a business, I questioned whether or not I could do it. Fate offered me a sign, as I came across the Snap-on franchise opportunity.”

During his weekly workshop visit from the local Snap-on man, Arran Dugmore, Laj got chatting with him about the franchise. Arran explained the support he’d been given in the operation of his business and how much he’d built up his franchise since launching a few years previously. That conversation was all that was needed to spark Laj’s passion to sell the most sought-after tools in the industry – and secure financial freedom for his family in the meantime.

“It just made so much sense. In all honesty, I was a little frustrated that I hadn’t thought of it before. My pro-active mindset has meant that I’ve always been good with people and with knowledge of the brand – as a technician – I knew the Snap-on range were the only tools worth having. I knew I could make a real success of my own franchise. I didn’t even give myself time to change my mind. Before the day was out, I got straight on the phone to Snap-on,” says Laj.

The Snap-on team were bowled over by Laj’s ambition and his obvious admiration for the brand. With his experience in the motor trade and his desire to do well for his young family, he was a welcome addition to the 430-strong UK network of franchisees. In October 2018, Laj launched his very own franchise – Snap-on Redditch and Bromsgrove. But before turning the wheel of his state-of-the-art, Snap-on branded store on wheels, Laj was to jump on a plane and take part in his comprehensive franchisee training.

“Although the initial training took place in a classroom-style scenario – which I’d never done well in before – this time it was studying a subject I know and love,” he says. “The training was impeccable, but it was also a real eye-opener. I went there fully prepared to be amazed by the business training but wrongly assumed the tool training would come easily. I thought I knew everything there was to know about the tool trade. Did they prove me wrong! I quickly discovered that all of the training would be integral to my success.

“Thankfully, I was able to take it all in, meaning I felt much better equipped when the time came to get out on the road. I also really enjoyed meeting with people from all around the world, looking to launch their own franchise. It made me realise just how much of a well-oiled machine Snap-on is, and the sheer scale of the network.”

When the time came to fund his new business venture, the young dad looked to the support of Snap-on Tools itself. Snap-on is one of the only franchisors in the UK able to help franchisees fund the purchase of the business. It is done through its in-house bank, Snap-on Finance. Fully regulated and government-approved, Snap-on Finance eliminates the need for the high street banks.

“I really couldn’t have entertained the idea of launching a business of my own without the added bonus of Snap-on Finance<” explains Laj. “My family also leant me funds to get me going – they knew their investment was safe and that I’d likely be paying them back before they even missed the money. Since launching, I’ve done that – and more!

“One of my proudest moments so far was the first time I hit sales of £10,000 in one week. Any Snap-on man will tell you; that’s no mean feat. And I’ve achieved that multiple times since. Whilst money isn’t my only motivation, I also know that I don’t want to be a poor man, and I don’t want any regrets. I’ve never once regretted my decision to buy a Snap-on franchise and – one thing’s for sure – my family will never want for anything. How many young dads can say that?”