My franchise story: “The results I’ve experienced since investing in my franchise have proven that I was born to be my own boss” 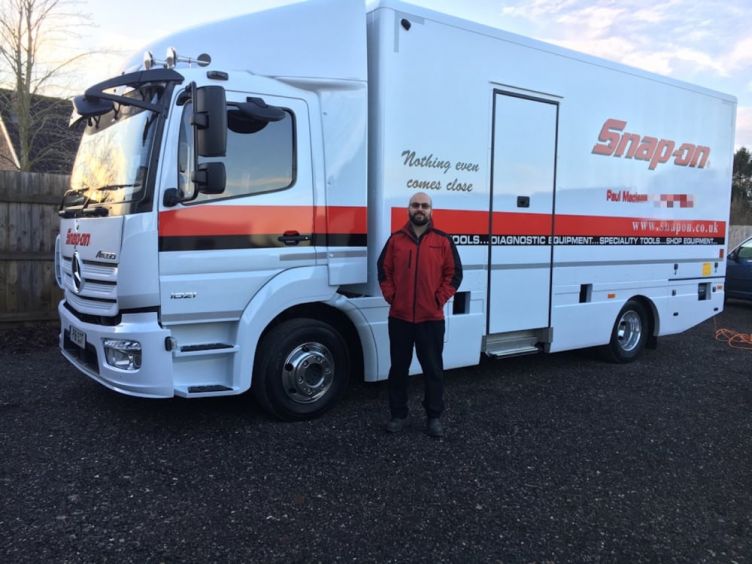 Paul Macisaac, 38, started his career with Snap-on back in January 2012, operating a mobile store for another franchisee. But it wasn’t long before he wanted a cut of the action for himself! Just two years later, he invested in a franchise in his own right. Since then, he’s doubled the size of his business and taken on an assistant, just to keep up with customer demand. Above all else, the dad of two has finally realised the earning potential and career satisfaction he’s always dreamt of.

He explains: “When I took over the franchise in Bury St Edmunds in 2014, I felt as though I was finally on the right career path. In comparison to the other jobs I’d done in the 15 years since leaving college, I was finally going to reap the rewards for the hard work I was putting in. It was a bit of a lightbulb moment if I’m honest – I’d always felt like a bit of a cog in a wheel. The results I’ve experienced since investing in my franchise have proven that I was born to be my own boss. I’m no longer just a number and I’m absolutely loving it.”

Like so many young school-leavers, Paul’s first experience of further education left a lot to be desired: “When I first went to college, I started an IT course, but it just wasn’t for me. I quit a few weeks in and finished the rest of the academic year doing temporary work, just to tide me over. But that wasn’t the life I’d dreamt of for myself, so I went back to the same college the next year and did a National Diploma in Motor Vehicle Engineering. That was much more my scene! I passed that with flying colours and got a job in after sales and distribution at a Vauxhall dealership. I guess the apple doesn’t fall too far from the tree as my dad had worked in the motor industry his whole life, so I liked that I was following in his footsteps.

“After a few years, I left Vauxhall to pursue a career in motor industry sales, which I did for five years, all in all. Don’t get me wrong, I learnt a lot in that time about administration, time management and meeting targets, but my heart really wasn’t in it. I never responded well to the constant pressure to perform, without the proper rewards. I felt that I was going to work hard, then I deserved to be suitably compensated.”

As it happened, a close friend knew of exactly the right career opportunity for the determined young professional – something that would undoubtedly be a challenge but would bring the rewards Paul was so worthy of.

“Those closest to me have always known me as a hard worker – I’m someone that really does put 100 per cent into everything,” says Paul. “I’d always been aware of Snap-on, but it was actually one of my old managers, who I’d come to think of as a close friend over the years, who encouraged me to look into career opportunities with them. I researched the brand and realised it made perfect sense. My sales background and knowledge of the automotive industry would prove valuable and I’d be joining one of the most well-known brands in the world.”

Initially, Paul took on an employed role, operating a Snap-on mobile store for a Suffolk based Snap-on franchisee, Will Hurt. Will took Paul under his wing, explaining all that the franchise had to offer. Within weeks, Paul made the decision to aim for a franchise of his own and worked hard to save enough liquid capital to fund part of his initial investment. Recognising his potential, the Snap-on team were keen for Paul to join the 400 strong UK network, in his own right. Two years later, in 2014 he officially bought the territory he’d spent the last 24 months working in - Bury St Edmunds.

Now, as a fully-fledged franchisee, Paul would travel 4,500 miles to Dallas in the US for his franchisee training, which starts with ten days of classroom-style training. Afterwards, franchisees visit Snap-on’s UK head office in Kettering to meet the staff who will support them on a daily basis and collect their very own custom-built mobile store! Once out on the road, one-to-one training continues with a dedicated franchise developer who rides with franchisees for their first four weeks. As part of a six-month intensive onboarding process, new franchisees receive a further 31 days of on-van support from a sales developer and business manager over the following five months. That’s 51 contact days in the first six months.

Paul supplemented the savings he had worked hard to gather with an additional loan from Snap-on. Snap-on is one of the only franchisors in the UK able to help franchisees fund the purchase of the business. It is done through its in-house bank, Snap-on Finance. Fully regulated and government-approved, Snap-on Finance eliminates the need for the high street banks.

“Before long, I was reaping the rewards of being my own boss,” he says. “In my previous roles, I felt as though I was constantly treading water and working frantically just to keep my family afloat. Within 10 months of taking on the franchise, I’d paid back my loan and not long after that, put a deposit down on a dream family home. Plus, I finally had that sense of career satisfaction that I’d always strived for. I couldn’t quite believe the transformation my life had gone through.”

Since the purchase of his first Snap-on franchise, Paul has doubled the size of his empire – and his family too: “My wife, Helen, and I started our family in 2013, just 12 months before I launched my franchise. Alfie is nearly seven now, and big brother to Jack, who was born in February. Having two little ones makes me even more determined to work hard and earn enough to maintain the lovely life we’ve built as a family. My first van was so successful that I invested in a second in January 2019, run by my assistant Daryl, to keep up with demand. We’re both so busy, which is never bad news, but it’s like I’ve created a monster that I need to keep feeding! I’ve even been able to bring Helen on-board officially, as company secretary. I’m proud to have built such a profitable empire and pension plan for my future.

“Right now, who can say what the future will hold, but I could never see myself leaving the Snap-on network. Who knows, Alfie and Jack might be waiting in the wings to take over their old man’s business one day but, for now, I’m just happy with the life I’ve created for my boys, and it’s all thanks to Snap-on.”