Snap-on Now Serves in Over 130 Countries 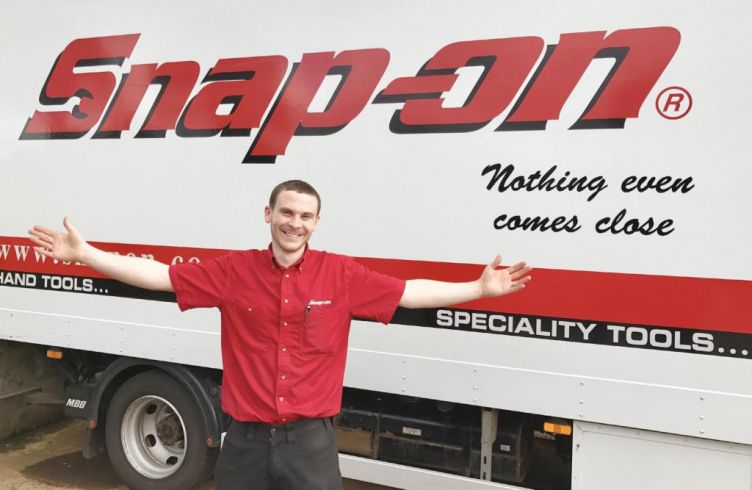 Most franchisors will tell you that you don’t need industry experience in order to be a successful franchisee - and it’s true.

A great franchisor will provide you with the tools, knowledge and support to take its proven business model and replicate it successfully in your local community or chosen part of the country.

For Snap-on, this is exactly the case. It just so happens that many franchisees have an automotive background simply because of their passion for motorsport, Formula One, World Rallying, Superbikes or the industry in general.

But for all those who are self-confessed petrolheads, there are equal numbers of ex-plumbers, software engineers, soldiers, retail salesmen and now, in the form of Kristian Minter, ex-chefs.

Kristian is one of nine new franchisees who joined the Snap-on network in the summer of 2017. He had become disillusioned with his restaurant career, feeling that the pressure and stress far outweighed any personal or financial satisfaction.

Looking for something more rewarding on both fronts, it was a chance conversation with his friend that introduced him to the Snap-on opportunity. After some thorough research, Kristian was convinced his future lay with the franchise.

He explains: “I was having a conversation with a best friend of mine who is a mechanic and he told me about Snap-on because he swears by the tools and knows his local franchisee well.

“I looked into it almost straight away and it seemed like a tried and tested model - they have 95 years’ experience, so they clearly know what they’re doing.

“The more I researched it, the more I felt it could be an amazing opportunity. It didn’t matter that I didn’t have the experience. I’ve been given all the training I need to get off to a flying start and this business is all about building relationship and being a people person, which suits me to the ground.”

By contrast, another new starter who joined at the same time as Kristian already knew all about Snap-on. Mark Hyde is a former field support specialist who used to spend his time out on the road with franchisees helping them develop their own businesses.

Keen to share in their success, he took the plunge and launched his own franchise in Coventry and Leicestershire in June of 2017.

Mark says: “It’s very different being a franchisee, but I love it. Every day so far has been a learning curve, but in a good way. I get more and more confident and comfortable as I go along.

“I enjoy getting to know people, becoming what’s actually not a salesman but more of an advisor/go-to guy for my customers and generally learning about business.

“One thing I do know is that this business is what you make of it - if you put your all into it and try hard, you’ll get the rewards. I’ve seen it myself and now I’m going to experience it first hand.”

As Kristian discovered, Snap-on’s heritage is one that’s worthy of note. Established in the US almost 100 years ago, the brand came to the UK in 1965 and has since grown to become one of the largest and most easily recognisable names in both the motor and franchise industries.

Snap-on continues to thrive and franchisees now serve professionals in over 130 countries worldwide.

Global sales and profitability has increased year on year, with a net sales figure of $3.43 billion reported for 2016. It’s undoubtedly impressive, but what does that look like for the UK?

As Lisa Law, Snap-on’s national franchise manager, explains, 2016 was a record year for the UK network on both a national and local level: “In Q4 of 2016, our franchisees’ average sales were a record £6,981 per week.

“As a country, we saw a national sales increase of 5.72 per cent on the previous year and our franchisees’ average sales increased from 5.2 per cent to £6,561 for the year.

“It’s something we’re incredibly proud of and is a testament to the ongoing support and sales initiatives we implement across the board.

We always say we’ll only ever be as successful as our franchisees are, so we work hard to give them the best possible opportunities to flourish.”

In 2017, Snap-on received yet more recognition that the franchise provides significant opportunities for people from all walks of life to build successful and sustainable businesses.

In its ranking of the top 500 franchises in the world, Entrepreneur Magazine placed Snap-on 34th overall and, for the second year running, first among mobile tool franchises.

Evidence of the growing strength and ongoing positive trajectory across the network was also on display at the annual Snap-on franchisee conference, which had record attendance.

In the spirit of collaboration and openness, Snap-on runs a national sales meeting at the conference to which all franchisees and their partners are invited. The company share year-to-date management and financial information, plans for future development and provide a forum for franchisee input and feedback.

431 out of 437 franchisees attended and two thirds brought their partners and families with them.

Enza Auletta, wife of franchisee Elio Auletta, explains: “Elio has been running his franchise for 18 years and Snap-on has been a part of my life for that time just as much as it has his.

“Being part of Snap-on is to be part of a family. I’m behind Elio 100 per cent, always have been. It’s so important for wives and partners to be as bought into the business as our husbands are.

“And now our sons have joined the business too, we’re well and truly part of the fabric.”