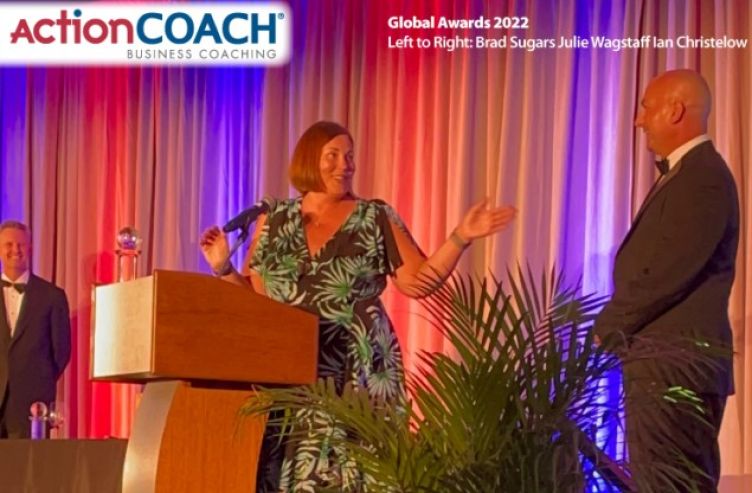 For the 14th consecutive year, ActionCOACH UK‘s team walked away from the ActionCOACH global conference with the award for Team of the Year. With a presence in over 80 countries, ActionCOACH hosted this year’s conference on the tropical island of Maui, Hawaii. Having won the award an astounding 13 times, the 7,000-mile journey could not stop the UK team from bringing it home once more – a remarkable accolade to add to their 10 years of 5-star rating for franchisee satisfaction.

The three-day global conference delivered knowledge and plans for growth, as well as an insight into the future of the business from the senior leadership team. Julie Wagstaff, managing director and Ian Christelow, co-founder of ActionCOACH UK, were presented with the award during the celebration evening.

“The award is a testament to the ongoing commitment and dedication of everyone at ActionCOACH, from our UK support team to the over 200 UK-based franchise partners,” said Ian. “We’re proud our team help so many business owners each year, guiding them towards a brighter future and, in turn, creating more opportunities to help local communities thrive.”

The pair were not the only Brits to be celebrated at the awards – James Burke, who has been an ActionCOACH franchise partner since 2018 won awards for both Global ProfitCLUB and ActionCLUB, celebrating his ability to embody the essence of ActionCOACH and its 14 points of culture.

“After being with ActionCOACH for five years, I’ve seen my business go from strength to strength,” said James. “The growth of ActionCOACH as a brand is a direct reflection of the team and their abilities, and it is only with ActionCOACH’s immense success as a franchise that I now have two global awards and six national awards under my belt. A business will struggle to grow if the team has a lack of clarity but for ActionCOACH it is simple – we want to help businesses thrive, and this award proves we are succeeding in this mission.”

Thirteen UK Action Coaches also entered the President’s Club, recognising each franchise partner’s commitment for five years. A further five entered the Chairman’s Club in recognition of 10 years, demonstrating how being an ActionCOACH franchise partner not only offers you a successful business but a sustainable one too.

Brad Sugars, global founder and CEO of ActionCOACH, is proud to see the collaborative nature of the world’s number one business coaching firm continuing year after year, with over 1,000 coaches supporting over 15,000 businesses a week across the globe.

“It was wonderful to be able to celebrate the achievements of our franchise partners and their support teams,” said Brad. “At ActionCOACH, we believe in making a difference and changing the world through business re-education because being in business should give you more life. Our goal at ActionCOACH is to have a coach in every business and, with the continued dedication of our franchise partners, this is starting to become a reality.”