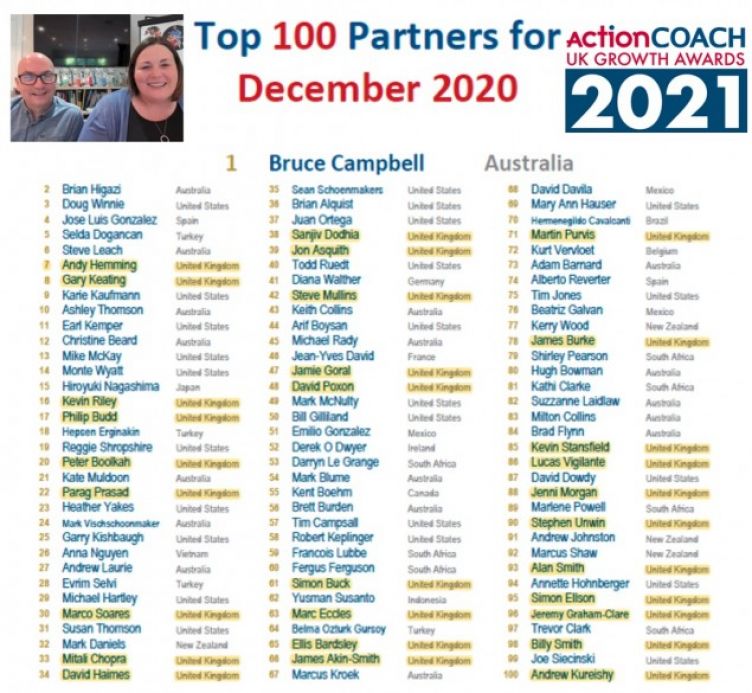 As was revealed at its UK conference, these rankings are a testament to their hard work, determination and passion for supporting business owners across the country in 2020.

The two-day event, which included both a conference and awards ceremony, was held virtually for the 200-plus strong network. But distance didn’t stop the celebrations, as the team shared knowledge, development and recognition following a busy 12 months. Despite the challenging economic climate, Action Coaches have led the way in their respective business communities, gifting their time to support business owners and delivering some of the most impressive results for clients.  Managing director Julie Wagstaff took the lead on the event and is proud of the determination from every franchise partner and their teams.

“It’s always one of the biggest events in our annual calendar,” said Julie. “Of course, it looked a little different and wasn’t quite what we’re used to – at ActionCOACH we put great emphasis on recognition, sharing learnings and camaraderie – but after a mammoth year, it was even more important to celebrate and share the successes with our franchise partners.”

Andy Hemming, from ActionCOACH Black Country, scored a hat-trick at the event. He took home both the UK Coach and West Midlands’ Firm of the Year awards, whilst his team’s work overall helped him clinch the Best Client Results in the West Midlands for a fifth consecutive year.

“In 12 months, we’ve helped a particular client increase net profit by an incredible 140 per cent,” said Andy. “Whilst clients have faced their challenges, we have worked alongside them to continue to grow their businesses. Winning this award is one of the greatest privileges we can get as it’s not about us, it’s about them.”

Another category that created a buzz throughout the digital sphere was Growth Coach. The trophy went to Kevin Riley and his Warwick-based ActionCOACH business, after an increase of 263 per cent in client revenue year on year.

This title follows Kevin’s win at the 2020 bfa HSBC Franchise Awards, where he was crowned the Community Hero, and his record-breaking month in December. The record for the newest clients signed in one month was held jointly by Julie Wagstaff, Ian Harford and Matt Bull, with nine, but it was Kevin who went one better – signing 10 clients in the final month of the year.

“Receiving this award is great recognition, not least when considering many of the outstanding achievements of Action Coaches across the country in the last 12 months,” said Kevin. “It makes all of what we do worth it, and I’m sure I speak for us all when I say doing what I do makes me extremely proud.”

Kevin also achieved Emerald status after consistently banking £45,000 a month of client income. Many other franchise partners are hot on his heels as they move through the ranks to achieve that same goal. With fewer than 75 territories available to invest in, in the UK, and with a plan to have awarded all taken by the of 2021, this year looking to be even more significant for ActionCOACH.

February’s ActionCOACH University is already underway with a cohort that includes two new territory general managers who are part of the next phase for the brand where the franchise is taking on corporate ownership of 40 of the 230 UK franchise territories.

With the UK 20th anniversary celebrations taking place and a £1m 10-episode television series commissioned following the lives of ActionCOACH clients, it’s set to be another successful 12 months.