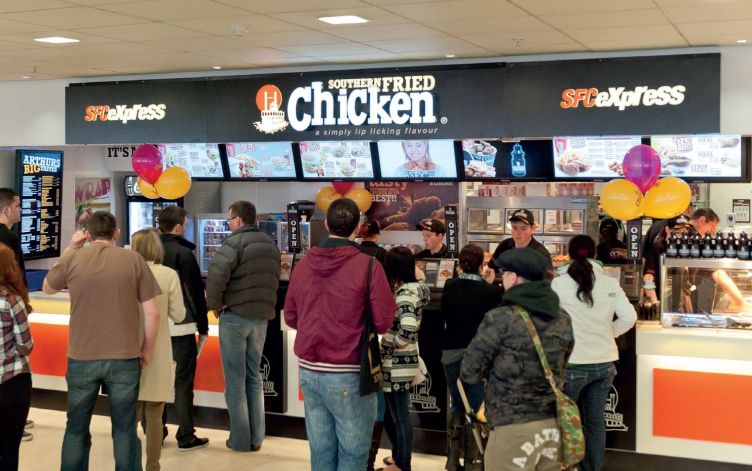 Southern Fried Chicken has evolved over the last four decades into an established brand and business model that is proving attractive to investors on every continent. As the well-loved UK based company embarks on the next phase of expansion, the experienced franchise team is venturing to all parts of the globe – and clocking up thousands of air miles while the brand is flying high.

The last few years have seen dramatic growth in numbers of stylish restaurant concepts that have targeted multi-site development franchise partners seeking a proven profitable business model. It is a simple yet effective partnership between the brand owners FFS Brands Group, and franchisees, which encourages expansion through successful operations and cash generation.

The secret is lower ongoing franchise fees, rather than penalising success with high royalties. This fairly rare approach in modern day franchising terms has generated plenty of interest from organisations looking to diversify into the food market. Typically, 2% of turnover is charged by Southern Fried Chicken, leaving 98% for the licensee to cover usual costs and generate higher margins. When this is linked to realistic initial franchise fees and discounted ongoing contracted supplies of the ‘simply lip licking flavour’ seasonings that customers demand, the result is a winning formula for everyone.

A second brand, AJ’s Piri Piri, is also owned by the Group and is a combination of quick service and casual dining as an option for potential business partner franchisees.

### A real future
Chris Gibson – a franchise veteran who, despite still being the right side of 50, joined FFS Brands Group in 2013 and was appointed president in 2014 – is spearheading the expansion initiative and has already secured new master franchisees for the UAE, Kuwait, Lebanon, Senegal, Jordan, Egypt and the Ivory Coast. Other countries are also at the final stages of agreement with corporate companies for South Africa, Mali, Morocco and Belgium.

With each of these new master franchisees looking to open multilocation restaurants, the expected store growth in these and other new markets is anticipated to add at least a further 200 stores in the next five years to these exciting new markets. All of this is great news for the future – and when the existing network is also set to double in five years, this British brand is set to become a major player globally.

The important message is that the planned expansion is not just a fictional story created for PR purposes or something that sounds nice at conferences and exhibitions; FFS Brands has invested in lengthy research and assessment on the established business, and developed a five-year strategic plan that is totally achievable.

The desire of the FFS Board of directors to develop a real plan is what attracted Chris Gibson to the group in 2013. After heading up franchise brands as a CEO and vice president in The US and UK for nearly 20 years, he saw a huge global potential in the sleeping giant that was Southern Fried Chicken at that point. With the support of the board and newly signed up master franchisees, Gibson is starting to implement the plan and in turn position the business and support team ready for growth.

Part of the acceptance of Southern Fried Chicken as a real investment opportunity for customers is due to its historic success in other countries. Russia, for example, has more than 80 restaurants already, with the pioneer franchisees owning and operating four, five and up to 40 restaurants. One franchisee employs more than 2,500 people and turns over almost $50m, all from that first Southern Fried Chicken restaurant that opened in 2000!

### In the family
The idea to expand through franchising was the brainchild of Andrew Withers, who started working in the family business in the early 1980s. Andrew was part of the initial success in The UK after his parents, Margaret and Arthur, created the Southern Fried Chicken brand and started supplying equipment and seasoning to UK licences. These were all independent businesses, mostly traditional British takeaways that served the ‘simply lip licking flavour’ – with the unique taste that Andrew developed using lemon pepper – alongside fish and chips. The UK public loved it.

Over the rest of the decade, the licences grew to over 500 with a few overseas. It was during a trip to one of these more remote licences that Andrew decided the now famous steamboat logo with the Southern Fried Chicken name was becoming too important simply to give people the right to use it without some control over the quality and representation of the brand. He decided franchising was a more efficient concept, and he persuaded his father that this should be a big part of the brand’s future.

Over the last 25 years the franchise network has grown steadily and the philosophy of helping individuals operate their own restaurant has assisted hundreds of owners from the coldest parts of Siberia to the warm tropics of South America. The family feel to the business was replicated with many franchisees content with the rewards that a single location gave

them; a family business that was actually run by family. Other franchisees decided to develop multisite operations to satisfy their goals. In both cases they were supported to their comfort level and never pushed into having to develop beyond their own aspirations.

Maybe it is because the happy family is now ready to welcome new people to the clan, or perhaps it is because the next generation wants more, but growth is certainly on the menu for Southern Fried Chicken. Cyprus and Malta, original franchisees, are now assisting their sons and daughters in opening new restaurants and building their own empires utilising the same systems that helped their parents 25 years ago.

With a combination of generic growth in proven markets and new growth in developing markets, the next decade is shaping up to make a dramatic contribution to the rich history and pedigree that the company has already created.

It is a far cry from the moment, nearly 50 years ago, when Arthur Withers first tasted a chicken dinner on the banks of the Mississippi and fell in love with the flavour. Arthur’s legacy is now Andrew’s passion, and as chairman and brand ambassador, he is working alongside Chris Gibson to ensure the Southern Fried Chicken name goes from strength to strength

One of the largest home cleaning networks in the world, Merry...

Auntie Anne’s is a global brand that makes pretzels, drinks and...

Chemex International supplies a range of cleaning and hygiene solutions for...