How to improve productivity through nature in the workplace 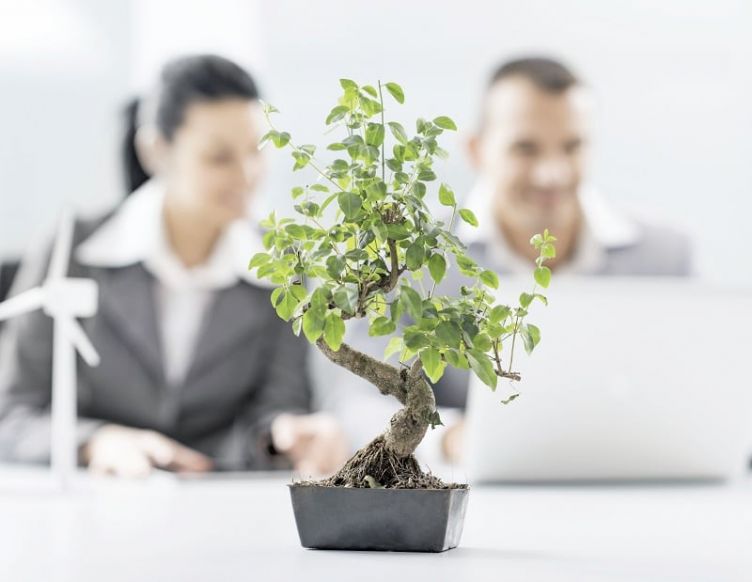 EVIDENCE SUGGESTS BRINGING NATURE INTO THE OFFICE HAS A POSITIVE IMPACT ON PRODUCTIVITY AND WELLBEING. DAVE HOWELL

How green is your office? Until recently, there was a trend to banish the natural world from workplaces in favour of minimalist design. But new research indicates a move back to office environments that embrace the principles of the green building offer a much more productive space, with employee well-being markedly improved.

The benefits of biophilia - maintaining a natural human affinity with nature - were the subject of a recent study that concluded those who spend a significant period of time with live plants reap numerous advantages, including cleaner air, when compared to their faux-plant counterparts. Office greenery is proven to relieve stress and increase productivity, while toxic, air-bound chemicals are transformed into food and energy by plants, making them an essential office accompaniment.

Bill Murray, CEO of SO Group UK, which provides a range of workplace services, says: “Many of us work away from nature in stagnant offices. These environments are unhealthy and don’t benefit us at all. When you introduce plants to the working environment, you reconvene with nature. All of the amazing natural benefits of being in a natural environment, such as cleaner air and relaxation, boost the productivity and engagement of workers and, let’s face it, make offices nicer places to be - especially in summer, when we want to be outside.”

Other benefits include the reduction of carbon dioxide, resulting in less drowsiness, stress reduction, inspired creativity and increased overall health. Rather than rushing to the local park for lunch, busy workers can remain inside and still be surrounded by flowers and plants. Reductions in stress, sickness and absenteeism, as well as creating an aesthetically pleasing working environment, are just some of the perks of adding plants to work spaces.

Murray continues: “We are all highly attuned with nature, so we feel the instant benefits when we bring nature inside. Fresh flowers improve the creativity, productivity, efficiency and moods of workers. The beautiful colours and vibrant smells make workers feel instantly happier. It’s also a great way for visitors to feel welcome and keep the air fresh and clean.

At the Chelsea Flower Show, the Identity Realization Research Group at the University of Exeter, in collaboration with landscaping company Indoor Garden Design, conducted a study that looked at how plants impact the creativity and happiness of people across different office environments. The research concluded that creativity increased by 45 per cent, while productivity rose 38 per cent.

Dr Craig Knight, a psychologist at the University of Exeter, says: “The results from the Chelsea Flower Show experiment indicate that plants, in a well designed and personalised office environment, can boost business effectiveness through improved staff productivity and creativity. This gives company managers an incentive to share control of office space with their staff and create meaningful and more grown-up space.”

In addition, the Human Spaces Report, commissioned by flooring specialist Interface and led by organisational psychologist professor Sir Cary Cooper, revealed employees in Europe, the Middle East and Asia who work in environments with natural elements reported a 13 per cent higher level of well-being and are eight per cent more productive.

The study also revealed that 42 per cent of EMEA office employees have no natural light in their working environment, 55 per cent don’t have access to any greenery in their working environment and seven per cent have no window in their workspace. Spain reported the highest number of office employees with no windows (15 per cent) and also had the most stressed workforce. In contrast, Germany and Denmark reported the least number of workers with no windows (two per cent and three per cent respectively) and had the happiest workforce.

Employers are placing greater focus on the mental well-being of their employees. David Cox, chief medical officer at mindfulness technology company Headspace, says: “In decades gone by the focus was on how to support physical health to support optimal performance in the workplace.

The 21st century perspective looks at how we can support psychological health to support optimal performance in the workplace.”

Felicity Roocke, head of interior design at international architecture and design practice HASSELL, says businesses that want to introduce more greenery into their workspace should know their plants.

“Plants with larger green leaves typically perform better within conditioned internal spaces with less natural light,” she says. “Try and position planting close to windows and if that’s not possible, ensure adequate lighting. Lighting technology has improved and LED technology can be used instead of grow lighting.

“Try and avoid plants of equal heights planted in rows, as planting works best when there is a layering of heights and textures, like in nature. Also, speak to a planting procurement and maintenance specialist to ensure you’re using the correct species and talk to them about ongoing maintenance as well.”

Plants and flowers have also been shown to be highly beneficial in schools, where they boost the concentration levels and engagement of children in classrooms. The calming influence of nature boosts memory, accuracy and attention span, while also making children happier, calmer and more positive.

Nature teaches youngsters compassion, accelerates healing and promotes well-being - and all of these benefits are transferable to school lessons.

There is clear evidence that promoting the principles of biophilia within your workspace can have a profound impact not only on productivity but also well-being, which itself feeds back into higher levels of concentration and creativity. Small business owners should investigate how they can bring nature into their enterprises and reap the rewards from doing so.

Is one type of plant better than another when it comes to promoting well-being and productivity?

Recent research carried out by professor Margaret Burchett at the University of Technology in Sydney suggests some pots of indoor plants are better at scrubbing the air, decreasing carbon dioxide levels and increasing oxygen levels. These include Zanzibar [Zamioculcas], Peace Lilies [Spathiphyllum], Mother-inlaw’s Tongue [Sansevieria] and Parlour Palm [Rhapis].

What are the key benefits businesses can gain from having plants in their offices?

There is solid evidence some indoor plants scrub pollutants from the air and improve the air quality of buildings. One study, outlined in our latest report, Health, Wellbeing and Productivity in Offices: The Next Chapter for Green Building, was undertaken in the Netherlands and found improvements in air quality - both measured and perceived by employees - and improvements in productivity. Staff processed their work more efficiently and concentration improved, particularly those working at computer terminals, where plants were present.

Is there any evidence to support the view that bringing nature into an office space increases productivity?

Health, Wellbeing and Productivity in Offices: The Next Chapter for Green Building synthesises the research from dozens of reports, including the seminal Heschong Mahone study of office workers, which found people in call centres with window views could process calls up to 12 per cent faster, computer programmers with views spent 15 per cent more time on their primary task, while equivalent workers without views spent 15 per cent more time talking on the phone or to their colleagues.

Jamaica Blue is a coffee brand with a belief in sourcing...

Franchising with Papa John’s is an opportunity to get involved with...

Raring2go! is a home-based magazine and website publishing network that helps...