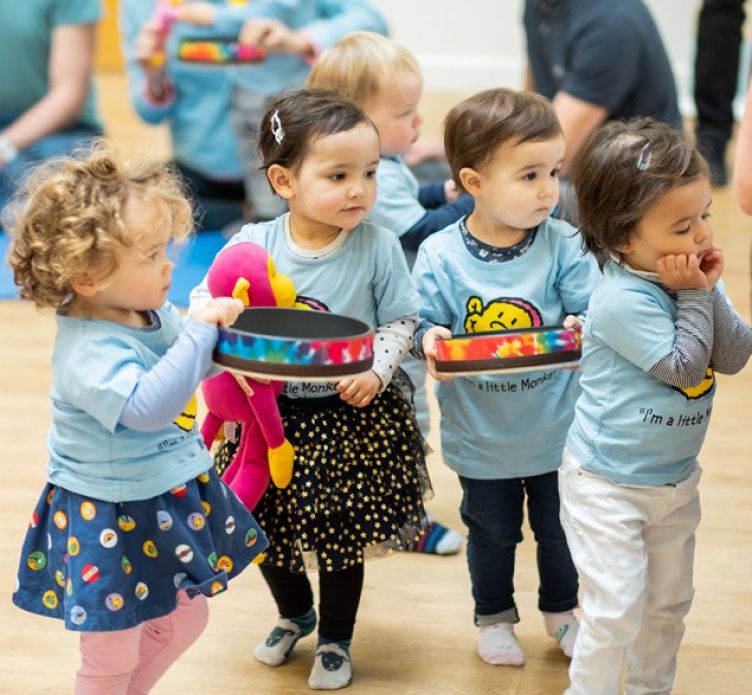 Around 3,000 new babies have already booked to attend Monkey Music classes for the first time

With the autumn term beginning at Monkey Music, there has been a record number of enrolments in its music classes across all age groups, coupled with a significant increase in e-commerce sales for merchandise.

Around 3,000 new babies have already booked to attend Monkey Music classes for the first time, with parents keen to start socialising again after months of isolation. The network of nearly 50 franchises has also increased its re-enrolments of existing customers for the start of term, particularly when compared to the same period in 2019, and seen a rise of 5 per cent in the number of weekly classes running across the UK.

Franchisee, Emma Loyns of Monkey Music Cardiff and Vale & Bridgend has reported substantial growth across her areas in terms of children and classes when compared to the same period last year. “We have seen considerable growth in our two areas over the past year and this is predominantly due to the demand from local families who are now keen to get their little ones back into pre-school activities. This term we will be teaching around 800 children – an increase of over 50 per cent from last year – and this includes both existing and new families who are either re-enrolling or booking for the first time,” says Emma.

New franchisees who launched during the pandemic have also seen a surge in demand for their music classes, particularly now that they are back to venues again. Sally Williamson started her business in March 2020 and has since grown her business exponentially across Aylesbury and High Wycombe.

“My music classes officially opened in venues in September 2020 when the government began to ease restrictions,” says Sally. “By December, I had over 170 families attending 18 classes per week with their babies and toddlers. Fortunately, due to all the hard work and dedication that I put into my business in the previous months, we continued to thrive despite having to move online in the third national lockdown. As we start this new term, we are in a strong position and have doubled the number of children attending our classes in just eight months. We have also increased the number of weekly classes by 133 per cent compared to the same time last year and expanded our team of teachers to four, ensuring we can accommodate all the babies and toddlers across our six venues in Buckinghamshire. I’m really excited about being back to face-to-face classes with our Monkey Music families, sharing precious time with them again.”

Angie Coates, founder and CEO of Monkey Music, adds: “It’s been a challenging time for everyone over the past 18 months - our franchisees, their customers and our head office support team - and we’re all now really excited about starting this new term with a refreshed and positive outlook. Every single one of our franchisees has seen an increase in their enrolments for September, with many having to expand the number of classes to accommodate the demand. We’ve also seen an unprecedented number of new babies signing up for our music classes, which is a reflection on a return to ‘normal life’ following many months of lockdown and isolation.

“Despite the coronavirus pandemic, Monkey Music has continued to play a key part in the wellbeing of pre-school children and their families, providing a safe, supportive and nurturing environment to meet and enjoy interactive musical activities. Young children need social interaction and play opportunities to help them develop socially and this, in turn, will help prepare them for later in life. Monkey Music understands the vital role music is playing in children’s development and the contribution it makes to the wellbeing of so many families.”