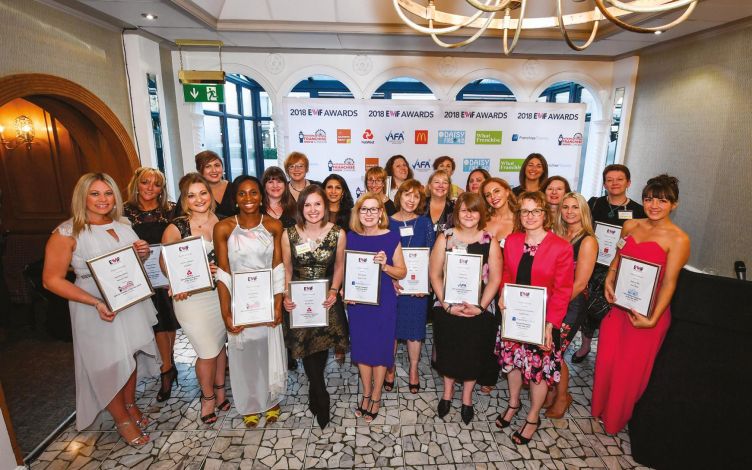 Many EWIF events took place throughout the year to mark the organisation’s 10th anniversary, starting in February with the first ever EWIF Big Breakfast at the International Franchise Show.

The breakfast was a great success, initiating debate around how we can empower more women to take their place in the franchise industry. A fantastic panel of franchisors, franchisees and industry professionals discussed everything from how female franchisee numbers have changed over the years to the existence of the gender pay gap in franchising.

As May came around, it was time for the prestigious EWIF Awards, sponsored by NatWest. A pre-awards reception was held for all the finalists and sponsors the night before the event, which was sponsored by McDonald’s, at Covent Garden’s The Grand Connaught Rooms.

The awards ceremony was as successful as ever, with some worthy winners collecting their accolades, including Ali Beckman from Puddle Ducks, who won the overall woman in franchising award. A special 10th anniversary award was also presented to Louise Harris in recognition of her contribution to franchising.

Louise was one of the speakers at the EWIF conference in September, which was a hive of enthusiasm and entrepreneurial spirit. She was joined through the day by a panel of other award winners, including Jane Maudsley, Hannah Drury and Jo Stone.

The conference keynote speakers were Danni Brooke and Ben Owen from Channel 4’s Hunted. Their stories and inspirational conversational session went down a storm at the Best Western Manor Hotel in Solihull.

EWIF10 Events, a series of regional events held throughout September and October was launched this year. They included an event hosted by Cardiff University business school.

It featured speakers from award winning hairdressing brand and franchisor Toni & Guy, as well as Rachael Flanagan, founder of commercial and domestic cleaning company Mrs Bucket, which has its headquarters in Swansea.

Another event in Manchester attracted donations of smart clothes for women who need the right look for a job interview, but can’t afford them.

All EWIF regions arranged events to raise awareness of the organisation and raise money for chosen charities, both national and local.

You can still be involved in this initiative. The Midlands region has launched an EWIF Virtual 10K for November. Open for anyone to participate in and to raise money for Rosa, a charitable fund set up to support initiatives that benefit women and girls in the UK, you can walk or run the 10K over the course of the month. Once you’ve reached the 10K, you’re rewarded with a medal.

The big news for the future of EWIF is in the change of leadership. After embarking on his goal to see more women in franchising 10 years ago, Clive Sawyer, as CEO, has handed over the baton to franchise marketing company Coconut Creatives, specifically Helen Mansfield, who is now managing director of EWIF.

Here’s to 2019, the exciting new chapter for EWIF and to its mission to encourage more women into franchising.