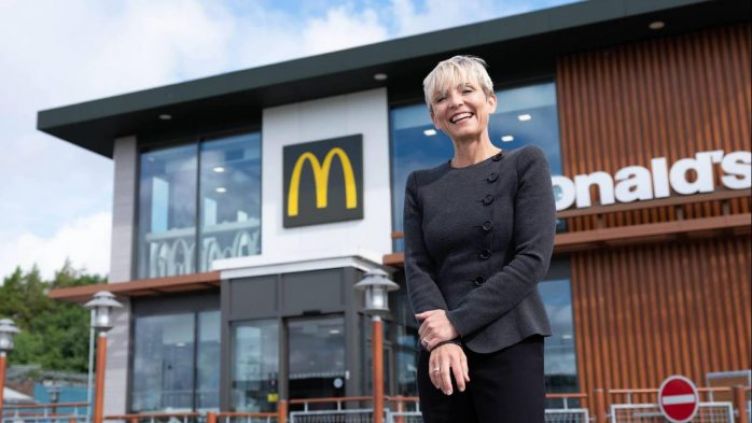 A case of a lack of presence at a franchise show was when Kate Walker and her husband, Kenny, knew McDonald’s was the business for them.

“McDonald’s didn’t need to be there as it gets the right kind of people directly applying,” says Kate. “It doesn’t need your money; it wants your integrity and the skills you bring to the business.

“We liked the fact that it invested so much in training and was focused on getting the right people rather than just accepting everybody that applied.”

The couple first started the application process back in 2002. However, as McDonald’s only works with one named- franchisee, Kate took on the task. “This involved a nine-month training programme, where you engaged with different parts of the franchise, the different departments of the company and other franchisees,” says Kate.

She opened her first restaurant in 2004 in Bellshill, Scotland. Now, 15 years later, Kate has a total of seven under her belt, opening a further unit in Motherwell, Rutherglen, Castlemilk and three in East Kilbride.

A recipe for success

A former marketing executive with Faulds Advertising Agency, Kate brings ample experience of working within a corporation, while her husband is more of a “classic entrepreneur” and has always been self- employed. She explains: “We felt that his entrepreneurial skills coupled with my marketing experience would be suited to starting our own business. We wanted to do something in the consumer field and felt that franchising was a good route to go down rather than starting from scratch.”

Going through and finishing such a rigorous training process also meant that both the franchisee and franchisor knew they were a perfect fit.

What also appealed to the couple was the fact that each restaurant entailed a 20-year agreement to be in place, and banks were more willing to lend when there was the backing of a blue-chip business like McDonald’s attached to the application. This can be a hefty sum as McDonald’s states that to be considered for a franchise, it would need “a minimum of $500,000 of non-borrowed personal resources”. However, in 2018, the 37,855 McDonald’s franchise restaurants generated a total of $86.13bn in sales worldwide, making it a shoo-in for lenders.

“There is a lot of trust involved when you go into a franchise business, but you need to have somebody who is solely looking at it from your point of view, making sure that you’re not doing something that you will come to regret,” advises Kate. “In terms of the financial side, besides getting your own lawyers and accountants to look at the agreement, banks see McDonald’s as one of the best cash-flow businesses.”

For the Walker family, franchising is a true family business – their daughter, Alex, is also involved in the franchise. “Alex has a law degree and looks after our HR function. We are hoping that in the years to come she will be a next-generation franchisee,” adds the proud mother.

In such a high-stakes QSR market, where it is difficult to get a foot in the door, Kate points at this being a way into franchising. “Some women are coming into the business through their family connections and working their way up,” she says. “But there’s more that can be done and I want to help champion women, not only starting their own businesses but also through the franchise model.”

According to a report commissioned by the International Franchise Association (IFA), in 2012, 30.6 per cent of franchise businesses were female-owned compared to 20.5 per cent in 2007.

Kate believes that the female outlook is vital, especially in a consumer-focussed food business. She says: “We have a different perspective. We are also mothers and often the ones making the decision about where our families eat out.

“At the end of the day, I’m a mother that likes to take my kids out and as a parent, I not only want good value but also a family-friendly service. We need to remember that we bring a very different perspective and a huge set of skills to the business.”

Apart from being a successful franchise business owner that employs nearly 700 people between her seven McDonald’s restaurants, Kate has brought her marketing skills to the fast-food franchise. She plays a key role in the marketing and promotions team in the UK, as president of the marketing cooperative.

Kate says that McDonald’s has a “healthy expansion programme” and if the opportunity arises, she would look at opening her eighth restaurant in Scotland.

“Our restaurants are also ‘growing’ themselves,” she says. “We are extending some of our stores to include drive-thrus. We’ve moved into the delivery market, too, so a lot of our restaurants are now working to accommodate delivery drivers while trying to give our in-store customers the experience they deserve.

“There are lots of ways we are evolving as a business.”

Interview by Amanda Peters, staff writer at Global Franchise and What Franchise.