The Drain Doctor franchisee heading for the top 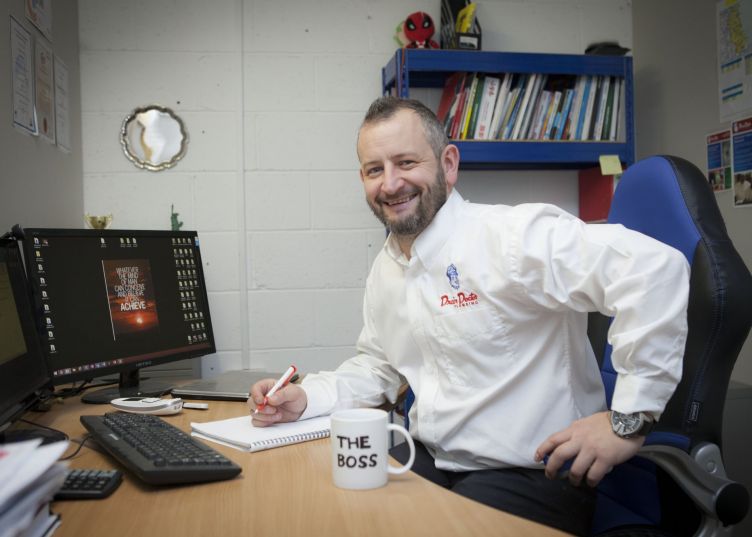 Since taking over the Drain Doctor Newcastle and Sunderland franchise, Jim Watson has made it one of the most successful in the company’s franchise network covering 54 locations nationwide. Tony James reports

Jim Watson’s customers get the red carpet treatment. Arriving on a job, one of the first things his Drain Doctor technicians do is spread out red mats branded with the franchise’s logo to protect the home or business.

“It’s just one small way of showing how much we care about what we do,” Jim says. “I’m absolutely passionate about customer service and doing every job, big or small, to the highest possible standard.”

It’s a philosophy that has certainly paid off for Jim. Since taking over the Drain Doctor Newcastle and Sunderland franchise less than four years ago, he’s made it one of the most successful in the franchise network, quadrupling turnover to an estimated £1.2 million in 2019, and hopes to soon expand over the border into his native Scotland.

The pinnacle of last year’s achievements was winning Drain Doctor’s Franchisee of the Year award, which Jim claims was completely unexpected and was quick to attribute to having the right people on his 15-strong team.

“They are as passionate about customer service as I am,” he says. “Once you have the right people on board, you can then concentrate on getting everyone involved and creating a fun and family atmosphere.”

But Jim’s franchise journey has had its darker moments and he has mixed memories of his reasons for moving from Scotland to Newcastle and starting a business that has proved so successful.

“I was working for Drain Doctor in Glasgow at the time and consequently met someone, which led me to relocate to Newcastle,” Jim says. “Following my move, I then got married and took over Drain Doctor Newcastle. Everything was going so well.”

A year after Jim started the franchise business, he faced some sad and hard times. His wife passed away, leaving him to bring up their son, Jaden, now eight, alone.

“Building a business and bringing up Jaden has been a tough call,” Jim says. “But in other ways developing the franchise has given me something to keep me fully focused and given me a work-life balance, while Jaden is the reason I get up in the morning. I dedicated my Franchisee of the Year award to him.”

An experienced plumber and drainage technician, Jim worked for other drainage companies for 15 years in Glasgow and Newcastle before deciding to go on his own as a franchisee in 2014.

“Drain Doctor has a proven system that off ers a largely recession proof opportunity to be an independent operator running your own business, but with all the back-up that comes with being part of a large organisation,” he says.

“We off er a 24-7-365-days-a-year service with prices agreed before any work is started. We have no callout charge, never charge extra for evenings, weekends or bank holidays and cover all plumbing and drainage emergencies anywhere in the North East.”

“No job is too large or too small,” Jim says. “At the moment, about 60 per cent of our work is domestic, but if the current trend continues the commercial side should soon be up to 50 per cent.”

Drains still get blocked and plumbing leaks regardless of the saga of Brexit and the performance of financial markets and Drain Doctor reports that its current top franchisees are turning over at least £2 million a year and increasing business by up to 40 per cent per year.

Part of the Neighbourly community of service experts network of over 3,000 franchisees running 21 international brands throughout America, the UK and Europe, Drain Doctor has 30 years of franchising experience, over 20 in the UK

Drain Doctor now turns over more than £30 million a year. A franchise costs around £70,000 and includes on-site and off-site marketing and technology training, plus business planning and continued business and technical support.

Jim was a skilled plumber when he arrived at Drain Doctor, but the company stresses that’s not essential.

As it says: “If you already have plumbing or drainage experience, that’s great, but sometimes it’s not as good as somebody who doesn’t know anything.

“We want somebody who is not afraid of hard work, who will lead others and who has plenty of empathy and understanding. This is not a getrich- quick scheme. They have got to want to look after the customer.”

“I absolutely love the job,” Jim says. But he admits that being a lone parent and running a fast growing business has its stresses: “It can be hard, but Jaden is my best friend. He’s a fantastic little boy.

“I’ve put a TV and an Xbox in a room at the office to keep him occupied while I finish work. I want us to spend more time together - in the past, I’ve worked almost round the clock - and my plan is to be less hands-on and work on the business rather than in it.”

Jim recently had the chance to help keep another family together when his Drain Doctor team donated their services to adapt a home in North Shields for the prime-time BBC programme DIY SOS, which helps homeowners improve their property to cope with dramatically changed circumstances.

In fact, Drain Doctor has helped with other DIY SOS big builds in East Anglia, York and Birmingham.

The latest project, fronted by presenter Nick Knowles, involved Drain Doctor carrying out a CCTV survey before installing drains and manholes for a new extension to the property.

“It was fantastic and very humbling to have played a part in the building project and I can’t thank my technicians Dan, Craig and Ian enough for the hard work they put in over three days,” Jim says.

“It was incredible to see the North East coming out in force to make it possible to keep a family together and to have a hand in making it work. But then, helping people out is what Drain Doctor is all about.”