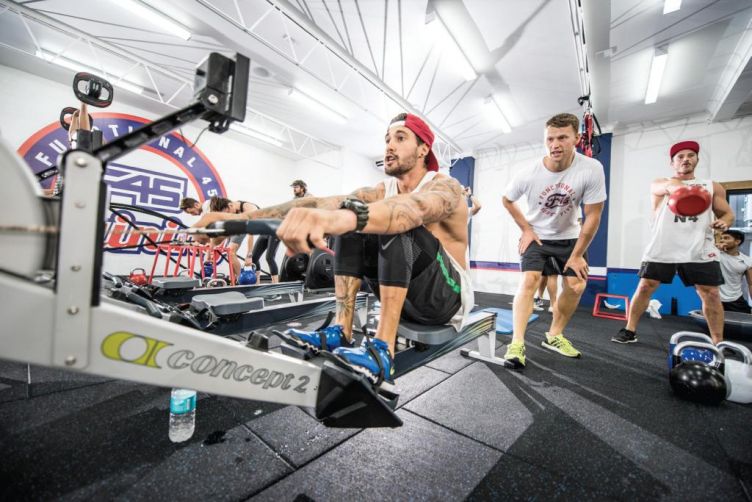 She was envied and admired by millions, but Jocette Coote wasn’t a waif-like superstar model.

From Australia’s sun drenched Bondi Beach, she remembers: “I wasn’t a naturally skinny girl. I was fit, healthy and determined to look after my body and look my best.

“Nearly two decades later, that’s still my motivation and now I’m helping - and hopefully inspiring - other people to do the same.”

She’s certainly doing that. Now in her early 40s, the glamorous and dynamic mum of three combines being a top international model with spearheading the UK launch of fast growing fitness franchise F45 Training.

“We never expected to grow so fast and the momentum to be so great,” Jocette says, who plans to open two more London gyms - in Battersea and Ravenscourt Park - in the next six months.

First franchised four years ago in Australia by former equities trader Rob Deutsch, F45 - short for Functional F45 - was the result of spotting a gap in the health and fitness market.

Rob says: “People were turning up to normal commercial gyms with very little innovation and results. They turn up on average once a month and that’s really bad in terms of how much usage they get out of it.

“One day you train like an American quarterback and perhaps the next day you train like a surfer,” Rob says. “We are the Apple store of the health and fitness scene.” He soon found he was riding a winner. Today, F45 is claimed to be the world’s fourth fastest growing franchise with over 820 gym studios in 22 countries and a target of 1,200 by the end of the year. The 50 franchises sold in the UK should soon be coming on stream.

“Our success is a very good indicator that people in the UK are becoming more concerned about looking after their fitness and health,” Jocette says. “It’s interesting that 80 per cent of our clients are women.”

At first sight, the regimes are not for the faint-hearted, but Jocette points out that all exercises are adapted to clients and are made less intimidating for women: “We always say you don’t have to be super fit or a professional athlete to benefit from a F45 workout.”

She says there’s always a dramatic influx of new members when the gym announces what it calls an eightweek challenge - a fitness programme involving diet, detoxing, exercise and getting the body ready to build muscle.

Jocette explains: “The target is to look good in eight weeks’ time - and they invariably do.”

Serendipity had a lot to do with Jocette’s involvement with F45, as indeed it seems to have done with most of her life. When husband Andy retired from rugby, he became a financial trader, met Rob in banking and they became friends.

“Andy has a very good background in fitness and when we moved to the UK, taking up some F45 franchises seemed a great idea,” Jocette says.

She had plans to be a professional classical oboist, when a man took some photographs of her while walking down a mall in Bondi Junction and asked if she had ever thought of becoming a model.

The man was a scout from an agency that had fashion icons like Kate Moss on its books and within weeks Jocette was modelling in Japan and making more money in a month than she could hope to make from music in a year.

“I loved music, but I felt this was an opportunity I couldn’t turn down,” Jocette explains. “Being a concert oboist simply didn’t pay the bills and the transition from struggling musician to model was amazing.

“To all of a sudden be in the spotlight and covered in finery really shocked me. It shows the power of the industry to literally pick someone off the street and change their lives forever.

“I’ve been lucky to keep modelling for nearly two decades. I think the industry these days is a lot tougher and you have to be made of steel to keep going.

“When I started, models weren’t celebrities but it was, and is, a great job. It keeps you fit and healthy and you have to be the best version of yourself that you possibly can.”

Today, Jocette has one of the world’s most recognisable faces. She has appeared countless times in the fashion bibles Vogue, Harper’s and Marie Claire, been the image of iconic brands like Shiseido, Max Factor and Pantene and the international face of Nivea for eight years.

Looking back, she says modelling has given her a strong appreciation of fitness and she has found confidence in feeling fit rather than just beautiful: “I wanted to share this with other women and help them look and feel their best. Teaming up with F45 seemed a good way to do it.”

After years of “living out of a suitcase”, Jocette decided it was time to settle down. She met and married Andy, moved to London and started a family.

“Having worked with some of the world’s best fitness experts, I know F45’s service and results outstrip much more expensive personal training and believe that the franchise will explode in the UK, just it has done elsewhere,” she says.

A F45 franchise costs £200,000- £250,000, with minimum capital of £125,000 and includes premium quality fitness equipment, maximum returns on membership numbers and a tried and tested formula.

Rob believes it’s all about loving health and fitness, but keeping things balanced and fun. If that includes enjoying the odd glass of wine at weekends, so be it.