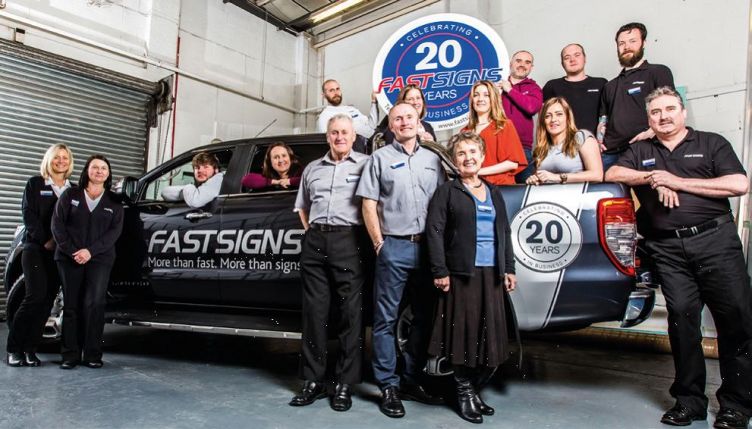 FASTSIGNS Leeds was established in 1995 by father and son team, Chris and Andy Simpson. Franchising allowed them to build a business that provided careers for them both in the ever evolving signs and graphics industry.

Having been in business for over 24 years, Chris and Andy have developed their business to be one of the top performing centres in the FASTSIGNS UK network.

They have worked side by side to build a successful family business that not only provides roles for themselves, but also for 14 other colleagues, who live locally to their centre.

Following redundancy in the midnineties, Chris came across the FASTSIGNS franchise. Recognising the opportunity, Andy decided to join his father.

“I was 25 when Chris discovered FASTSIGNS,” Andy explains.

“I thought it would be a fantastic way for me to become a business owner. An opportunity that I also recognise probably wouldn’t have come along had he not looked into franchising.”

When they first started working together, Chris and Andy needed to sort out how they would split the responsibilities and operate as business partners, as well as father and son.

They run different areas of the business: Andy concentrates on the creative aspect and looking after staff, while Chris manages the financial side.

“When making strategic decisions for the business, we work together,” Chris says. “We’ve settled into our roles comfortably and have learned the best way to tackle issues as a team to do what is best for our business.”

During their 24 years in business, the FASTSIGNS Leeds team have developed a customer focused approach and contributed considerably to the signage in their centre’s surrounding areas. An example of their work can be found at Leeds train station, where they have worked on over 75 signage projects. These range from the practical signs to direct users of the station to displays that show off their creative flair.

Ahead of the curve

Chris and Andy believe the franchising aspect of their business has helped them stay ahead of the technology curve in the signs and graphics industry.

“In the early days, signs were hand cut and made from layered vinyl,” Andy says. “As time has progressed and technology has advanced, so too have our capabilities.

“FASTSIGNS, as a franchisor, tests equipment, substrates and methodology. They then advise on how to implement these into our business, helping us to stay competitive and consistently skilled.”

Last summer, three generations worked side by side in the centre when Andy’s son spent time working in the business.

“There was a moment when Jack and I were carrying out a survey for a signage installation and I asked him to write down the measurements,” Andy says.

“Being of the next generation, his response was: ‘No, I’ll type them into my phone and email them to you.’ He’s teaching me, as much as we’re teaching him.

This is the beauty of running a family business.”

At a glance fastsigns

Number of franchised outlets: Over 700 worldwide - 22 in the UK