My franchise story: From redundancy to The Zip Yard 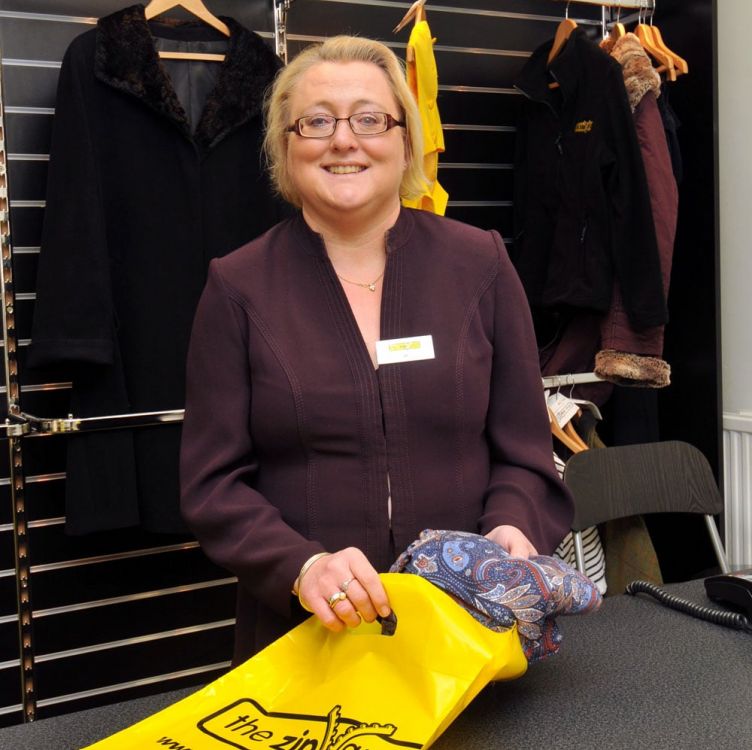 However, in under 12 months, she became the proud owner of The Zip Yard in Basingstoke and admits it was probably the best thing that ever happened to her.

Jill Phillips lived in Hannover Germany from the age of 14 for over 20 years with her father, an Ex-RAF serviceman, and German mother.  In 2006 after both parents passed away and Jill was working as a Business Manager for the Salvation Army, she made the decision to move back to the UK. It was then that she met her husband-to-be Gerald (55) and became a Credit Analyst in the UK offices of a major US corporation based in Basingstoke.

After five years with the company and by then a Team Leader Jill was informed that she was to be made redundant.

“I was really cross when I found out I’d been made redundant.  I thought it was a job for life and I didn’t know what to do with myself.”

Jill ‘ran away’ back to Germany for a couple of weeks visiting friends, and spent time ‘mulling things over’ on her return.

“I watched This Morning every day and couldn’t really muster up much enthusiasm to do anything, then Christmas came and I thought ‘Right, you’ve got to get yourself going girl’.”

How did you hear about The Zip Yard?

One day Jill’s husband Gerald returned home from a trip to the doctors clutching an advertisement he’d seen in a magazine in the waiting room, all about The Zip Yard.  He was very excited about it but Jill admits her initial reaction was ‘But Gerald I don’t even sew!’

Had you considered running your own business before?

“I wanted to be my own boss, manage my own time and benefit from my own efforts but I wasn’t sure doing what.”

Jill agreed to contact Nigel Toplis, franchisor of The Zip Yard, to get a bit more information but still felt she needed a bit more time to think it over.  Nigel suggested she pay a visit to Richard McConnell, owner of the Zip Yard in Altrincham.

“Gerald and I went to stay in Altrincham for a Valentine’s weekend break and visited Richard’s centre.  We were very excited by what we saw and I felt I could manage this kind of business. That was in February and after that it all happened very quickly, finding premises, training, hiring staff and doing all the legal stuff.”

When did you launch?

“We opened on Monday 21 May 2012. I was nervous but quietly confident.  It’s scary setting up any business but in the current climate it’s particularly difficult.”

How is it going?

“I’m really happy. I’m in the right place.  Our sales figures are good and the feedback from local people is so encouraging.  People come into the centre and say to me ‘This is just what Basingstoke needs.  Thanks for opening here.’ “

Has the franchisor been supportive?

“Yes the whole team has been fantastic.  From the training, which was very hands-on, to the huge level of support I’ve had, it’s all been great. Although it’s my business and the buck stops with me, I’ve never felt alone or out on a limb. It’s been teamwork from day one.”

What are your plans for the future of the business?

“Once this business has been up and running for a while I’d love to branch out with another one somewhere else.  For now, I’m happy just focusing my efforts on Basingstoke and making a success of it. I’ve just taken on another seamstress so the business is growing already.”

Would you recommend The Zip Yard to other potential franchisees?

“Most definitely.  I’m learning all the time and it’s such a sociable business.  I really enjoy talking to the customers and I get such a feeling of satisfaction from seeing how happy they are when their clothes fit properly.”

Any advice to offer other women thinking of setting up a franchise?

“As a woman I can recommend the business.  All I’d say is you have to want to succeed and know what your own capabilities are.”

Start your own The Zip Yard franchise

Send a free enquiry to The Zip Yard for further information!