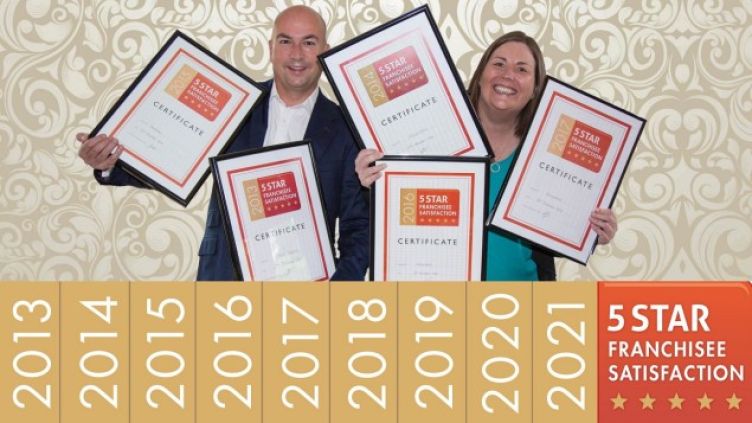 When choosing a franchise, you might want to reflect on the views of people who have already invested in the franchise before looking at anything else. There’s an exclusive club of franchises that have been rated five-star for franchisee satisfaction every year from 2013 to 2020 – making ActionCOACH one of a very small select group of franchises to achieve this alongside Puddle Ducks, Right at Home and TaxAssist.

The latest results are out from WorkBuzz, that have been collecting impartial and anonymous responses from franchisees across 100 franchise brands for its annual Franchisee Satisfaction Benchmark Survey. For a ninth successive year, ActionCOACH franchise partners have rated their franchise above average in every category from rewards to support in WorkBuzz’s anonymous survey of ActionCOACH’s 200-plus UK franchise partners.

ActionCOACH’s culture of teamwork was demonstrated once again as franchise partners rated it 94 per cent for peer support. Together with this, ActionCOACH received a 95 per cent score on its products and services, demonstrating the variety of choices for business owners to engage with the brand, from the low-level cost of a monthly BusinessCLUB to ActionCOACH’s leading one-to-one support offering guaranteed growth to UK business owners.

Ian Christelow, chairman at ActionCOACH UK, said: “I feel honoured to be part of a company with such an amazing community of franchise partners. To win the prestigious 5-Star Franchisee Satisfaction Award as a result of our team’s incredible ratings and comments makes everything we strive to achieve thoroughly worthwhile. ActionCOACH is a referral-based business and assembling a team of delighted franchise partners is at the centre of everything we do.”

Julie Wagstaff, managing director at ActionCOACH UK, added: “We’re delighted to be one of the first franchises to be able to announce the 5-Star status for nine years in a row! The last 18 months have created a challenging business environment where our franchise partners are perfectly placed to support their local business communities. Having gone the extra mile to give them the support and tools to reach as many business owners as possible, we’re pleased to see our culture of support and success paying off in those communities around the UK. We always take the responses to this survey seriously, repeatedly striving to make our franchise even better for our franchise partners.”

Steven Frost, CEO, WorkBuzz, which organises the survey, said: “With hundreds of franchisors all shouting about the quality of their support and franchise system, it’s difficult for prospective franchisees to determine what are the very best franchise opportunities. 5-Star Franchisee Satisfaction improves transparency across the industry and helps outstanding franchisors like the ones we’ve objectively recognised, stand out from the crowd. It will help prospective franchisees to make better-informed investment decisions.”