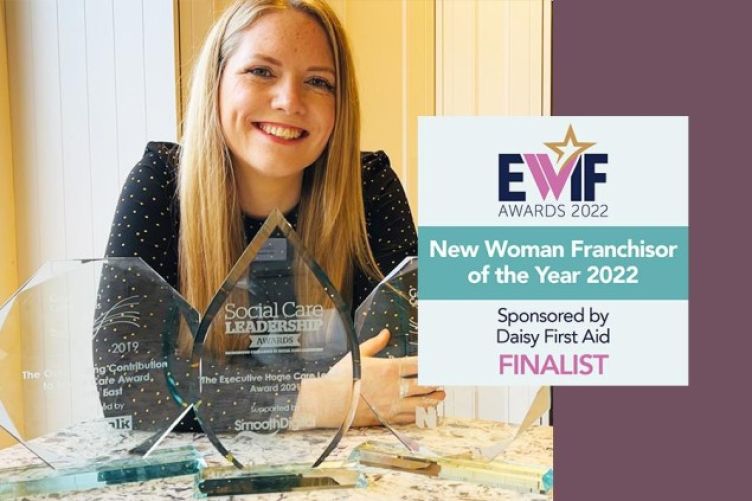 Fiona Leggott, co-founder of Blossom Home Care, is through to the finals of the NatWest EWIF Awards – designed to encourage women in franchising – and has a serious chance of being crowned New Woman Franchisor Of The Year 2022.

Her achievement is all the more remarkable because there are more entries this year than ever before and the judges say the standard is the highest in the 12 years the awards have been running.

“I’m absolutely thrilled to have got this far,” says Fiona. “The EWIF Awards are the ones everyone wants to win because they celebrate the part women play in franchising and encourage others to really go for it. And it’s an honour to be recognised for my leadership and the work I do with our franchisees at Blossom Home Care.”

Fiona, a registered nurse, co-founded Blossom Home Care with her husband, John, after becoming frustrated with the lack of decent care-at-home she saw around her.

They set up the sort of homecare service they thought there ought to be, introducing home-care visits of a minimum of 50 minutes, paying carers substantially more and putting the person needing care at the centre of everything.

“A lot of people had care ‘done to them’ in those days, with little say in what went on, but we’ve changed all that and fit our service around their individual needs and aspirations,” she says. “It’s been so successful that we’ve franchised it and have offices spreading across the UK, owned and run by franchisees who share our values and believe in making a difference.”

The thriving network has proven so successful that one franchisee reached break-even in her first month – an extraordinary feat in the world of franchising – and others are already planning to expand by opening more offices or taking on additional territories.

Fiona is no stranger to awards, having won a string of them for her leadership, her inspiration, and the support and encouragement she gives to franchisees.

The EWIF Awards winners will be announced at a glittering ceremony in London on 30 June.