Bridgewater Home Care is on to the EWIF awards finals 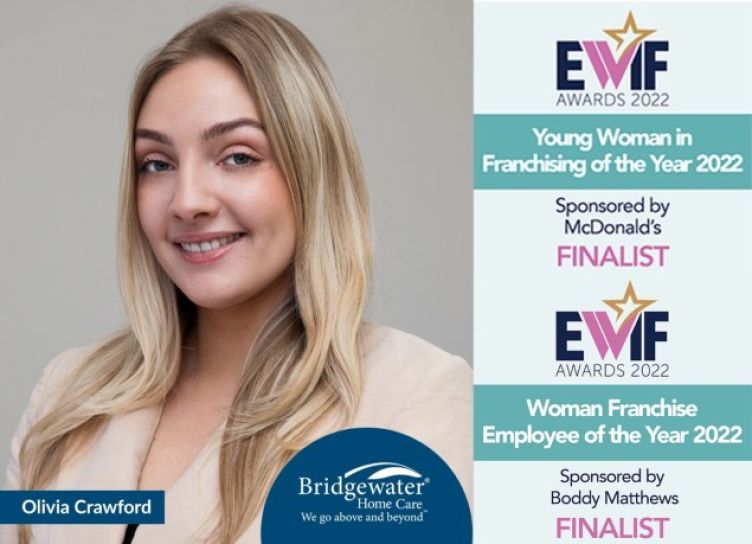 With a mission to educate, inspire and empower more women into franchising, Encouraging Women Into Franchising (EWIF) has just announced its 2022 finalists, including two nominations for Bridgewater Home Care!

The annual awards ceremony celebrates the achievements of women across the franchising industry. Olivia Crawford, Bridgewater Home Care’s marketing and franchise development manager, who joined in December 2020, has been announced as a finalist in two categories for the NatWest EWIF Awards – Woman Franchise Employee of the Year and Young Woman in Franchising of the Year.

Announcing the news, EWIF states: “This year we had record numbers of entries and the standard was the highest in the 12 years of the EWIF Awards, so well done on getting through to the final.”

2022 is looking to be another exciting year for Olivia who, at the age of 26, joined Bridgewater Home Care as franchise development manager with no prior experience in the home care or franchise sectors and has already made a huge impact on the success of the franchise business.

Olivia was thrilled and very honoured to be shortlisted. She says: “Firstly, I would like to congratulate everyone who has been shortlisted for such prestigious awards. Thank you so much to the EWIF for the recognition of what I have achieved to date.

“After leaving a career in finance and joining the home care sector in 2020, I was so humbled by the strength and teamwork shown by the management team of Bridgewater Home Care and the dedication of the care team in providing continuity of care to our home care clients and delivering a vital care service in our communities.”

Having joined such a dynamic and ambitious franchise, Olivia felt inspired to see where she could take the franchise model. She adds: “Bridgewater Home Care takes pride in being able to give back to the communities that we serve. I developed the idea of adapting the franchise model to create a ‘franchise for franchisees’ where the focus would be on adding value for the franchise owner, providing efficient processes and systems and creating the best resources possible to facilitate a good work-life balance.”

Leading the development of the franchise, Olivia aims to recruit six new franchise partners by the end of 2022 and a further 10 in 2023, offering a total of 200 territories available for purchase in the UK.

Here is a full list of the EWIF finalists. The winners of the EWIF 2022 Awards will be announced at a prestigious awards ceremony in central London on Thursday, 30 June 2022.