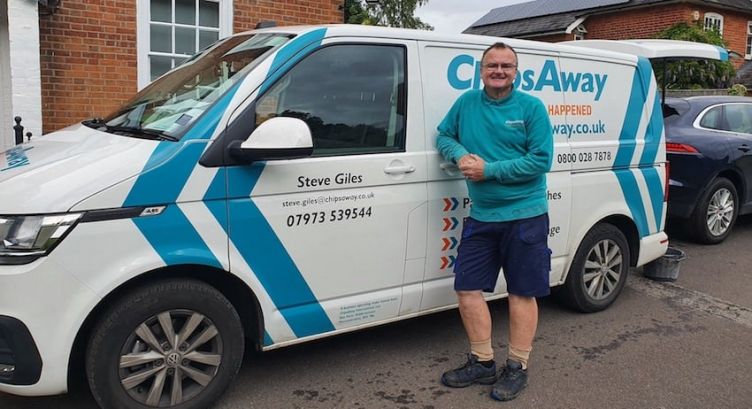 Steve Giles: “Having to step away from the business for eight weeks because of the coronavirus pandemic made me even more keen to continue working”

One of ChipsAway’s first UK franchisees has renewed his franchise agreement with the SMART car bodywork repair specialist following 25 years with the business.

Steve Giles opened his mobile franchise, which covers the Farnham, Camberley and Fleet areas, one year after the brand was established in 1994. Following a quarter of a century, he’s committed to another five years with ChipsAway.

Despite having to close his doors during lockdown - which he says is the most unpredictable challenge of his franchise career so far - Steve, 58, remains confident about future trading conditions and cites increased support and training from parent company Franchise Brands as being integral to his future growth.

He says: “After being made redundant from a previous job as a welder and fabricator, I attended an employment fair and came across ChipsAway.

“It was relatively new then, but the main attraction was being able to work with my hands, work outdoors and be my own boss.

“Back then you were very much a sole trader. There was a minimal amount of advice from head office on how to build your business and you had to go it alone.

“Since Franchise Brands took over in 2008, myself and other team members have received huge amounts of training and support in terms of finance and marketing and that has made me even more confident about renewing.”

And though his five-year renewal will take him close to retirement age, Steve has such passion for the business that he struggles to envisage a time he won’t be involved in it.

“Having to step away from the business for eight weeks because of the coronavirus pandemic made me even more keen to continue working,” Steve says.

“I’ve built a strong team and over the years have expanded my footprint to cover a sizeable area of the region, so even when I reach retirement age I won’t step back fully.

“The vision now is to spend the next five years developing the skills of my team, Ryan and Graham, so that when the time comes I can do less of the physical, day-to-day delivery of bodywork repairs. But I’ll always keep one foot in the door.

“Running a franchise is about hard work and living and breathing what you do and sell. You need to be passionate about it, be fully committed and when it’s an outdoor job, like ChipsAway, be prepared for all weathers.

“I’ve got a kettle and a good set of gloves in my van, which always come in handy!”

ChipsAway managing director Tim Harris says: “We’re incredibly happy that Steve has decided to stay with us for another five years.

“His experience, knowledge and skills in car bodywork and repairs are invaluable to his customers and his commitment makes him a role model for those who are considering a career in franchising.

“Steve still loves what he does every day and that’s what it takes to make a franchise business a success. We know that he will continue delivering an outstanding level of service for the next five years and beyond.”