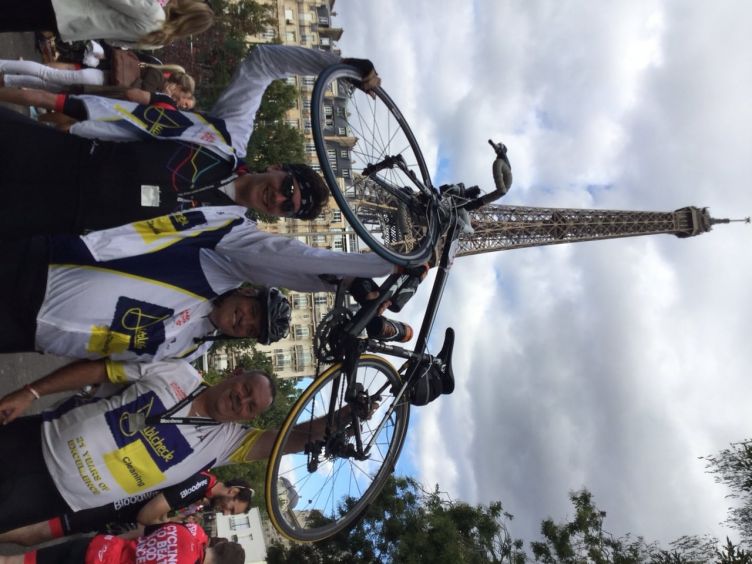 After 4 days and 500 gruelling kilometres the team finally reached
Paris to be met by a rousing reception including seven staff from
Dublcheck head office including the founder and chairman Carol Stewart.

Team Dublcheck have been sponsored for the last twelve months on every
one of their training and competitive rides, all of which built up to
this mamouth achievement in support of such a worthwhile cause. Chris
Dabbs of Team Dublcheck said “we could never have achieved this
amazing target without the support and commitment of Dublcheck, in
particular Carol and Ann at head office, along with the backing of all
their other amazing staff and franchisees”.

He went on to describe the journey saying “The ride started on a cold,
wet September morning in Greenwich Park but as soon as we started to
roll out the park the sun shone and we were off to a flying start.
After a long, and often tough day, riding through kent, we finally
reached the channel tunnel and day was over”.

“Day 2 saw us ride an even harder day from Calais to Abbeville. The
terrain was just as demanding as the first day but was so much tougher
given the torrential rain and head winds we faced for all but a few
miles. Punctures were common place and a hot drink and dry clothes the
aim of every one of us by the end of a nine hour day!”

“Day 3 was an different affair completely. Sunshine and rolling
terrain made us believe we could actually make it all the way to Paris”.

“The final Day dawned with much anticipation amongst the riders. Only
65 miles to the Eiffel Tower and the ride was complete. With
motorcycle outriders closing roads and junctions ahead of us we swept
onto the Peripherique and back off as we approached the
Champs-Elysees. Riding around the Arc de Triomphe we swung over the
Seine to finish in the shadow of the Eiffel Tower”.

Thanks to the efforts of all involved Bloodwise will benefit from
£1000s in sponsorship and donations. For more information on the ride, pictures and videos
visit TeamDublcheck.com and for information the franchise visit
Dublcheck.co.uk