Is Wetherspoons a franchise in the UK? 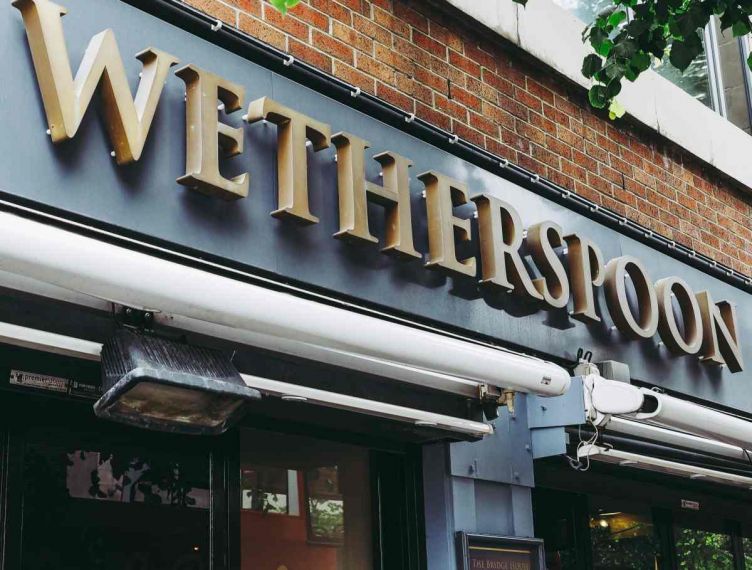 Are you wondering is Wetherspoons a franchise in the United Kingdom? If yes, you should read our guide here on what you need to know

Spend more than a few minutes talking about pubs to a Briton and Wetherspoons will come up in conversation. While some loathe it, it’s unquestionably one of the nation’s institutions. A favourite among students, workers, and those looking for a good breakfast, the chain is a huge success that’s continuously expanding, with the largest Wetherspoons in the country opening in Ramsgate in 2017.

If you’re interested in investing in Wetherspoons, there’s one key question: is Wetherspoons a franchise? If it is, how can you get involved? If it isn’t, what alternative franchises can you invest in?

We’re experts in helping entrepreneurs start franchises and we’ve to all the answers that you need. In this article, we’ll take a look at what makes Wetherspoons a success, how you can get involved, and what other opportunities are awaiting your investment.

A brief history of Wetherspoons
Wetherspoons has been around since 1979, a lot longer than some readers may think. The first pub opened in Muswell Hill, North London, on the 9th December. When this pub became successful, more pubs began opening in North London in the early 1980s, with head office above The Dog pub in Archway.

Wetherspoons continued to innovate, hosting its first real-ale festival in 1990, long before the real ale boom of the 2000s. Other forward-thinking ideas included a non-smoking bar at The Tally Ho in Finchley, opened in 1991. That same year, the pub began putting a laser focus on three things: cleanliness, beer, and high-quality service.

In 1992, travellers were first able to get a quick pint before their flight, with the first airport Wetherspoons opening at Heathrow Airport. The following year, Wetherspoons began opening pubs outside London, in Norwich and Bracknell. Jump forward to 1996 and the first Wetherspoons in Wales and Scotland opened their doors to customers.

In 2000, the first Wetherspoons in Northern Ireland opened and it was named Pub Company of the Year.

In 2006, Wi-Fi became available in all Wetherspoons pubs, leading the way for other pubs to follow suit. The following year, a couple got married in The Knights Templar in Chancery Lane, which is still a popular wedding venue today.

Today, there are pubs in all four countries of the United Kingdom, as well as the Republic of Ireland.

What makes Wetherspoons popular?
Wetherspoons is a veritable giant of the pub world. It seems impossible to go to any town across the country and not find one.

How many Wetherspoons are in the UK? There are over 800 different Wetherspoons locations across the United Kingdom, with many larger towns and cities having more than one to call their own. What is it that makes Wetherspoons so popular?

Low prices
Wetherspoons offer consistently low prices across all of their pubs. A pint of beer can cost less than £2, compared to a London average of £5.19. Food is also cheap, with the menu often featuring two meals for £10.

Quality and variety do not suffer for this low price, though. Wetherspoons varies its menu and beer selection across the country, which means that you’re always able to try various regional foods without paying a high premium.

Quality service
Wetherspoons features a very high quality of service. If there’s a queue at the bar, for instance, you can order your food and drinks on the app and have them brought to your table. This means that however crowded the bar is, you’ll still get served quickly.

The free wi-fi is another element of Wetherspoons’ fantastic service. Across all of its pubs, you can use the wi-fi to check emails, chat online, and even get some work done.

Quirkiness and traditionalism
Despite being a chain, Wetherspoons pubs are not cookie-cutter identical. They all refer to and preserve the character of what the building used to be. An example of this would be The Banker’s Draft in Sheffield: formally a grand bank, the architecture has been preserved by the pub.

There’s also a playful side: every Wetherspoons features a different carpet design.

Sadly, despite Wetherspoons’ massive success, there are no franchise opportunities currently available to investors. Instead, if you want to get involved with Wetherspoons, you need to start working for them. The problem with this is that Wetherspoons does not typically employ pub managers from outside the company.

The company’s ethos is that current staff know it better than anyone and thus are best equipped to work as managers. We’re here to talk about investments, not working your way up from being a barman or cook to running a pub. So what other alternatives are there for you?

Wetherspoons alternatives: Veeno
One possible alternative to being a franchisee for Wetherspoons is to become a franchisee for The Veeno Company. First opened in 2013, this Italian-style chain of bars focuses on wine, rather than beer. The cafe chain focuses on bringing the Italian concept of aperitivo, that is, good food and good wine, to the UK.

At present, there are seven locations across the UK, employing more than 80 people. The goal of the company is to become one of the leading wine companies in the UK, giving Britons a place to relax and enjoy Italian-style ambience.

Wine drinking is growing in popularity in the UK, formerly considered a nation of staunch beer drinkers. It is the favoured drink for 60 per cent of adults according to recent surveys. It is important to note that wine drinkers are not served well by traditional pubs, so there is a large gap in the market for a boutique chain of wine bars.

If you are interested in becoming a franchisee for The Veeno Company, the good news is that minimum investment is rather low, starting at £75,000. Larger investments are also possible if you would prefer to be the sole owner and get better returns on your investment.

Start your own Veeno franchise

Send a free enquiry to Veeno for further information!

Wetherspoons alternative: Coyote Ugly
If the idea of running an Italian-style wine bar does not appeal to you, how about running an American-style bar and saloon? Coyote Ugly was established in 1992 and has featured on film and television.

Despite originating in New York City, the bar chain is branching out to selected international locations. It’s Americana but without being cliche, allowing for owners to adapt elements of their bar to local cultures. The company also provides full training to new managers, owners and other staff.

The chain is poised to begin expanding aggressively around the world in the coming years. Getting in on the ground floor could give the franchisee some strong advantages.

Coyote Ugly is a more expensive option than The Veeno Company, as you might expect given its higher profile. Costs begin at £315,000, rising to £790,000. The final price depends on whether you are interested in opening one store or several.

Franchise fees are set at £39,500 for single locations and £79,000 for multiple locations. American-style bars and restaurants are currently growing in popularity in the UK, so it’s likely that British Coyote Ugly locations would also prove popular with punters. If you are interested in a franchise with a twist, Coyote Ugly is well worth a look.

Wetherspoons alternative: Slim Chickens
If the casual dining aspect of Wetherspoons is what draws you to the brand, consider Slim Chickens. This casual dining brand attempts to take the takeaway staple of fried chicken and make it better. At present, there are six stores across the UK and Ireland with all of them proving successful.

When you sign up with Slim Chickens, you need to agree to open five stores in four years. While this may sound like a daunting task, the in-house support team will be there to help you every step of the way. They can even help you find suitable sites.

The in-house support team will also help to support you in opening your restaurants, giving you training in what working at Slim Chickens is like. For your first two locations, they will also give your management teams four weeks of training. You will need to sign a 10-year agreement with the company.

Franchise fees for Slim Chickens start at £750,000. Franchise fees are £50,000 for the first five stores and £17,000 per store for each store opening. If you’re interested in helping a new high street casual dining chain grow, while making a healthy profit, they are a very interesting prospect.

How we can help you
When you started this article, you had one question: is Wetherspoons a franchise? While the answer is no, there are a whole host of similar companies out there that need your investment. We’ve given you some examples, but there are a lot more franchises in the hospitality industry available to you.

For more information, take a look at our franchise directory. If you’ve got any questions about becoming a franchisee, please read our FAQs section!