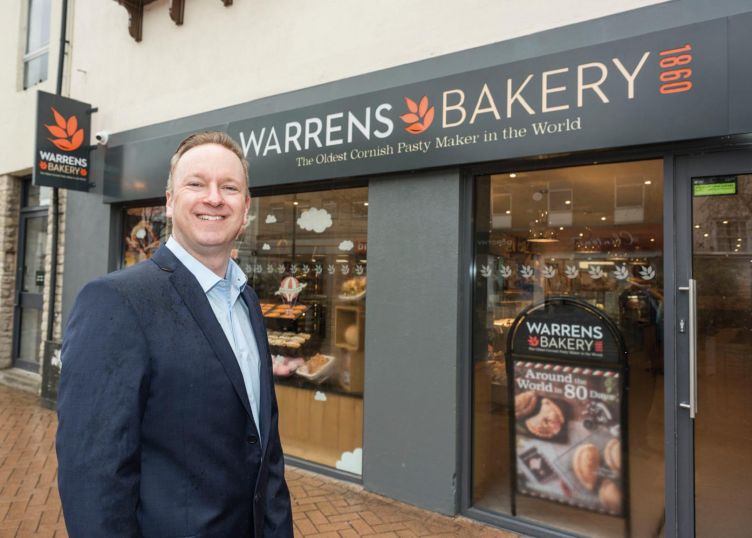 Every issue we look at the rise of a successful UK franchise, so you can learn from all aspects of its development. This time we take a look inside Warrens Bakery

There are presumably not a lot of tin and copper miners around north east Oxfordshire nowadays, but that didn’t stop Robert Crompton selling nearly 2,500 Cornish pasties during his Bicester Warrens Bakery store’s first week of trading and welcoming 500 customers through the doors on the first day.

Trendy snacks and takeaways may come and go, but the original portable meal of Cornish miners and farm workers has been around since the 13th century. And with the current rise in popularity of craft baking, the traditional Cornish pasty is enjoying a resurgence as the ultimate all in one meal.

Looking for something different

As a shrewd businessman whose other interests include a shop fitting company, Robert was looking to invest in a franchise that was “something different” when he chanced upon Cornwallbased Warrens Bakery, the oldest Cornish Pasty maker in the world, and liked what he saw.

Robert says: “It has a robust business model, award winning products and a reputation for using the finest ingredients and the best traditional methods. I also like Cornish pasties.”

As a result, Robert now has two Warrens Bakery franchises - his Bicester store opened in March 2018, followed by one in Towcester eight months later. More than 1,000 Cornish speciality foods were sold from the Towcester store in the first week of business.

Since then, the growing demand has caused Robert to launch a van service in the Bicester area, increase his staff to 20 and plan to open another Warrens Bakery franchise later this year.

A gap in the market

Cornwall’s oldest commercial bakery now has over 70 stores across the UK providing traditional bakes, sandwiches, scones, artisan bread and handcrafted Cornish pasties, which range from the ever popular Traditional to the Chicken Balti and Fiery Mexican vegan alternatives.

Founded in 1860, Warrens Bakery cherishes its past traditions, but is also set on an expansionist curve. Chief executive Mark Sullivan recently told business leaders: “We are the leading craft baker in the UK. We want to have 250 stores open over the next five years and go up to 1,000 in the next five years after that.”

The company, which opened its first franchise store in Mere Green, Sutton Coldfield in 2017, is now expanding into new regions by working in partnership with established local franchisees and currently has stores in England, Wales and Northern Ireland.

Warrens Bakery is convinced there is a gap in the market for a premium national bakery to emerge across the UK and reckons it’s the prime candidate to provide it.

“We aim to be the leading ethical franchisor in retail bakery,” a company spokesperson says.

“We are devoted to craft baking. Nothing makes us happier than using fresh ingredients, testing new recipes and handcrafting to knead or crimp the perfect artisan product.

“With our quality products, craft heritage and contemporary branding, we’re growing fast and we need like-minded partners to roll out our premium bakery brand nationally.

“There is currently a lack of choice for consumers and franchisees. We spent several years perfecting the franchise model and it represented a transformational event for us as we move towards becoming the UK’s leading craft bakery and generate significant employment possibilities.

“We offer an affordable franchise package, which includes in-depth training and much more. We offer high end craft bakery to high footfall areas.”

While bakeries are found on most high streets, experts believe consumer trends are shifting towards higher quality baked products. Craft baking is certainly a growing trend. Research by market research company IRI shows it has been rising steadily - up by 62 per cent since 2007.

The trend is apparently driven by families keen to get back into the kitchen and cook for themselves and also by celebrity baking shows on TV.

I knew nothing about baking

A Warrens Bakery franchise starts from around £18,500. This provides franchisees with a national supply chain, economies of scale and operational staff training and support. The company also offers food safety and health and safety courses, site design and project management, point of sale merchandising and £5,000 of opening marketing and PR.

The two-week training for up to four people is held at Warrens Bakery’s centre of excellence, which is supplemented by five days of preopening support and a further 10 days of post-opening guidance.

“I was very impressed with the Warrens Bakery business model, which is why I bought the franchise, but I have to admit I knew nothing about baking,” Robert says.

As part of its development programme to widen the company footprint outside the West Country, Warrens Bakery opened its first London store last year - the first stage of a plan to take the message to all parts of the UK.

“We want to get the whole ‘Bake Off’ population interested in craft bakery, as we’re not just about pasties, but also about craft bread and cakes,” Mark Sullivan says. So it was a canny move to enlist Martha Collison, the youngest ever contestant on The Great British Bake Off, as a Warrens Bakery ambassador.

Tradition going back to the 1860s

With over 150 years of baking experience, Warrens Bakery has gained major successes at the World Pasty Championships, the British Pie Awards and Craft Bakery Business Awards.

The company attributes its success to the provenance of ingredients and the dedicated team of master bakers that craft all its baked goods with care and attention to detail in a tradition going back to the 1860s.

That was when, in a story reminiscent of Thomas Hardy, a romance between two families - the Harveys and the Warrens - in St Just, the nearest town to Land’s End, resulted in the opening of the company’s original shop.

Miss Harvey, daughter of the local baker, met the son of the Warrens farming family, which resulted in the farm providing fresh ingredients from the fields and the baker making the pastry and baking the pasties.

The company’s headquarters are still at St Just. Today it employs over 600 people, including a team of master bakers, many of whom have been with Warrens Bakery their entire careers. Eight have 240 years’ service between them.

“The history of the firm helps to give us the human touch,” Robert says.

“We not only supply top class products with a heritage, but we also offer customers somewhere comfortable to sit and relax and enjoy the atmosphere. We have a large seating area with wi-fi and music. No other bakeries in the area have that.

“We provide something different on the high street and people appreciate it. We also pride ourselves on innovation, but I admit that pasties are still our pride and joy. They’re part of our history.”

1. Decide what sort of franchise you want. We felt that what would work for us would be a traditional high street business - and we’ve been proved right.

2. Research the market. Is the industry you’re planning to join booming or declining? Is it subject to seasonality? Is there much competition? Is it something that will interest and absorb you?

4. Meet other franchisees. There’s no better way of sussing out a business than spending some time with someone who’s already running it.

5. Get the right site. For some businesses, location is not all that important. For others, it’s everything. If you’re dealing directly with the public, it must be accessible, easy to find and have a regular flow of potential customers walking past.

6. Recruit the best possible staff and treat them with respect. Having the right team behind you has been the key to what we have achieved. Make sure they know they’re appreciated.

7. Give customers a great service. If they’re happy about what you provide, they will be your best ambassadors.

How much does a Warrens Bakery franchise cost?

We have a flexible format, ranging from kiosks through to large café sites, with a range that flexes to suit. Our fit-outs range from £50,000-£150,000, depending on size.

What does a franchisee get for their money?

National brand awareness for Warrens Bakery is growing rapidly, with many new franchise stores across the UK and hundreds of new bakeries planned to open within the next five years. The bakery was recently named the UK’s number one craft bakery and regularly appears in national media, including a recent feature on BBC1’s Saturday Kitchen.

What are your ambitions for the future?

With a rich heritage and an array of award winning sweet and savoury bakes, Warrens Bakery aims to be the leading ethical franchisor in retail bakery. It has recognised a lack of choice in the UK for consumers and franchisees, with a gap for a national premium bakery in small food to go, as well as larger café formats.

What kind of support do franchisees receive from Warrens Bakery?

The dedicated franchise team provide input on site selection and fit-out, as well as management training for operations, marketing and merchandising prior to opening. Post opening, we provide ongoing support, weekly newsletter updates and monthly auditing to ensure brand standards and maximised profitability.

What are the advantages of buying a Warrens Bakery franchise?

What does Warrens Bakery look for in a franchisee?

Warrens Bakery is set up for all types of entrepreneur, from small scale single stores through to multi-site territory opportunities. The key to our partner selection is drive, passion and entrepreneurial spirit.

Does a franchisee need any specific skills or experience?

Franchisees can be trained to run the operation with no previous experience. We currently have franchise partners from all walks of life.

How long is the Warrens Bakery franchise agreement and is there a right to renew?

An award winning journalist and author, Tony James specialises in business and sport

Start your own Warrens Bakery franchise

Send a free enquiry to Warrens Bakery for further information!